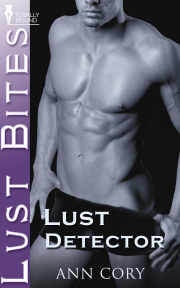 Caught again for speeding, Savannah Scott is surprised when Officer Alec Downs insists she follow him to the police station.

Worried she has gone too far with her flirtatious ways on the road, she obeys him and finds herself in a small room handcuffed to a strange looking contraption he calls the Lust Detector.

Savannah Scott pulled her cherry red Ferrari over the moment she noticed the flashing lights. With her manicured fingernails, she unfastened the top two buttons of her tight knit shirt low enough to show off her lacy red push-up bra. With hurried grace, she checked her lipstick and smoothed a hand over her perfectly coifed hair. From the mirror, she gazed longingly at Officer Downs as he sidled up to her car, dressed in his fitted uniform, his powerful legs well concealed. With a deep breath she put the window down, offering a demure look.

He nodded, face devoid of any emotion. “Ms. Scott.”

Goose bumps spilled along her skin at the close proximity of his cock, restrained tightly inside his pants, just beyond her door.

Reaching up, he removed his sunglasses, revealing his smouldering brown eyes. Eyes she imagined undressed her every time they had one of their confrontations. And to her delight, there’d been many.

Voice full of sweetness, she prompted him for conversation. “Pleasant day for a drive, don’t you think, Officer?”

He stroked the back of his neck, and switched the weight on his foot, swinging his groin closer in her direction. The gesture alone sent a fresh batch of goose bumps along her skin.

“Yes, it is. But not above the speed limit,” he added huskily. “We both know it’s thirty-five miles per hour through here.”

Savannah toyed with her necklace, the silver pendant circling between her breasts. “I know. I’m sorry. It’s the weather. My air conditioner at home is broken, so I came out here to cool down.” In a quick motion, she swept her hand across her chest and traced the neckline of her shirt, until she hit the swell of her breast.

If her eyes didn’t deceive her, his bulge grew bigger. From his shirt pocket he pulled out a pad and pen. This would be the tenth ticket she owned with his name scrawled on it. She loved everything about his signature.

Strong and stately, the way she pictured him naked.

“I can appreciate your need to cool down, ma’am, but this makes the third time I’ve pulled you over in a week.”

When she isn't concocting a magical seduction story, she writes poetry, reads, and spends time with her husband and son playing games and watching movies. She also enjoys interior decorating, cooking and making wine.

Ann Cory has crafted a tantalizing treat. I was swept away by the vivaciousness of the writing and was transported into the realm of possibilities...

A+! Lust Detector can be described in three words, short, sweet, and hot! There is nothing lacking in this very short read. Despite its length it will have you reaching for the nearest fan or man...

Share what you thought about Lust Detector and earn reward points.