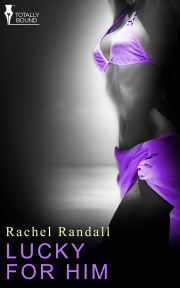 Take the risk to win the prize.

Industry rumours whisper that Argentinian billionaire Renzo Vega has invested in a secret project known only as 'Lucky'. Eager for his next challenge, entrepreneur Rob Ray tracks Renzo to his luxury yacht. Rob's determined to get in on the deal, so when Renzo refuses to meet with him, he stows away on the ship.

Soon Rob's sailing into uncharted waters with the most charismatic man he's ever met. And as the Mediterranean heat intensifies, he discovers that Lucky's not only real, she's a sexy ex-hacker with a talent for pushing all of his buttons.

She and Renzo want Rob to be their onboard entertainment. Now Rob just has to survive their attentions long enough to close the deal—and to make it back to port in one piece.

The problem with chasing rumours is that they’re nothing but whispers. Run down a rumour, and you might end up with nothing.

Standing in a luxurious lounge within the megayacht Estrella, watching his quarry hold court, Rob feels the now-familiar bite of frustration. He’s been trying to make contact with Renzo Vega for weeks now, using every personal connection and favour owed. Now he’s come in person, leaving London, tracking him from Vega’s headquarters in Buenos Aires here to the harbour at Valletta, Malta. And still Rob has nothing to show for it—not one meeting, not much more than industry gossip fuelling his chase.

Lucky, he thinks. Not so lucky for me.

Rob snags another glass of champagne from the passing waiter and considers his dwindling options. The ship’s due to leave at midnight, like bloody Cinderella. With it go Rob’s chances of making what could be the deal of his career. All he needs is one conversation. One shot at convincing the billionaire that he and his tech consultancy are more than up to the challenge of taking on Lucky, Vega’s latest and very secret project.

Yet Vega won’t take his calls. Won’t schedule face-time. Apparently he’s ring-fenced himself from formal business for the next six months to concentrate on 'personal projects'. Which, given Vega’s track record of off-the-cuff brilliance, makes Rob even more determined to get in on Lucky.

It’s proving more difficult than anticipated, though, to concentrate on the business at hand. One of the world’s wealthiest, most attractive men, Vega is always surrounded by the most beautiful people Rob’s ever seen. Not even his own bloody-mindedness can overcome distractions quite like these.

A gorgeous Indian woman in a gold silk sari, like a Bond villainess with her painted eyes and crimson mouth. A young man with razor cheekbones and a designer suit. A busty blonde, poured into spangled sequins and the highest heels he’s ever seen. The party guests crowd around Renzo, drawn by his charisma and held by his uninhibited laughter, until Rob can only see tanned skin and expensive fabrics and the red of his own irritation.

Reviewed by Erotica For All

I’ve read several of Rachel Randall’s books in the past and enjoyed them. This one was no exception. The storyline and setting in Lucky For Him are intriguing, as are the characters. T...

Share what you thought about Lucky for Him and earn reward points.