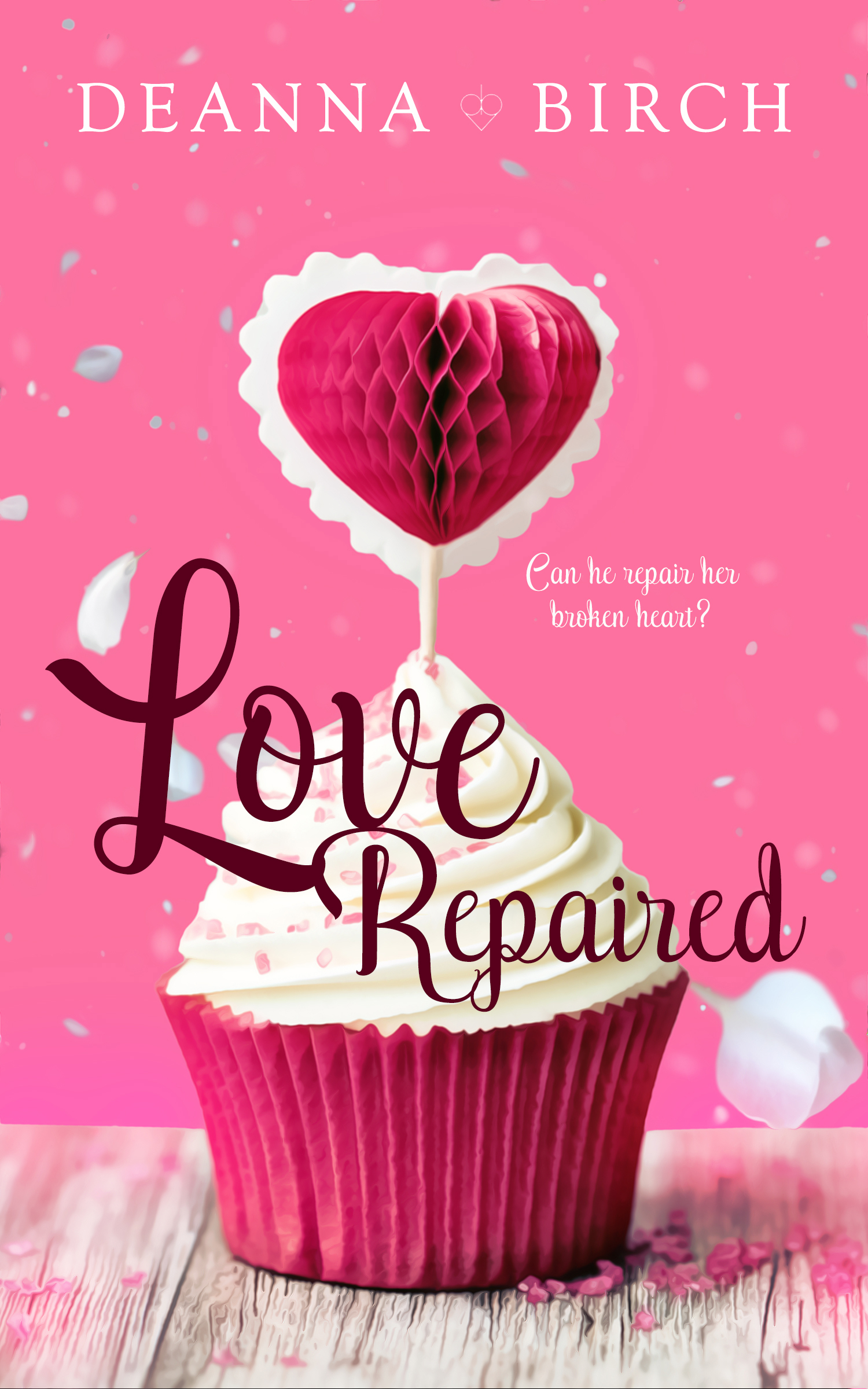 Attorney Amee sets aside her own needs to juggle the broken pieces of her life and family until mechanic Ben repairs her heart.

Divorce attorney Amee Benton—who has an ex of her own—is pretty sure she’s a #MomFail. Showing up late on a Friday night to retrieve her car from the shop and finding the pink frosted cupcakes she forgot to leave at her daughter’s ballet camp confirms it.

When mechanic Ben Mathis confesses to stealing one of the confections and asks who is taking care of Amee, she knows he’s a unicorn—a magical, beautiful beast who surely only exists in fantasies, so she tells him just that, with an F-bomb for good measure.

Amee has three things Ben finds irresistible in a woman—brains, a family and a serious potty mouth. During a chance run-in at Ben’s own personal hell, AKA the mall, he summons the courage to ask her out. Though Amee is leery of dating a younger man and Ben is more than aware of their social gap, the two take a chance.

But Amee’s life isn’t like his. And when her ex returns and the doubting divorcée blunders, all Ben’s insecurities are piqued anew. Now, Amee must prove to Ben that his worth is much more than stand-in dad and rebound boyfriend or she’ll watch her magical unicorn gallop off into the forest forever.

I parked the loaner SUV in line next to the other shiny overpriced automobiles, did a final check for personal belongings in the seat next to me—no need to learn the same lesson twice, my cell phone had spent the day in my car— and headed into the office. With the sun set, the cool evening air hit my cheeks and I perked up as I walked. My Cayenne sat in front of the large metal garage doors, a sparkle reflecting its recent wash. At least luxury came with attention to detail.

When I reached the glass door, I tugged it toward me only to find it locked. Jesus. I’d even failed at picking up my car. I stood on my tiptoes and rapped my knuckles against the glass. On the other side, the room was dark and the half-circular reception desk was abandoned, a black office chair pushed into its place. But from the hall behind it, a light peeked out—my ray of hope.

I knocked again and pressed my lips together while readjusting my shoulder bag. I shifted my body weight from side to side and banged louder.

Florescent beams flooded the showroom and I blinked. My skin flushed, and my mouth went dry. A legal aide at the firm had once said something about man candy, but I thought that was like a unicorn—not real, a legend in a forest I would never visit. But Man Candy had a warm smile, combed-back dirty blond hair and a build that screamed heaven through a tight, black, untucked work shirt. The last few buttons were open and matching pants hung low on his waist. He was also headed right toward me, tapping a wrench in his hand.

With dimples in his smile, he slipped the tool into his back pocket and unlocked the door. His sea-blue eyes must have been designed for skinny dipping.

“Mrs. Benton, I presume.” The low, scratchy voice matched the light stubble on his cheeks. His dimples deepened, and the warm showroom air hit my already-heated body.

“Ms.” I couldn’t resist the urge to brush against him, and as I did, the perfect blend of motor oil and earthy spice came with me.

I walked over to reception and placed the key fob on the desk.

He followed and squinted down at the neat paper piles next to the flat computer screen and keyboard. He picked up my keys from the tail of the stuffed squirrel that held them and dangled it like a time piece.

“Nice keychain.” After a quick arch of his eyebrow, the damn dimples reappeared with his tight-lipped smile.

“Thanks”—I glanced at his chest—“Ben.” I took the stuffed animal from his grease-stained hands and slid the other key toward him.

“Uh…no.” Add one more failure to my day.

Ben shook his head and grabbed the fob before popping it into a drawer. “No one ever fills it up. You know it costs double, right?” He peered up with one eye closed.

“Well, it was either fill it up or make you wait longer.”

“Either way, it’s my time. I’ll have to do it Monday.” He rubbed his face with both hands and a tattoo poked out from the tight sleeve around his bicep. His very full bicep.

I cringed and lifted a shoulder. “Sorry. Anyway, I only drove it to my office and back.”

Ben walked out from behind the desk and over to the door. Holding it open for me again, he motioned for me to leave.

I’m too young to suffer hot flashes, right? And I was not dreaming of ways to sabotage my brakes or engine. That would be silly—and a further inconvenience that my schedule would not allow.

“You had a failed fuel pump. It’s a pretty common problem. That was what was causing the stalling.”

Note to self— Get another failed fuel pump.

When we stood in front of my car, he pulled up on the handle, swung the door open, and I froze. A big white pastry box sat on the passenger seat.

“Pardon?” he asked with an airy chuckle.

I brought my hands to my face and pulled them down slowly, probably ruining the effects of the anti-aging cream I’d put on that morning. “Fuck. Fuck. Fuck.”

“Are you okay?” Ben leaned in closer.

“I forgot the fucking cupcakes. Fuck me. Fuck.” I let my bag fall off my shoulder and dragged my feet over to the steel garage. My back met the cool wall and I slid down to the rough concrete. I stomped my sensible beige heel before slumping into a ball and whimpering into my hands. My entire day, week, month… They had all been colossal fails.

The motor oil and musk were back, now touching my wrist and seated on the ground next to me.

“Shitty day?” He draped his defined forearms over his knees with his fingers interlaced.

“I wish I could say it was the shittiest, but it just seems to be par for the course. Fuck.” I stomped again.

“You have quite the potty mouth for a lady.”

“Did you just call me a lady? Oh my God, now I’m really going to cry.” Forgetting Shae’s cupcakes was the cherry on top of my botched-Mom sundae. But being one step away from a ‘ma’am’ was the rainbow sprinkles. Asshole-expensive face cream… It obviously wasn’t working. And I wasn’t even forty.

“You wanna talk about it? I’m a pretty good listener.”

If that were true, then Man Candy truly was a unicorn and I was in an enchanted forest. But the words flew out before I could stop them.

“My client lied to me and made me look like a fool in a deposition. I forgot my phone in the car this morning, which means my older daughter has probably called it three hundred times. And because I was behind closed doors with said lying client, I couldn’t call her.

“It was my little one’s last day at dance camp and I was supposed to bring the cupcakes. Which, as you can see, I did not do. Oh, and their father is in prison for vehicular manslaughter. Sorry you asked?”

He frowned and shook his head. “Where are they now? Your girls?”

“My sister takes care of them so I can keep working.” I wrapped the hem of my skirt around my legs.

“Who takes care of you?” The smile and dimples were gone, but the warmth stayed in his eyes.

“Me, I guess.” I shrugged and tried to recall any moment my ex, Pete, had ever really taken care of me, and I drew a blank.

He narrowed his blue eyes. “Is that enough?”

The beautiful stranger next to me had gotten as far as my walls would let him. Although, I had to admit, someone being concerned about me might have made a tiny crack.

“That and the half-bottle of Chardonnay waiting in the door of my fridge.”

“That’s depressing,” he said, getting up. He offered me his strong, rough hand and I clasped it. With a gentle yank, I was on my feet. “You ready for me to add insult to injury then?” He wet his lips and tilted his head.

“Oh, God. I don’t even care about the bill. Just tell them to send it to me.” I smoothed the front of my skirt and dusted off my rear.

“It’s not that.” Ben cleared his throat.

I scanned my car for a scratch or dent.

He continued, “I’m really sorry, but I ate one of the cupcakes.”

I darted my eyes back to him and he hunched as if waiting to be smacked.

“You eat cupcakes?” I leaned back a little. Whatever moment sugar had spent on his lips, it was not spending a lifetime on his hips. Bastard.

“It’s my cheat day. And those damn things were next to me in the car all day. Staring at me. Taunting me. Like, ‘Ben, you know you want me.’” He wiggled his fingers. “Then you were late, and, well…I made some kind of weird justification that I could have one. I’m really sorry.”

“You ate one of my daughter’s pink frosted cupcakes?” I planted my hands on my hips.

Ben nodded with a clenched jaw.

“You’re a fucking unicorn.” I picked up my bag, tossed it in the back and climbed into the car.

With the seat belt fastened, I reached for the door, but he held on to it stopping me from closing.

He blinked hard. “Did you and your potty mouth just call me a unicorn?”

“We did.” I smiled at the mythical man candy creature, shut the door and drove out of the enchanted forest.

Deana Birch was named after her father’s first love, who just so happened not to be her mother. Born and raised in the Midwest, she made stops in Los Angeles and New York before settling in Europe, where she lives with her own blue-eyed Happily Ever After. Her days are spent teaching yoga, playing tennis, ruining her children’s French homework, cleaning up dog vomit, writing her next book or reading someone else’s.

You can sign up for Deana's newsletter here and visit her website here. You can also find Deana at Books + Main here

Share what you thought about Love Repaired PRINT and earn reward points.