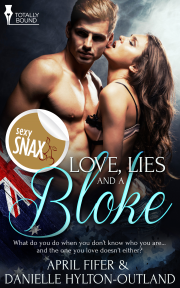 Love, Lies and a Bloke

What do you do when you don’t know who you are…and the one you love doesn’t either?

Katherine Thomas is a lackluster kind of girl who refuses to bend the rules. Until one day she loses her job and is forced to re-evaluate her life. One trip to Australia changes her world forever. She meets Brody, a hot and steamy man—in uniform. What she thinks is a night of fun and little lies turns out to be much more. One thing leads to another and Katherine realizes she’s in love. When an unexpected turn of events reveals Katherine’s true story, she must fight to make Brody understand that her love is real. Will she find a way?

Publisher's Note: This book was previously released as a self-published title. It has been revised and re-edited for re-release with Totally Bound.

“Next!” Katherine shouted from behind the outdated photo booth counter. “Please sit up straight and place your shoulders back.” Her voice carried through the building, and every time she spat out that same boring sentence it would be followed by a blinding flash from the camera bulb.

“Umm, can I at least smile?” the young girl asked, irritated and apparently over-confident just having earned her new license.

“No,” Katherine quickly said, then snapped the picture. The young girl stomped off speedily to what Katherine could only assume was the girl’s mother.

It’s a license, not a photo shoot, Katherine thought to herself. Katherine’s own license immediately popped into her head. Her chocolate-colored hair looked oily black and her deer-in-headlights look taunted her every time she had to display it.

Katherine Thomas was the photo taker, and she spent her entire day standing in the same spot and shouting out the same sentence over and over. She liked to call herself a ‘photo taker’ because ‘DMV photographer’ seemed a little overkill. There was nothing glorious about snapping people’s pictures on a camera that was older than her and having them come out looking like the customers were sunburned because the machine had too much red ink in it.

“Kathy… Kathy…” a man’s voice sang behind her.

Katherine rolled her eyes and finally turned to face her boss, Chuck. “My name is not Kathy,” she said through clenched teeth. He was a scumbag, and sleaze saturated every ounce of his aura. She could always feel him staring at her while she stood behind the photo booth.

When Chuck wasn’t treating her like she was an idiot, he was making sexual remarks to her. On two occasions, Katherine could have sworn he had brushed up against her ass on purpose. If she could have proven it, she probably would have nailed him square in the jaw.

“I need to see you in my office,” he sputtered.

“What an asshole,” Katherine said under her breath. She motioned for Janice, her co-worker, to come take her place. Katherine and Janice had worked together for a couple of years. Janice was very beautiful and sweet in nature. Katherine wasn’t really friends with her per se, but she did like Janice. Katherine had always thought that she had the cutest shape and gorgeous red hair.

The line for the photos wrapped around the waiting room, and it was twenty minutes before closing. That’s how it always was. No one ever showed up in the middle of the day. It was invariably after four o’clock before the building would become overrun with human bodies everywhere.

Katherine made it to Chuck’s office, and he was sitting behind his twenty-year-old desk made of solid oak. A vision of her leaping over his desk and strangling him flashed through her mind. She quickly shook off the image.

“Yes, Chuck?” Katherine asked as she stood there.

“We are getting some complaints about your behavior,” Chuck said.

“By whom?” Katherine demanded then thought of the teenager earlier that had been one pout away from throwing a tantrum.

“By some of the customers. You never smile, and you seem irritated all the time,” Chuck went on.

That’s because I am, Katherine thought to herself, but remained silent.

“This is a customer service job. You need to be more welcoming.”

“Chuck… I stand behind a camera all day taking driver’s license photos. It’s an assembly line. There is no customer service! If I stopped every person and asked them their life story, we wouldn’t close before nine.”

“Sorry, Kathy. This is going to have to go in your review. I think you should take some time off and really think about what your future holds here at the DMV. I have scheduled for Janice to take your place for the rest of this week. You can go ahead and leave now, and we will see you back next week.”

A smile hinted across Chuck’s face, and the vision Katherine had earlier of strangling him popped back up in her mind. Katherine stared at him for a moment, knowing what was to come next.

Danielle Hylton-Outland was raised in Virginia. She grew up having a huge appetite for daydreaming; always wanting to live in the spectacular worlds she created in her mind. She now lives with her husband and dog where she is pursuing a degree in literature. Danielle is a strong animal activist.

April Fifer grew up in a small town in Virginia, where it was common practice believing that dreams could only be found in stories. At the age of seven she was diagnosed with dyslexia. She was told that she would struggle through life and would never pick up a book to read for pleasure. Although school was hard, she was able to find her way with the help of two teachers who taught her self-discovery. Ignoring what she was taught growing up, she turned it around and found that your dreams could become stories.

Share what you thought about Love, Lies and a Bloke and earn reward points.