Ivan knows he needs to come out if he wants to keep Emilio happy, but will his past interfere with his future?

An ex-Army man now doing security consulting, Ivan Macer knows coming out will not be easy for him. Add an old flame who reappears and makes his professional and personal life difficult, and he has his work cut out for him.

Emilio Scarpino still cannot believe Ivan really doesn't mind his extra weight. But Ivan's steady devotion convinces him and when their separation during the week becomes too much to bear, he makes plans to move closer to his lover. He can only hope that this is what Ivan wants.

Can Ivan and Emilio develop enough trust to stick together in light of the attacks against Ivan's company?

Reader Advisory: This story is part of a series but can be read as a standalone title.

"I have to tell my dad about us as soon as possible." Ivan Macer wasn’t looking forward to the discussion with his retired Army father, but it had to be done. He owed it to Emilio so they could have the relationship his lover deserved, but more importantly, he owed it to himself. He’d hidden his true nature for far too long already.

"There’s no rush, sweetheart." Emilio smiled at him from across the small kitchen table where they were having breakfast. "I’m okay with giving this some time now that I know where you stand."

"I appreciate your understanding, but this has been a long time coming." He put down his fork, suddenly no longer hungry. "Now that I have a reason to come out, I don’t want to put it off anymore. Do you know what I mean?"

"I do. I just don’t want you to think you have to do it straight away. We’re good." Emilio picked up his coffee and leant back in his chair, slipping an adventurous socked foot under Ivan’s pants and sliding it up along his leg as he sipped the warm drink.

Ivan swallowed, sudden arousal flooding his body, making him tingle all over. They’d made love for the first time yesterday evening, had spent half the night exploring each other’s bodies in detail, and Emilio’s touch still got him hard within seconds. He was so lost.

"Are you sure you have to go into the office today?" Emilio’s attempt to look innocent was so overdone it was almost funny.

"I’m sure. I may co-own the company with Leo, but we’re still barely out of our first year, so we can’t lose focus." He pushed back his chair and rose, pretending he was about to leave.

"Okay." The corners of Emilio’s mouth dropped. "I guess I can entertain myself until you come home."

"I don’t have my first meeting until ten o’clock, though." Ivan grinned when Emilio’s face lit up.

He stepped around the table, put an arm across Emilio’s shoulders and bent down to kiss him. Emilio opened up immediately and heat flooded him when their tongues met and tangled. He tasted coffee, a hint of mint from the toothpaste his lover had used earlier, and the darker flavour of pure Emilio that he was quickly becoming very addicted to.

"Yes!" Emilio’s voice trembled as he slid his arms around Ivan’s neck and dived back into the kissing. 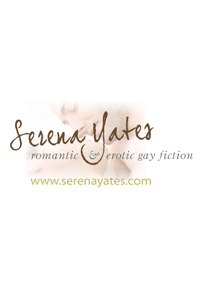 I'm a night owl who starts writing when everyone else in my time zone is asleep. I've loved reading all my life and spent most of my childhood with my nose buried in a book. Although I always wanted to be a writer, financial independence came first. Twenty-some years and a successful business career later I took some online writing classes and never looked back.

Living and working in seven countries has taught me that there's more than one way to get things done. It has instilled tremendous respect for the many different cultures, beliefs, attitudes and preferences that exist on our planet.

I like exploring those differences in my stories, most of which happen to be romances. My characters have a tendency to want to do their own thing, so I often have to rein them back in. The one thing we all agree on is the desire for a happy ending.

I currently live in the United Kingdom, sharing my house with a vast collection of books. I like reading, traveling, spending time with my nieces and listening to classical music. I have a passion for science and learning new languages.

Ivan and Emilio are one of the most endearing couples in the New Horizons series. Their love and passion is admirable and inspiring. It was good to see that they were able to make their dreams come...

Share what you thought about Liberating the Security Specialist and earn reward points.