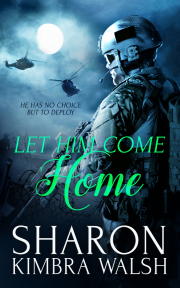 Her husband is going to war. Can she win her own personal battle to stay strong, not knowing if he will come home?

Military life is hard on a marriage. Melissa McCabe knows because she is wife to Delta Unit’s Master Sergeant Brandon McCabe. He has a heartless mistress—the US Marine Corps—who accepts no infidelity.

Melissa thought she had sailed through the hard knocks of being a military wife, but how wrong she was. Brandon is off to war again and it’s tearing her apart knowing he will be facing violent life-and-death situations, having to kill or be killed and she has a secret. But if she tells him, will the news distract her husband, making him lose focus and endanger his life?

The US Marine Corps is what Brandon is made of and he has the bloodied hands and boots to prove it. He has no choice but to deploy, but he senses something is wrong with Melissa—and she isn’t talking.

Once she shares what she knows, can she go on alone to face a bleak, empty life without him if he doesn’t return? Can she find the courage to move on to the next chapter of their future?

Melissa sat on the edge of the bed staring at the wall of her bedroom, chin resting in her hands and elbows propped on her thighs. She couldn’t remember the last time she had managed to sleep undisturbed and she was tired.

Fatigue clouded her mind, tension knotting the muscles of her shoulders and neck. Her nerves thrummed like live wires and she grew conscious of the fragility of her body, musing that a strong wind could bend and break her.

For the past few nights, she had been terrified to close her eyes. Whenever exhaustion began to tug her into its welcome embrace, a nightmare seized her defenses, tearing them down to leave her slumbering mind at its mercy. Even during the hours of daylight, the unrelenting attack haunted her.

Melissa sighed, straightened her aching back and glanced around her. Warm rays from a single lamp standing on a small oak table positioned on her side of the bed cast an amber glow across her body and immediate surroundings, leaving the far reaches of the room full of shifting shadows.

Her heart beating fast and hard and feeling uneasy, she searched the corners for signs that torturous shades from the nightmare had morphed into physical entities. Satisfied that her imagination was playing tricks on her, she swept her long dark hair back from her face to glance at her watch. Two and a half hours remained until Brandon was due home from his briefing.

That’s enough time for me to try to get some sleep, even if it’s only for a little while.

Sighing again, Melissa lifted her legs onto the bed and, bending forward, reached for a patchwork throw folded at its foot. She tugged it up and covered herself before lying down and turning onto her left side. Trying to relax each part of her body, she forced her limbs into the soft mattress, burying her face in the pillow so that it molded about her head in a protective cocoon.

She closed her eyes and, breathing deep and slow, thought of Brandon and when she would see him. Knowing that it would be the last night they would spend together for a long time, a sharp pang of sadness at her husband’s impending departure, surged inside her.

Struggling to suppress her emotional turmoil and blank her mind in order to receive the welcome oblivion of sleep, she eventually succumbed to the warm comfort of the throw and softness of the bed. Accompanied by indistinct background sounds that merged into the darkness spreading across her thoughts, sleep approached on gentle, nebulous wings, submerging wakefulness in its empty embrace.

Heavy rain beat a tattoo against the bedroom window with staccato drumming as gusting wind caught squalls of raindrops, slamming them onto the pane of glass. Wayward air currents fluted through the eves and whistled their journey along the guttering, fading to nothing before recommencing nature’s endless cycle. Muted hissing from a vehicle’s tires rushed past in the silent street, the sound similar to surf rippling over pebbles of a lonely, stony beach. Sounds dissolving and fading into…

The nightmare waited, holding its images of death and destruction in its formless claws. Lurking on the periphery of her sleeping mind, it was ready to infiltrate her weak defenses, sending peace and tranquility fleeing to the far corners of Melissa’s subconscious.

Stygian emptiness marred by intermittent flashes of red mimicked fiery shooting stars streaking across a sable landscape. Hollow, spectral echoes of discordant gunfire and an explosion, deep and drawn out, was followed by a muted grumbling, dopplering away to a low muttering. A burgeoning flickering, amber-red, expanded across the black dreamscape and men shouted, words tangled and indecipherable, voices full of fear and desperation.

A prolonged scream, the noise distorted, resonated from a living entity that had never been born to utter such a sound. A rolling wave of explosions obliterated all other noise, accompanied by roaring blood-red flames ripping the obsidian blackness apart. Vaporous crimson blood sprayed onto the inky shield of the surrealistic scene and the tortured, pleading shriek continued.

Wrenched from sleep, Melissa awoke trembling. Her skin was laced with goosebumps and she was disorientated and confused, unable at first to differentiate between what was nightmare and what was reality.

As if a band had been drawn tight around her ribs, she coughed, flailed her hands then grasped at her throat. Her labored gasps to breathe sounded loud and harsh in the quiet room and panic threatened to choke her.

Clenching her teeth together hard enough that her jaws ached, Melissa forced herself to concentrate on slowing her rapid heartbeat and at last managed to take in a breath. The tightness in her chest began to diminish and her muscles ceased their panicked revolt at the lack of oxygen.

When she opened her eyes, she recognized her surroundings and uttered a small moan of relief. Raising a shaking hand, she pushed a strand of tangled hair off her damp forehead before wiping warm, wet tears from cheeks that were hot, as though she was burning with fever.

She wanted to scream. If there were meanings behind dreams, there were numerous possible permutations underlying the recurring nightmare that was haunting her. While she knew the instigators of her troubled sleep were most likely apprehension and unease, understanding the cause did not diminish her fears.

She had no idea how long she had slept. Whatever the timeline, weariness tugged at her body and her thoughts remained vague. Her abdominal muscles were uncomfortably taut and her neck and shoulders were aching and stiff from lying in one position. Anxiety welled up inside her and suddenly her stomach churned sickeningly.

As nausea coiled in her belly, Melissa bit her lip and focused on the gold-flocked wallpaper decorating the bedroom wall directly opposite her. It shimmered with an almost hypnotic quality in the muted light and she thought it was beautiful—a lake of golden sunlight frozen in time.

She remembered Brandon’s response when he had first seen the glimmering rolls of wall covering. He’d said the words with a teasing grin on his face—‘Holy crap, Mel. That color sucks. Couldn’t you have picked something a little less…shit-colored?’

Melissa gave a small smile at the memory of his deep voice, a sound that always sent shivers up and down her spine.

That man has never been one to mince his words.

Restless and unable to concentrate, she dropped her gaze to the empty space beside her. Almost of its own volition, her palm slid across the cream silk of the quilt cover and onto the pillow where Brandon’s head lay when he slept beside her. She rubbed the fabric, her fingernails creating faint scratching noises against the cotton.

Leaning forward, she pressed her face to where her hand lay, in the hope of catching any scent of his that might have lingered. The odor of Brandon’s spicy cologne teased her nose and she inhaled. Eyelashes fluttering closed, she withdrew her hand from the pillow and placed it on her lower abdomen.

Sharon spent eight and a half years in the Women’s Royal Air Force. Originally based in London, after she met her husband, Sharon relocated to Scotland to settle in Edinburgh. Already loving the country after having been stationed there during her time in the military, Sharon has never looked back. She lives with her husband and rescue West Highland Terrier, Snowie, (who thinks that she is a Rottweiler in disguise).

In 2014 Sharon started to have visions of writing a contemporary military romance. The ideas started to pile up and there was nothing for it but to get them down on her laptop, regardless of time and place.

You can take a look at Sharon's website here.

Share what you thought about Let Him Come Home and earn reward points.