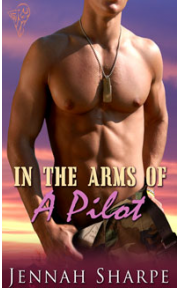 In the Arms of a Pilot

She found the touch she missed in another pilot, but the guilt could prove too much to bear.

Emmeline hated the thought of her man going off to war, but that was something she needed to keep to herself. When she received news that he was MIA, she didn't fall into grief as she thought she should have. Instead, she went looking for the arms of another man.

Reader Advisory: This story was released as part of the Camouflaged Hearts Anthology by Total-E-Bound

The day was warm enough to need a hat for sunshade but cool enough that I wrapped my navy cardigan around my shoulders.

I stopped for lunch in a little bakery on the main street just over the bridge from Rose’s cottage. I couldn’t resist the scent wafting out into the street. I didn’t speak to anyone inside, yet the local crowds watched me closely. Pond Hollow was a small town, full of closely-knit people and the patrons of the bakery were no different. It was obvious to me, that I was the stranger in town and that my actions right then would be my first impression. Where they wondering why I was staying with Rose? No one asked. If they wondered what my intentions were with the bachelor who owned the farm, it didn’t come up. I knew I would have to be very careful what I said to Rose. Word would definitely get back to town. I decided to keep my thoughts about Ethan to myself.

It wasn’t until after dinner that I noticed a lantern glowing in the loft of the barn. Ethan’s broad form cast a dark shadow across the boards of the loft. Sitting in my room reading a Jane Austin novel, I suddenly had the urge to talk to another human being and my gaze kept being drawn to his fluid shadow in the barn. Rose unfortunately was no conversationalist but that was no matter. I missed having a male in my life. That decided it. It wasn’t a sin to want male companionship, was it?

Ethan was pitching hay from the loft of the barn down to the cattle. He was shirtless, his skin smooth and brown from the sun. I watched quietly as he smoothed his dark hair from his forehead. It stuck up momentarily before flopping back down in his eyes. He was the epitome of masculine form.

He grinned at my obvious foolishness. “We’ve met,” he said quietly. I’m sure he thought I didn’t notice but his gaze was appreciative as it flicked over my body. I’m sure my face was as red as a cherry, but he gave no indication of noticing. At least he found me somewhat attractive.

Right that moment as he gazed at me with such intensity, I’d never been lonelier for someone to put his arms around me. It seethed inside me, threatening to pour out all over him.

“Right then. Have a good day,” I said, backing away. I wanted him more than anything, but the prospect was also terrifying. I would essentially be having an affair. My mind was in turmoil and completely at odds with the feelings in my body.

I turned toward him. “Yes?”

“I’m just on leave.” He straightened and leaned on his pitchfork.

“I’m aware of that,” I said hesitantly, wondering what he was getting at.

“And you’re promised to another.”

I crossed my arms over my breasts. “What’s that got to do with anything?” I hadn’t said anything about my attraction out loud.

“It’s why there can’t be anything between us.” His gaze didn’t leave mine.

He bowed his head and kicked at a pile of straw. “All but.”

“You seem to know an awful lot about me.” I took the opportunity to walk closer to him.

“We’re both lonely, Emmy, and you’re quite beautiful. I saw you watching me, and I just want you to know where I stand.”

“Do you say this to all the girls?” He blushed then and I felt I had some semblance of control over the conversation. I pushed him a bit more. “Did you tell Rose the same thing?”

“Rose is like a sister to me. We practically grew up together and she doesn’t have the need inside her that I see in your eyes. And such lovely blue eyes they are, Emmy.”

I was close enough now to feel his breath on my face. He smelled of sweet hay, sunshine and sweat. It was a heady mixture. It struck me just how much I missed someone touching me, someone wrapping their arms around me. The feeling was something Will would have understood. I’m more than sure he would have wanted the same thing for himself, if I were lost to him. He would have taken the opportunity, I told myself. And so would I. I reached out to stroke Ethan’s upper arm. He didn’t move, but his breath hitched in his throat.

Jennah Sharpe is an author, mother and traveller who can be easily seduced by mint chocolate. Her imagination often keeps her up at night but it certainly makes for an entertaining life. She lives in Canada with her soul mate and two young children.

This was an enjoyable historic read for me and I couldn't help but fall in love with Ethan...I'm new to this author and I look forward to reading more from her in the near future.

Share what you thought about In the Arms of a Pilot and earn reward points.