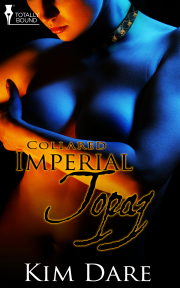 Garrett knows there's only one man who can guide a natural submissive like Lucy into a world of kinky clubs and kinky sex, and that man is not Shane.

Garrett's watched Lucy for weeks, waiting for the perfect opportunity to show the natural submissive just how much fun submission can be. He knows Shane - and he knows how he treats women. When he overhears her accept a date from Shane, Garrett has no choice but to step in.

There is only one man Lucy's going to the Labyrinth with and it's not Shane.

“If you’re too prissy for a bit of kink—”

“I didn’t say that,” Lucy Prichard cut in.

Shane Collins tapped two tickets to the Labyrinth on the coffee house table. “Do you want to go with me or not?”

Resting a tray of empty coffee mugs on her hip, Lucy hesitated. She had no doubt that Shane was a truly objectionable little man. He always looked her straight in the cleavage and left his empty mug on the far side of the table so she had to lean over him to reach it, but at the same time...

“It’s the most exclusive kink party there is.”

Lucy didn’t need Shane to remind her of that. She’d spent so long daydreaming about the club, sometimes it was hard for her to remember she’d never actually set foot in the place.

She carefully weighed her options. In some ways, her complete lack of attraction to Shane made him the perfect companion for her first foray into a kinky club. She could go there with him, safely sure she wouldn’t submit her way into anything regrettable.

And, well, if Shane did desert her half way through the night, that wouldn’t be so bad either. Lucy was sure she wouldn’t object to doing a little bit of exploring on her own, once she was safely inside the building and had a chance to get her bearings.

If she had any sense, she knew she should pick the safe choice. Because, if she went there with a different man... She nibbled on her bottom lip, nervous energy spiralling inside her at the thought.

If she went to somewhere like the Labyrinth with her nameless, faceless fantasy man, anything could happen. If she went with the man she thought of whenever the guy screwing her was the only one having fun, Lucy knew she just might do anything and damn the consequences.

She looked Shane over one more time and made her decision.

“I don’t have first date sex.”

“What?” Shane’s eyes narrowed. He actually lifted his gaze from her breasts for a few brief moments and looked her in the eye.

“Fine,” Shane huffed. “Meet me outside the club at ten o’clock.”

He thumped the empty coffee mug down near the edge of the table. “Get me another one. Don’t stint on the sugar this time—last one you gave me was bitter as shit.” Shane turned to his laptop as if that was all it took to write her out of existence.

Lucy cleared her throat. “Is there a dress code?”

Shane didn’t even bother to look up. “Short, tight, leather.”

Lucy shifted the tray on her hip. As much as she hated to admit it, she didn’t really know what information she should try to extract from Shane. All she knew was it felt as if she should ask a lot more questions before stepping into the unknown with him.

“Is there anything else I need to know?” she asked, when she realised she could stand there all day before Shane chose to volunteer anything else.

“No. Stop asking stupid questions, some of us have important work to do.”

Lucy resisted her instant temptation toward sarcasm and pretended the customer was always right. Turning away from Shane, she glanced at the surrounding tables. She breathed out a quiet sigh of relief. No-one staredat her. No-one had overheard their conversation.

The only customer sitting close by was Garrett Quinn. He appeared completely absorbed in his laptop, his fingers bouncing off the keys at a furious pace. On the way past his table, Lucy noticed his empty cup.

Garrett looked up from the screen and handed her his cup. “Yes, thank you, Lucy.” A frown marred the usually smooth expanse of his forehead. Lucy somehow resisted the urge to lean over and kiss it away.

He smiled up at her like he could read her mind, like he knew exactly how hard she always found it not to reach out and touch him. Familiar heat raced to her cheeks. Lucy quickly retreated as calmly as she could to the counter and filled their orders.

Damn! She had to learn how not to blush around him. Okay, so he was handsome. In the words of another waitress at the coffee house, Garrett Quinn was knicker-droppingly handsome—which was apparently the same as jaw-droppingly handsome but far more fun.

The dark hair, broad shoulders and lopsided smile were all very nice. But deep down Lucy knew that wasn’t what held her enthralled. Garrett Quinn looked like someone who didn’t play by the rules. Or, even more interestingly, he looked like a man who set the rules and then expected his lovers to obey them.

Lucy has a fantasy and Garrett is more than willing to lead her there but he sure isn't giving Shane a chance to move in and hurt her. Her dreams come true and now they have to figure out if there...

Share what you thought about Imperial Topaz and earn reward points.