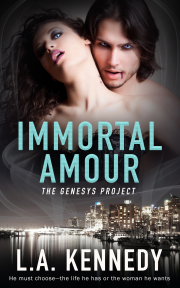 Book 1 in the The Genesys Project series

Leading a fierce battle to protect his race, Cael must choose between the life he has and the woman he wants.

Fiercely loyal to his men, Cael has sacrificed himself for the good of the race. Undercover as the Calyph, he has lost everything he’s ever loved and wanted in an attempt to smoke out the Genesys before the irregulars are extinguished. Now he will sacrifice again to save his one true love.

Cael has always been savage by nature, quick with temper, quick with violence. It takes finely tuned control to keep his Vampyre instinct from taking over and consuming the little bit of humanity he still clings to. Cael is no stranger to loss. He knows that painful fury all too well. But when his Fyrvor, his one true love, goes missing, he pities the SOB who took her. With ice in his veins, he swears vengeance.

Des has worked her fair share of cases as an agent for the Netherworld, policing the little slice of in-between, where life and death, man and monster, are as subjective as ivory and eggshell. She is a Kler’voient—a Prophetyc, born with a second sight limited to the past. They call it a gift. She calls it what it is—a burden and a curse.

Cael is deep undercover and sinking into the darkness of his sacrifice. Des doesn’t want cannon fodder in her life. That alone would make their relationship difficult enough without them being the prime target for the Order, who are hatching new strategies for wiping the irregulars off the face of the earth.

Darkness had this way of stealing the truth. Des was thankful for that, as she stared down at the ruined remains of what she thought had been a man. There was so little left. It could have been just about anything, including an animal carcass. She was pretty sure a small cow hadn’t been tossed off the beaten path, which left only one thing. The broadness of the shoulders, or what was left of them, told her it was a man—was, the key word. It once was a man. In the pitch blackness of the summer night, the blood took on a different color altogether. Black liquid tar pooled under the bloated remains.

Desdemona Bloodworth—Des, to those who knew her—had worked her fair share of cases for The Netherworld, policing the little slice of in between, where life and death, man and monster, were as subjective as ivory and eggshell. Born a Kler’voient, a Prophetyc, she was born with a second sight. To her chagrin, her sight was limited to the past. They called it a gift, a rare and valuable talent, so she’d been told. She called it what it was—a burden and a curse.

Her curse, like a coin, had two sides—one side for good and one side for evil. Should she choose the wicked and shiny side of the coin, Des could control thoughts, giving someone memories that made them jump off a bridge or into the path of an oncoming train. Alas, she chose the good side, the dull and virtuous. And there was nothing nearly as fun with the side that landed on morality. On this side, she was the one that was left with the memories and the desire to toss herself in front of a train.

Des was the end result of what had happened when an angel and demon crossed the unspoken line, creating what the Orygin had forbidden. She was good and evil, yet neither, with the ability of both. With a soul that sits in Pergetore, she tried to earn the feathers on her wings to pull her soul out of there. So far, not so good, case in point, she’s still fucking here.

A deal struck between the Orygin and Ruynous said that the winged couldn’t be locked away in Hades and half-breeds could not walk the earth in full power. Each good deed earned a feather for a set of wings only Des’ soul could see and feel. A full set would force the Wardyn to expel her soul and she’d be home free. Until then, Des and her soul were stuck in a perpetual rerun of a shitty reality TV show called life.

The Netherworld had been in existence since mankind had become perverted, spitting out beasts and burden. An irregular gene had been activated by the Genesys, the creator of the Rancor Order, for an absolute unquestioning army. He’d tried to play God and screwed them all. Anyone who had been born with this dormant irregular gene had become something more and less than man. Cue the reason the Netherworld had come into existence.

The Netherworld was similar to any other police task force, roping in those who broke the law. Only this flavor of criminal had fangs and claws. Fangs and claws were what Des hated the most. Pesky little things they were. The locals called in the twisted and perverted her to help catch the twisted and perverted them. It was the circle of life around here. Des wasn’t one to complain, much. It paid the bills and for the therapy that she should be going to.

She worked some of the most gruesome cases due to her ‘gift’. Most people were rotated off the grisly and heinous crimes every few years, human or not, or they washed out and crawled into a bottle. She was burned out and had already been in and out of a bottle or two.

But here she was, at midnight, leaning over the remains of a body, bloodied and left for the birds and critters, trying to earn another feather for a set of wings she couldn’t see.

The body lay on its side. Claw marks ran down the back and front of him, like a hot knife through butter. The pale white skin, drained of blood, had been sliced and gouged, ripped from the bones and laid over him like a safety blanket. Innards had been spilled onto the gravel, still shiny in the moonlight, reflecting the stars and flashing police lights. It was almost beautiful, the still calmness only death can bring, had it not been for the whole ‘dead and torn up’ part.

The second body lay roughly ten feet away. Des’ eyes focused on the lumpiness of his remains, like a sack of red, broken potatoes. It’s odd how your mind will focus on trivial facts, she thought, noting the oddities that came to mind, like how dirty the intestines were or how the hair wasn’t messy enough. For a moment, she wondered where he had his nails done. Her brain tried to pull away from the horror with thoughts that didn’t matter, thoughts that kept the truth of what she was looking at, at bay. It was an irritating fail-safe when she was on the job and the job was dealing in horror.

The second body had been ripped open, his chest splayed and insides removed completely, leaving him an empty sack of what once was a person. Des had stared at him, not a drop of blood had touched his perfect face, but the horror of the night was etched deep within it. She wouldn’t forget the look frozen in his glossy eyes and slackened jaw.

In daylight or utter darkness, some things couldn’t be lied about. Fear was fear. It didn’t matter how much light shined down. Fear didn’t care what kind of spotlight it was under. Fear was like Mother Nature. It didn’t think twice about wishes or timing. It just was. It had its own timeline, its own needs, and it didn’t give a shit about anyone else’s. Fear didn’t discriminate. It didn’t hate or care. Fear was fear for all. Fear hung in the air, coating skin like jelled sweat—like the remains of Mother Nature’s fury.

The bodies were lost under the canopies of the trees. Des rubbed the goosebumps from her arms, grateful that she didn’t have to stand beside them—smelling them, seeing them and mourning their deaths. From yards away, she could disassociate, divorce her emotions from the heinousness of the night. From here, each could be an ‘it’. She could lie to herself at a distance. From here, they could be bodies and nothing more. 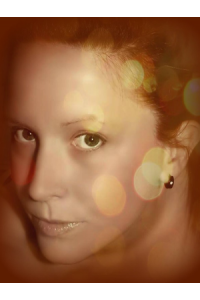 Share what you thought about Immortal Amour PRINT and earn reward points.