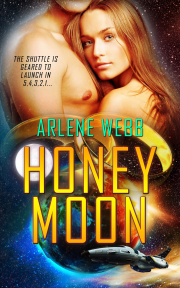 On crowded Earth, people are thrilled as technology expands to colonize space. When a prominent dating site offers the chance for a better life, thousands apply to hop on board.

Owner of a famous political blog, Sam Dexter understands how to qualify to win a ride to the moon. What he doesn’t get is why it’s offered to so many. With a bride on his arm who hasn’t a clue concerning his real identity, maybe he can learn. Not as though much can go wrong through pretending to be in love with Laree and conning the woman into helping him, right?

Jenna Jensen is terrified. Fear concerning the potential fate of lovers worldwide is steadily growing in her mind. Shuttles geared up to launch, there’s little time to find proof of something nefarious. What she needs is to warn a naïve groom or two. After all, meeting up with a stranger and convincing him to help has to be safe, doesn’t it?

His vision assaulted with vibrancy of dress—shapes and color—Sam worked his long frame down the walkway teeming with humanity. Agoraphobia not his deal, the occasional step on his heel or elbow to the side was nothing to raise blood pressure over. He loved to watch faces, more often seeing beauty and grace instead of conformity and ugliness. Young and old voices jabbered—talking into the wireless connection bubbled about their mouths and directly streaming to their wrist phones—while face-spacing with either an intimate, mini-hologram projection or going pictureless to chatter into the thin, congested air.

The most furious voice drew Sam’s attention. The man ahead came to a halt, jarring the foot traffic moving toward the malls and the train lines, to stare at his arm. His bare arm. No wrist phone. The woman a few steps behind the victim stopped as well. Snarling at the people jostling on by with apathetic disrespect for the worldwide Good Samaritan code, she used her phone to snap pics of the young woman attempting to blend in with the group branching away from the shopping center toward the bullet trains.

Sam sighed and eased around an elderly couple to follow after the thief. People were ignorant and desperate. The vast criminal underbelly would snatch up a wrist phone, yes. But the thief would be lucky to get a week’s rent in a cubicle shelter and maybe a couple of meals.

Odds were the woman who’d used one hand to grope a man, distracting him so she could slice the phone from his arm and hustle out of his reach, would be ID’d and tracked down within minutes of her picture pinging into World Security. Was stealing such a personal item worth five to twenty years behind bars?

Sam mentally shrugged. Based on the fact the victim still had two hands, at least the thief either hadn’t used the latest switchblade to hit the streets or she was damn good. Micro-thin, the blade—known as the diamond-killer—could hide in the palm of a hand like an old-fashioned razor blade and cut through standard wristbands as if pliable metals were tissue paper.

He instinctively tucked his arm closer to his side, hand shoved in his pocket, and glanced at his own wrist phone. Made from inexpensive aluminum alloys processed under super high-pressure torsion, it was strong and incredibly lightweight but vulnerable to the latest weapons. It took a precise and controlled criminal to wield the diamond-killer, withdraw after just a nick through the band, kissing the skin to leave beads of blood but before the weapon chomped through muscle and bone. Hence the range of severity of penalty in this day and age of not if, but when, the perp was caught.

No matter the evolution of the human race, it seemed young and stupid remained constant. Too bad he, despite being in his mid-thirties, still clung to that juvenile mentality of thinking himself invincible, too clever and savvy to ever have his precious neck land on the chopping block. A terrible attitude when preparing to take on supreme forces that may or may not be evil.

Powerful lobbyists, groups of brilliant minds, rarely confronted the slightest infractions done by those behind the world governments, so what chance had a single idiot? Yet how could he pull someone else into his worries? He really should come up with a diabolical scheme that didn’t involve a duo, but time wasn’t on his side. If he was going to make a move, he had to stop dithering and set in motion the only idea he’d had to get a handle on his growing paranoia.

But what type of bastard seduces—then risks—the life of an innocent? Assuming he managed to bring a horrendous conspiracy into the light of day, it’d be highly unlikely he’d avoid the bullets the moment the prospective villains—either riding that free rocket ride with him or waiting on the moon—understood that he was the whistleblower.

I don’t know what else to do. The deck was stacked one way or another, but with stakes this high, he couldn’t live with himself if he didn’t at least try. To quote a fictional hero from years past—‘The needs of the many outweigh the needs of the few’. Too bad he couldn’t respond like a famous Vulcan and give the answer—‘or the needs of the one’—meaning it was only his bachelor ass on the line.

I need to find a woman. ASAP. Get down on my knee within the month.

Sam pressed on, angling his way to catch the train to take him to his new, one-room lair. Ten minutes of shallow breaths—glad colognes and perfumes were banned on the trains but geez, did someone really have to eat, say…cabbage soup before they went out in public? He happily disembarked.

His building was slotted in an endless row of the same. Sweat coated him by the time he reached the fourteenth floor. Should have taken an elevator, but at least the stairs belonged to him. Any of the elevators in this skyscraper would be packed worse than ants on a dropped ice cream, and he loved the exercise. He regretted reaching his level, causing yet another excuse to drag his heels on bringing the hunt for a fiancée to a close. He was about to embark on a quest from which there’d be little chance of turning back with his freedom, let alone his heart, intact.

He scanned his wrist phone to unlock the door and entered the eight by ten room. This hop online would most likely turn out to be the most asinine thing he’d ever done. He marched the three steps directly to the com-desk, sat and clicked on the icon linking him to what appeared to be a popular dating site.

Christ, I should have done this a week ago. Over a hundred million hopeful saps like him were trolling Arrow to the Heart in this moment. Eight thousand, one hundred and twelve and counting in his current city. Ever the optimist, he wondered, was it lame to think that maybe, just maybe, if he was honest and opened up, he’d find someone to do more than use? A sweetheart to love and cherish?

Right. Then involve this sweetheart in the nuttiest of conspiracy theories.

His fingers flew, tapping away on the flat desktop monitor. Took him three minutes to open a basic want-to-hook-up account. Two minutes too long, but the server was loaded with dreamers.

Sigh. On to the personality profile. Sam only had to lure someone into saying yes. He wasn’t worried about winning the amazing newlywed lottos being offered, looks, money, or even finding instant love with the potential to endure the test of time. That’d be too much to ask. A woman with integrity, compassion and some balls? Not literally, but willing to take a huge risk for the greater good. Surely that was feasible? 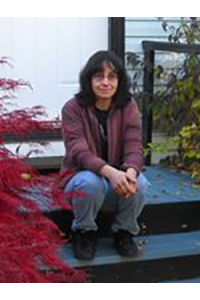 Sci-fi, paranormal, thriller-mystery, indefinable—I’m an author who adds sweet and spicy layers of romance to any genre.

I was born in upstate New York, USA, land of cows, snow, drizzle and sometimes a ray of sun. I spent my childhood reading whatever I could get my hands on. Adolescence found me questioning the validity of everything I read. Early twenties, I headed for the Pacific Ocean. A stop off to visit a friend turned into years in Tucson, Arizona. My late twenties found me running family owned greenhouses and florist shops back in New York. When the reality of retail life became too mundane to handle, I began an obsessive love of creating more interesting worlds.

Share what you thought about Honey Moon and earn reward points.

Do authors and readers, earthlings and extraterrestrials, live in an amazing age or what? Publishers are listening and accepting submissions as readers show they don't care if genres mix. Doors and closets are not just flung open, they no longer exist.