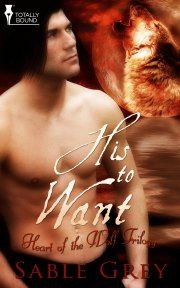 Book 1 in the Heart of the Wolf series

She makes a deal that could deliver her from debt but could also ruin her reputation, as well as her heart.

Cadence Hurst, desperate after hearing of her husband's death, goes to Victor Ashton and strikes a scandalous bargain: seven days of sex in return for having her husband's debts paid. She's heard the rumours of Victor's devious behaviour and is willing to submit to his every sexual whim but when she learns of his true secret, can she submit her heart?

Victor Ashton didn't expect to find himself falling for Cadence Hurst after just seven days. When her husband resurfaces alive, how can he make her his to want?

Clasping her gloved hands in front of her, Cadence Hurst sat pensively waiting in the corridor of the Ashton House. Two storeys of stone and brick, the manor was impressive and reflected the wealth the Ashtons of London were known for. The floors shone, scrubbed clean, and there was the faint scent of lye soap in the air. The only light was the sunrays that filtered through the large windows at the ends of the corridor. No tapestries. No rugs. Impressive, but rather boring, she decided.

“Lord Ashton will receive you.” The servant woman returned and offered a small smile from within her ruddy face of wrinkles.

Cadence stood, leaving her bag by the bench and stepped into the room. Her gaze swept past the floor to ceiling bookcase that covered one wall to the un-ignorable man who sat behind a massive desk. As he stood, her throat closed. Tall, broad shouldered but leanly built, Victor Ashton’s presence was as immense as his home. Sharp features beneath thick dark hair and an intense gaze nearly rooted her.

“If I’d expected your visit, I would have greeted you myself.” Long legs carried him around the corner of his desk.

She forced herself to move forward, steeling against the fear that shook through every vein. “Would you, Lord Ashton? I find that shocking, given it was your hand that struck my husband to his death nearly seven months ago.”

He halted, his gaze narrowing. “You are mistaken, Lady...”

“There is no mistake.” She retrieved the parchment and held it out. “It was one of your ships, the Maiden Rowley, that attacked. I have my husband’s first mate’s account of the incident.”

His step quickened, closing the distance between them, long fingers reaching out to snatch the parchment from her hand. His lids lowered, and he read the account silently while Cadence watched his expression for any indication of guilt.

“I assure you that this is a mistake, madam.” He spoke without looking up. “My brother would not wage an unwarranted attack on any ship. I shall send for him at once so we may clear up this...misunderstanding.”

“How long will it take for him to arrive?”

“Three months at most.” He turned and dropped the parchment to his desk.

“And I am to do nothing for three months? My husband is dead, Lord Ashton. I am left burdened and...” Her words faltered when he half turned, his gaze narrowed and filled with suspicion.

“Exactly what is the reason for your unannounced visit today, Lady Hurst?”

Cadence wet her lips. “Widow Hurst, sir, and I mean to allow you the chance to rectify the situation.”

He faced her fully. “By rectify, you mean you wish me to give you money. I am not an ill-educated man nor am I lacking in the sense God gave most men. I can see you are here to dip into my pocket. And just how much is your husband worth to you, Lady Hurst.” The dryness of his tone made her wince.

“Now that my husband is deceased I am left with his debts and no money to pay them. His family refuses to take responsibility.”

“How much?” he repeated.

She took a breath. “I am here to secure employment that will allow me to pay off his debts myself.”

“Get out. Have the constable come and charge me for any crimes you believe I’ve committed.” He returned to his desk, settling in the chair.

“I beg you to reconsider, sir.” She rushed forward to stand across from him. “I learn quickly, and this place is big enough that you would not even know I was here.” 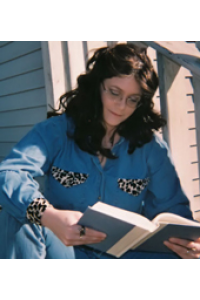 With favourite authors like Stephen King, Piers Anthony, and Iris Johansen, it's no mystery where the inspiration to write tales of love, adventure, and mystery come from. An avid reader and storyteller at a young age, Sable began writing small stories as a child for her mother. However, it wasn't until she was well in to her twenties that she realised that her calling was sharing her stories with a larger audience than just family members and friends.

Share what you thought about His to Want and earn reward points.

Other books in the Heart of the Wolf seriesView Series Page