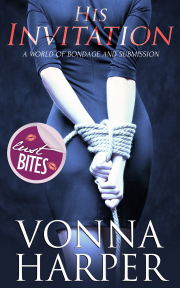 An unexpected invitation to a wilderness lodge leads Meka Morgan into a world of bondage and submission ruled by a dark, commanding man.

Despite her reservations, overworked Meka Morgan accepts an invitation at an isolated lodge promising freedom from responsibility and an overbearing boyfriend.

But freedom is the last thing she experiences, starting the moment her darkly handsome and mysterious host closes his hand over hers. Seconds later, she’s pinned to his powerful chest.

Who is this man and what are his plans for her? Will she ever be free, and does she want to be?

Publisher's Note: This book was previously released elsewhere. It has been revised and reedited for release with Totally Bound Publishing.

Sometimes the gods get it right, Meka Morgan concluded as she drove along the densely treed road. In a random world where bad things happened to good people and bad people got away with murder, once in a while, the good guys won. At least they’re handed something that makes them think they have.

For the umpteenth time, she glanced over at the ornate invitation on the passenger seat. Then, as she turned her attention back to staying within the narrow, deserted lane, she smiled. Given recent unreal job stress and one Bruce Wisdom, it was time something went her way. Maybe the best part of the whole thing was that thanks to the unexpected invite, she’d been given an excuse to get out of town for the weekend. No more working overtime while wondering what had happened to job security, in addition to admitting she should have seen Bruce for what he was long ago.

A girl can dream about some major escapism.

“It’s certainly large, for being so remote,” she said a half-hour later. “I never expected to see—”

“Its distance from civilization’s complications is part of its appeal. We aim to make everyone’s time at the Getaway memorable.”

“I’m sure it will be. And to think I won—the weird thing is I don’t remember signing up for an all-expenses-paid weekend here.”

“Maybe, but I can’t think who. Surely it’s no one from work. Like me, they have all they can do to keep their heads above water.”

“What matters is that you’re our guest, hopefully a satisfied one by the end.”

Even as Meka nodded and smiled, she wondered how she was going to take her gaze off the man she’d just met long enough to give the mountain lodge’s main room the attention it deserved. Given what she’d gone through with the man she’d thought she’d be marrying, she shouldn’t want to be anywhere near a member of the opposite sex. But this man—had he told her his name?—all but oozed sex appeal.

Gads, getting turned-on—just what she didn’t need on top of a day so busy she hadn’t had time to change out of her office attire before heading up here. On the other hand, maybe there was the slightest possibility her host was feeling the same vibes. Hmm. How can I find out whether fraternizing with the guests is allowed?

Not seeing anyone else in the cavernous main room, with its many chairs and couches, massive rock fireplace, beam ceiling and masculine wall decor, was a little disconcerting, but there’d been a number of cars in the parking lot, and muted music provided a calming backdrop. Besides, with this particular welcoming party of one promising to take personal care of her, what more did she need?

How about a man you can trust?

Forget that. How about nothing more complex than having a particular fantasy come true?

Leaning back in the oversized leather chair he’d selected after directing her to an adjacent plush couch, he regarded her. He wasn’t exactly undressing her with his eyes, but his gaze said she was more than a prizewinner to him—like maybe his prize.

Determined to beat him at his game, she stared back. Two, maybe three sanity-saving seconds later, her pussy began heating. How’d you like to drop into a certain long-running dream of mine? Provide the distraction I badly need in my life. Maybe a little role-playing.

Although he wasn’t the most handsome man in the county, thanks to a five-o’clock shadow, shaggy black hair and big hands, there was no denying his appeal—and danger. Men with only a thin veneer of civilization, male with a capital M, had always rattled her, which was in part why she’d felt comfortable around Bruce. Bruce was civilized, suit and tie, well-mannered. Sex with him had been that—sex. No fucking or rutting or wham-bam allowed. No turning into a bitch in heat on her part, not that she’d ever done that—just imagined it. Even more important, no granting Bruce a role in the fantasy she should have never told him about.

Jeez, will you get off it!

Her host stood. “Are you ready to see your room?”

Looking up, it was all she could do not to gape. How tall was he, anyway? And those muscles—what was a resort employee doing with a power-lifter’s physique?

“Of course,” she belatedly replied and planted her legs under her. When he held out his hand, she placed hers in it.

Run! Run before it’s too late!

Startled by the out-of-nowhere warning, she tried to extricate her fingers. However, he held on, albeit not with enough force to frighten her or cut off circulation. “It looks like it could snow,” she babbled and tugged again. “I hope I’ve brought the right clothes.”

“How can you say that? The notice I received didn’t stipulate what kind of attire was recommended. When I called to confirm, I was told that if I needed anything, there’s a clothing boutique.” She glanced down at her hand, or rather what she could see of it. “I don’t mind telling you, I found that a little off-putting. Given the rates I’m sure you get for this place, doesn’t it seem as if you’re fleecing the client if—”

“Clothing won’t be your main concern.”

Massaging her hand with his strong fingers, he granted her a smile that didn’t make it all the way to his eyes. She had the disconcerting thought that he was playing with her. If her impression held up, she’d be sure to let his supervisor know she didn’t appreciate it. Spinning a little make-believe with him in it was one thing. His sensing her single-and-stressed status and taking advantage of things was quite another.

“Think of the Getaway as an escape from reality. Things happen here that don’t anywhere else on Earth.”

“We don’t advertise in the usual media. In fact, starting with our first few months in existence, we’ve discovered that word-of-mouth from satisfied customers has been sufficient.”

“Oh? Then whoever signed me up was either a satisfied customer or someone who—”

Before she could finish, he yanked her toward him and spun her so her back was against his chest. His arm clamped around her waist, sealing her to him. His other hand went to her face, and something pressed against her nose. Gasping, she dug her nails into his forearm, but if he felt them, he gave no indication.

She reached back and up, hoping to claw his face. As she did, she took a breath. Something horrid-smelling seeped into her, and she weakened. “What’s happening?”

“What?” she repeated, her system coming unglued. Still, she threw herself against him, hoping she could knock him off his feet. No such luck. Although she tried not to breathe, she did. When she opened her mouth, more of the awful stench invaded not just her nostrils but her nerves.

Something both hot and cold spread through her. What had been disbelief gave way before the assault to be replaced by a calm and disconnect she lacked the will to question.

Fully awake and aware, albeit uncaring, she slumped in his grip. Her arms sagged and her head fell forward. He removed whatever he’d held over her nose while supporting her dead-and-willing weight. After a moment, she felt her head being lifted by the hair. When the back of her head rested against his chest, he patted her cheek.

“I know what you’re thinking, or at least I have a darn good idea. You can’t quite wrap your mind around this particular reality, and fully expect to wake up at any minute, but this isn’t a dream. Neither am I.”

Who are you? What—

“This inability to speak won’t last long. At the same time, you’ll soon stop feeling as if you’ve been separated from your emotions. You’ll start to be afraid, but you aren’t in danger—at least not what you’ve always comprehended as danger. I’m not going to hurt you. If you believe nothing else, believe that.”

Much as she tried to pick his words apart and make sense of what he was saying, she felt as if she were drifting. He was so darn strong, his voice commanding and comforting at the same time. Maybe if she told him what an intriguing hunk he was, he’d let her in on why this was happening. And once he had, they’d—what?

“That’s better,” he said, his hand now at the side of her neck as if taking her pulse. “Your heart rate’s slowing.” Still supporting her, he slid his hand under the top of her sweater. His fingers closed around a breast.

“Welcome to your new reality. One you’ve wanted for a long time.”

Share what you thought about His Invitation and earn reward points.