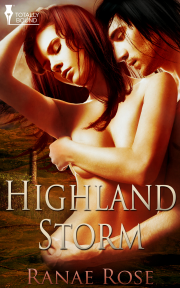 Highland heir Alexander Gordon is the answer to the disgraced Isla Forbes' prayers—but should she redeem herself by killing him to avenge her brother, or let him rescue her by becoming his wife?

A Gordon man ruined Isla Forbes' life. Blamed for her brother's death and desperate for escape from her father's abuse, she journeys to a saint's spring to plead for help. A fierce storm that sweeps across the highlands drives her into the arms of the striking Alexander Gordon, heir of Benstrath and half-brother to her own brother's murderer. It's obvious he's the answer to her prayers…but should she redeem herself by killing him to avenge her brother, or let him save her by loving him?

The air smelt of rain and lightning. Isla drew her cloak further over her head, holding it fast against the wind with a fist beneath her chin. Fat raindrops pelted her face anyway, driven almost sideways by a particularly fierce gust, plastering a few stray strands of her fiery red hair against her fair cheek. Water flew into her moss-green eyes, causing her to blink against the sting. She cursed under her breath as her horse plodded on, its ears laid flat against its skull. She hadn’t expected foul weather. There had been no sign of an impending storm earlier that morning when she’d ridden from home. Sign or no, her skirts clung to her legs, soaked, as she rode onwards across the rain-swept highlands without hope of shelter. Should she turn around and begin the journey home?

No. She was too close, and it might be weeks or even months before she had another chance to abandon her home and chores for half a day. Her father had gone to his brother’s farm to help him with the breaking of a particularly feisty colt, intending to stay at least two days. In preparation, she had doubled her efforts around their modest home and fields over the past couple of days to ensure this trip wouldn’t cause her to fall noticeably behind on her work. Her hands were raw from it—even holding the leather reins stung her fingers. She could only hope no one would come calling and find their cottage empty, or recognise her riding across the countryside and mention it to her father. He would demand an explanation for her dalliance, and what would she tell him? Certainly not the truth. She shoved the thought from her mind and focused instead on the road ahead, which had turned rapidly from a dirt path winding through the heather to a sticky ribbon of mud. She eyed the field to her left and the forest to her right in turn. She hadn’t come far enough yet to want to enter the woods. The heather, however, would make for better footing than the thick mud. She tightened a rein and pressed a leg against her mount’s side, urging him off the road.

The horse—a stout little bay gelding she called Briar—turned his head slightly to the left and lurched suddenly, plummeting beneath Isla. She bobbed in the saddle, caught unawares by his stumble. Briar struggled to right himself, heaving beneath her as an ominously sticky, wet sound came from below. She swung out of the saddle and landed in the mud, in which she found his front left hoof entrenched. It was hard to tell exactly where his leg ended and the earth began, because his coat was naturally the colour of mud, but it was obvious he’d sunk in well past his fetlock. He snorted and pulled, pawing the mud with his free foot. She placed a hand against his damp neck and attempted to calm him, fearing the sound of snapping bone would soon join the noise of sloshing mud and pelting rain to create a symphony of doom.

"Shh..." She stroked Briar’s neck with one hand while she felt her way steadily down his leg with the other.

Briar snorted and gave one last pull just as Isla’s fingertips brushed his soiled knee. His foot came lose with a loud pop and he slid a little in the mud, caught off balance. Something gleamed silver in the churned earth—a horseshoe. Isla groaned, placed a palm flat against Briar’s grime-splattered chest and pushed, urging him backwards, away from the treacherous pool of churned, wet earth that had robbed him of his shoe. He complied, his hooves splashing in the layer of rainwater that glazed the surface of the saturated ground. She pulled him into the heather, patting his neck and eyeing the lost horseshoe with regret. What would her father say? She’d better grab the shoe and tuck it into her saddlebag so she could take it home, toss it into the paddock and pretend it had been lost there.

"Hold still, now, Briar." She relinquished her hold on his reins and stepped back out onto the road.

He stared at her complacently with large, dark eyes, any sense of adventure or mischievousness cowed by the driving rain.

Isla experienced one fleeting moment of shelter from the downpour as she bent to pluck the horseshoe from the road, her hood falling forward to hide her face as she eyed the muddied, upturned earth. And then the rain was back, cold and biting against her cheek as she rose and tucked the shoe into a fold in her cloak. A distant flash of movement in the corner of her eye caught her attention as she slogged forward to reach for Briar’s hanging reins. She turned and squinted against the downpour, barely able to make out a figure approaching on horseback.

Her heart leapt and her mouth went suddenly dry. Who could the rider be? Even from this distance, she could see the rider was so large it had to be a man. He couldn’t be her father—not coming this way, anyway, unless... Unless he’d returned early, found her missing and set out to search for her. She began to shift into a panic as the possibility, unlikely as it was, occurred to her and took root in her mind like a fast-growing weed. She clutched the reins tightly and leaned against Briar’s shoulder, peering from beneath her hood at the approaching horse and rider. When he came close enough for her to recognise, she realised she didn’t know who he was. The momentary relief that followed this revelation was quickly overpowered by a second wave of desperate speculation. Who was he, and why—oh, why—did he have to be riding here and now? His blue and green hunting tartan was woven in a pattern popular in the region, so he probably hailed from nearby. Isla knew she’d ridden far enough from home towards Gordon lands for there to be a strong possibility the stranger was indeed a Gordon man.

She wrung the leather reins, sending jolts of pain from her raw fingertips to her tired wrist. If her father was the worst man she could have met on the road, a Gordon was a close second. Her free hand twitched at her side as she remembered the knife she’d tucked into her boot, a bladed talisman against the danger that was approaching on horseback. She longed to reach for it, to feel its comforting weight against her palm.

Ranae Rose is a bestselling author of over a dozen paranormal, historical and contemporary romances, all of them delightfully steamy.

She lives on the US East Coast with her husband, child, dog, horses and overflowing bookshelves. She spends most of her time letting her very active imagination run wild, penning her next story.

When she's not writing, she can usually be found in the saddle or behind a good book with a cup of tea.

Share what you thought about Highland Storm and earn reward points.