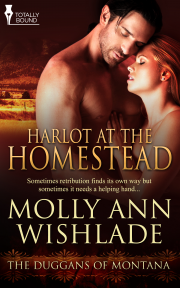 Harlot at the Homestead

Book 1 in the The Duggans of Montana series

Sometimes retribution finds its own way but sometimes it needs a helping hand.

When Catherine Montgomery shows up at Kenan Duggan’s homestead, she expects him to be surprised. She’s been gone two years and she’s devastated to hear that her former fiancé was forced to give her up for dead.

Catherine never stopped thinking about Kenan and hoped that they’d be reunited one day. She has suffered at the hands of another but nothing tortured her as much as being apart from the man she loves. She doubts, however, that Kenan will be able to forgive her when she reveals her secrets.

As Kenan battles his desire for revenge, their mutual desire reawakens like a creek bed in the rain, and soon they are swept up in rediscovering their all-consuming passion.

Retribution often finds its own way in the Wild West and the men to blame for Catherine’s disappearance may well find themselves paying for their crimes in unexpected ways.

That’s if Kenan doesn’t get to them first!

“Kenan!” The cry pierced the night like a flaming arrow. “Help me!”

Kenan jumped to his feet, instantly alert. Just moments ago he’d been slumped in the fireside chair, losing the battle against exhaustion as the rain pattering against the windows and the crackling of the fire had lulled him to sleep. After two months on the cattle trail, he’d been relieved to be back at the Duggan homestead and his mind and body had begun to unwind.

But someone needed help. He grabbed his gun belt from the floor by the chair and fastened it around his waist.

“Kenan!” The anguished cry came again, carried on a voice filled with pain and fear.

He turned to check on his siblings, but the three of them stood wide-eyed and pale behind him like unearthly spectres haunting the dimly lit room.

So who, on earth, had called him?

“Kenan, what was that?” Rosie rushed to his side and took hold of his arm. The alarm in her amber eyes was echoed in his racing heartbeat.

“It sounded like…” He squeezed his twin sister’s hand. “Like…but it can’t be.”

There was a thud from outside as something landed on the wooden porch. Kenan took hold of Rosie’s shoulders and pushed her back towards their two younger brothers.

As he turned and walked towards the door, he removed his gun from its holster. He held it steady in his right hand and placed his left one on the door handle.

Matthew nodded his dark head, his own gun already cocked.

Kenan released the catch and slowly opened the door, letting in the black night, the rain and a dead woman.

“Dear Lord in Heaven!” Rosie appeared at Kenan’s side as he lifted the inanimate woman in his arms and carried her towards the warmth of the fire. She was drenched and ice cold. He laid her on the rag rug in front of the hearth and gazed at her.

“Kenan?” Rosie patted his shoulder and he stared into her bewildered eyes.

Matthew knelt at Kenan’s side and frowned at the sight before him. “How…why…I mean…”

Kenan shook his head. “I have no idea but she’s soaked through and most likely has a fever.” His thudding heart threatened to explode at any moment and as he reached out to smooth back the girl’s sodden red hair, his hands trembled violently.

This didn’t make any sense.

He couldn’t fathom how or why, but Catherine Montgomery, the fiancée he’d grieved for the past two years, had appeared out of the blue at his homestead. His mind raced with unanswered questions but a flicker of hope sparked deep in his gut. He realised that in spite of his uncertainty and regardless of his fears, he was darned glad to see her—the woman he’d thought he would never see again.

“We’d better get her out of these wet things.” Rosie nudged Kenan’s shoulder.

“Yeah…of course.” He leaned over and lifted the unconscious woman from the hearth.

She was as light as lamb’s wool and blossoming warmth seeped through her damp clothing. Everywhere their bodies touched, his skin burned like it had been seared with a white-hot poker. He’d dreamt of holding her in his arms so many times and he’d even made silent promises to whatever deity existed that he’d ask no questions if she could just reappear in his life. But now that she had, Kenan was aware that he had a whole barrel full of questions that couldn’t remain unanswered.

“Take her through to my room,” Rosie whispered.

Kenan walked slowly, careful not to bump Catherine’s feet against the table or the door frames. He looked down into her beautiful pale face and savoured the beauty of her petite freckled nose and her coral rosebud mouth. Suddenly, she opened her eyes wide. She frowned for a moment then her pupils enlarged and Kenan’s heart leapt with a mixture of love and fear. She’d come back from the dead but how and why? And what had happened to her?

Molly Ann Wishlade has always been an avid reader and writer of stories. Her lifetime of reading has taken her from the magical worlds of The Faraway Tree and The Borrowers, to the Greek myths and legends, to Sweet Valley High and Judy Blume's Forever, to Asimov's science fiction, Jane Eyre's torment and Stephen King's masterpieces. More recently she has wandered through the vivid historicals of Philippa Gregory; the bubbly, gritty delights of Adele Parks and the fast paced thrillers of James Patterson. She loves getting lost in a novel and often regrets finishing one as the characters are usually missed like old friends. She regularly indulges her insatiable hunger for romance and passion in the delicious worlds created by romantic novelists and is working on several of her own!

What precious spare time she has is spent with her family (one gorgeous husband and two bright and beautiful children), taking long walks around the beautiful Welsh countryside (although she's still waiting for the rescue greyhound she wants to accompany her), cooking her own secret recipe curries, drinking Earl Grey (in copious amounts) and discovering delicious wines. Oh, and she also loves to ski and can't wait to go again! And buying shoes!

She wants to take readers on the rollercoaster that is life through the creation of her own characters, relationships and worlds.

Share what you thought about Harlot at the Homestead and earn reward points.

These days, homesteading is a popular topic. There are many people looking to become more self-sufficient, and they're working hard to grow their own food. Growing up on a family ranch, we always did a lot of the things that are now "en vogue" like keeping chickens and growing a vegetable garden.

Whenever life throws a spanner in the works and I have to deal with an unexpected event or outcome, I recall the phrase from the movieForrest Gump Life is like a box of chocolates…you never know what you’re gonna get.

Other books in the The Duggans of Montana seriesView Series Page