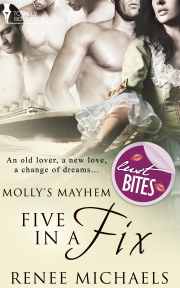 Five In A Fix

Book 3 in the Molly's Mayhem series

An old lover, a new love, a change of dreams… It all promises happiness.

Molly is finally on her way home and one step closer to achieving her ambitions. After they secure her employer’s inheritance, she can take off to seek her fortune. But with a distracting lover and danger lurking in the shadows, how is she expected to focus on getting ahead?

She has never dreamt of marriage. Her aspirations lie elsewhere. Now, with the idea planted in her head by a roguish Irishman, she begins to wonder… And there’s a second man bent on wooing her too.

Molly is the girl for him, and Logan is determined to make her his woman. No murderous villain or rival for her hand is going to prevent him from claiming her. All he has to do is convince Molly that he’s the man for her.

With Molly’s mind fixed on one goal, her heart begins yearning for another. The mayhem, which is now commonplace in Molly’s life, continues.

The ocean liner bucked, creaked and shuddered as it rode the mid-Atlantic’s roiling waves. In Molly O’Dowd’s opinion, the tail end of winter was not the time to make the crossing from Europe to the colonies, as the English referred to her homeland. The water possessed the same bad-tempered grey hue as the sky. A distant rumble presaged an approaching storm, warning them that the ride was going to get rougher.

Molly vowed, if she survived this voyage, never to step foot on a ship again.

It was almost enough to make her give up adventuring and instead marry the man who had offered his name then produce a bunch of children she’d been told was all a woman of her social standing could hope for. She let out a dismissive snort. Marriage? Not just yet. Maybe never. She had a yearning for something more and she would get it or her name wasn’t Molly O’Dowd.

The vessel lurched, and she gripped the ice-rimed rail as though her life depended on it—and it did. If she didn’t hold fast, she might get washed overboard, but she couldn’t bear to go below. She inhaled and coughed, the frigid air chilling her lungs. It was better than the alternative. The belly-curdling stench of seasickness permeated the entire ship from grand staterooms to steerage.

A gust as cold as the proverbial witch’s tit whipped up her skirts her and nipped at her nether regions. Molly was so chilled she lamented that her pussy would never thaw.

She issued a startled yelp when she was hauled back against a long, leanly muscled body and enveloped in the folds of a great coat. Cocooned in the heat emanated by her rescuer, a grateful moan slipped from her lips.

Logan, her lover and would-be suitor, braced his legs apart and wrapped his arms around her. She was glad he’d decided to make the crossing with them. He was handy in an emergency, he was quick with his fists and he’d used the blade he had tucked in his boot to stave off a cutpurse’s attack while they waited in Le Havre to board the Cunard packet. His actions made her realise how little she really knew about him. They hadn’t spoken much since they’d boarded the ship. Since she’d been attacked in her mistress’ bedchamber, he’d assumed a subdued menace she’d never noticed before. Yet, he treated her and the young countess with a gentle courtliness that belied his potential for violence.

“It’s not safe for you to be out here alone.”

The vessel tilted to one side, and Logan grabbed her hips to steady her.

His body emanated heat like a furnace, and she wiggled to warm her frozen rear. A bulge grew in his groin area, pressing boldly against her plump bum.

“They wouldn’t be if you’d marry me, and I could do so much more.” Logan’s voice thickened, his accent growing more pronounced.

Molly turned within the circle of his arms and grinned up at him. His skin had lost its greenish tinge.

“And here, I had begun to think you’d turned shy on me. You’ve been avoiding me.”

He laughed, the sound tinged with sadness and regret. “Ah, Molly me love, you missed me as I’d hoped. You’re a tempting morsel, but heaves and dips had me worshipping the chamber pot. I prayed for a quick death.” He frowned and touched her cheek with icy fingertips. “Look at my hands, Molly. They’re steady now. Ready to woo you as is proper so say you’ll be my wife.”

Oh, she’d looked all right—at his hands, his feet, and the snug drape of his pants over his thighs. His crotch. She’d worried and waited for him to recover. The dratted man had refused her attempts to nurse him. He’d shoved her out of his cabin and slammed the door in her face. She hadn’t seen him for four days.

Who doesn't love some rowdy sex now and then, especially when the players are all as yummy as Molly & Co.! This series is so sexy and fun that I couldn't wait to pick up this latest installment of Moll...

Share what you thought about Five In A Fix and earn reward points.

When I started writing I was told it would be best to pick a genre and stick to that particular category. The reason being that readers tend to pick a certain kind of book and stick to it. I rejected this idea. I read a lot, probably too much, and I read a wide variety of books.  That being said, I don’t see how I could pick just one type of story to read or write.  I’ve written, fantasy, paranormal, historical, and interracial. I hope to scribble a romantic suspense one day. I never pen a novel thinking how well the story is going to sell. My aim is to spin a tale peppered with a little sex, well more than a little—a dash of adventure and some humour. I hope that will be good enough to engage anyone who reads my work and that they’ll want to see how my story unfolds.