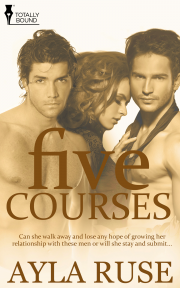 Paying the price for breaking the rules has never been so delicious.

Trent and Mike rule their kitchen like they do their subs—with firm command and guiding strokes. Only they haven't enjoyed a sub in months, not since Melissa moved in with them. She's getting over a broken heart and seems so fragile that they don't want to scare her away.

When the men come home from their club early one night, they catch her breaking just about every rule they have in their kitchen. Now the gloves are off.

Melissa, trembling under their gaze, is given ten seconds to decide her fate—she can walk away and lose any hope of growing her relationship with these men, or she can stay and submit to their creative punishment for her misdeeds…

Publisher's Note This story has been previously released as part of the Whip It Up anthology by Totally Bound Publishing.

Mike sank onto the couch with an audible sigh.

“Nothing catching your eye tonight, either?” Trent asked.

Mike turned his head and studied his best friend and business partner. He didn’t answer. He didn’t have to. They both suffered from the same problem. Wanting a woman they couldn’t have.

The music pumped loud through their favourite club, the lights dim except for the stations. Mike crossed his arms over his chest and watched one sub being spanked, another being flogged and still another kneeling before her Dom.

“This sucks,” Trent commented without heat. “I’ve never had it this bad for a woman. I look around and all I see is Melissa.”

Mike nodded his head in agreement. “I don’t know whether to thank you or punch you for talking me into having her rent the middle loft.”

“I didn’t have to talk you into shit, Mike. She had nowhere to go. You would have offered her the loft by the end of that night if I hadn’t mentioned it first.”

Mike grunted at the truth in Trent’s words. That impulsive decision to give temporary aid to a woman in need had led to their four-storey building being infused with the sights, sounds and scents of a woman they couldn’t touch. Amend that—wouldn’t touch. In the months she’d been living with them, she’d shown herself to be trustworthy, fun, spontaneous, dependable and of course, sexy as hell. Even when she raided the industrial-size refrigerator in the middle of the night sporting that ratty-ass robe of hers that covered every inch of skin, all he wanted to do was strip it off and feast on her delectable body.

Mike set his hands on his thighs. He liked control. Savoured it. Commanded it. But the constant thoughts of the woman out of their reach made him antsy, which irritated him to no end.

Trent interrupted Mike’s thoughts. “She seemed happy to see us go tonight. Makes me wonder what she’s up to?”

Share what you thought about Five Courses and earn reward points.

What made you fall in love with historical romance so young?

I have always been an avid reader and in my pre-teens, I loved to read a popular historical romance series for young girls. I think the series was called Sunfire, where each title was the name of the heroine. My future sister-in-law, seeing what held my interest, passed along a couple of her “adult” historical romances. With regret, I don’t remember the title of the first one I read, but I do know that I instantly became hooked.