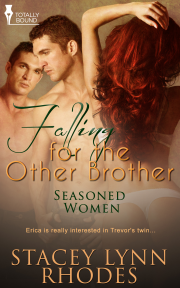 Falling For the Other Brother

Book 2 in the Seasoned Women series

Erica had been planning to break it off with Trevor—he was really too young for her, after all. But it's hard to use that excuse when the man she's really interested in is Trevor's twin, Colin.

Her biological clock ticking, a chance conversation leads Erica to Trevor, a former sperm donor, who helps convince her to move ahead with her plans. But he adamantly refuses to be her donor, in fact he's pulled all his past donations, for a reason he won't discuss. Their subsequent relationship, while hot, just drives home the different goals the two have.

When Colin returns from overseas, his problem with intimacy still looming large, he never dreamt he would meet his ideal partner in Erica. Only two things stand in their way—her relationship with his brother, and the fact she wants children…the one thing he can no longer provide.

Reader Advisory: This book is part of a series because of theme only. It is a fully stand-alone story.

Publisher's Note: This book was previously released as a short story. It has been considerably expanded and revised.

A cool waft of air on her shower-warm skin was the only warning Erica received before large hands cupped her bare shoulders. Once she got over her initial surprise, a smile curved her lips. The familiar touch meant that Trevor’s last-minute flight home must have been on time. She was pulled back flush against a hard male body.

Or maybe she should say, a hardening male body.

She gave a little wiggle, bringing their bodies in closer alignment as her favourite rain-shower setting softly pelted them from above, with two slightly more forceful jets massaging from each side.

A muscular and extremely tanned arm reached past her to pluck the hand-held shower head from its holder.

“Picked up a little sun?” she joked. “I see you’ve been working hard.”

Trevor’s deep responding chuckle reverberated in her ear. “I always make time for play. In the Caribbean especially. And the shoot was on the beach.”

As a popular and successful fitness model, Trevor did a lot of cover shoots and spreads for various magazines, as well as demonstrations for equipment. It was one of these demo jobs, evidently staged on a tropical beach, that he had just returned from.

She felt his shrug. He never complained about the less romantic aspects of his job, but was just happy to be doing what he did. No false modesty or dissembling, he enjoyed using his fit body to make a living.

“It was fine. Not as hot as you might think, just sunny.”

Erica turned within his embrace and gave him a lingering welcome-back kiss. She was torn—glad to see him home early but dreading the conversation she had finally psyched herself up to initiate.

But not yet. Like Scarlett, she’d think about that tomorrow.

Firmly turning her mind from anything remotely cerebral, she instead lost herself in the hedonistic sensation of turning her pleasure over to the sexiest man she’d ever known. She knew the moment he sensed her acquiescence. The hands cruising over her slick back slid purposefully down to cup her buttocks. A satisfied hum in his throat was barely audible but somehow captured her focus.

Wanting to cause that sound again, she mirrored the movement of his hands. She could barely make a dent in his muscular ass, even when she gave a hard squeeze. Squeaking as he playfully returned the favour, the teasing evolved into a wet, sensuous game of follow-the-leader that soon had her panting with desire.

Erica was jarred from her reverie as Trevor abruptly ended the exploration and guided her to sit upon the ledge at the back of the walk-in shower. She jolted as her heated body touched the cool tile.

“Shh. You’ll see,” Trevor cautioned, smirking as he adjusting the setting on the hand-held shower head from rain to a pulsing jet.

Oh my God. Erica moaned as he directed the spray across her sensitive peaks, twisting as he unrelentingly followed her movements with the almost torturous attention. She breathed a sigh of relief as he moved on, leaving her nipples aching in his wake, and continued upwards to her neck.

This time, her groan was one of utter bliss as she dropped her head forward to accommodate the impromptu massage. “Trev, that’s perfect.”

“Mmm,” he agreed, using the stream to methodically tenderize her chronically tense shoulders into something resembling melty goo.

Just when she’d almost forgotten the sexual tension, he ratcheted it back up by trailing the jet swiftly down her body, glancing across the full slope of her breasts in an almost offhand manner.

He reached down with his free hand to encourage her partially separated thighs farther apart.

Her head snapped up. “Trev…”

She reluctantly obeyed, also allowing her legs to part wantonly as the firm touch of the spray—feeling much like a questing finger—worked its way lower still. Target reached, the pulse hit squarely on her clit, almost sending her flying off the seat. Trevor moved the water back and forth, strumming across her rapidly engorging nub in a random pattern that left her gasping for air.

She hadn’t realised she’d opened them, hadn’t been able to focus on anything, but willingly followed the directive without delay as the tension coiling within her zoomed past anything bearable.

Tipping over the edge in a supernova of pleasure, she arched and writhed, coming as hard as she could ever remember as colours flew behind her lids. This time, when she squirmed away from the spray, it immediately turned to a gentle, caressing shower.

She sensed Trevor replacing the showerhead then gave herself over to his strength as he gathered her still uncoordinated form to his, his erection pressing unabated against her hip. The water ceased and she finally opened her eyes to meet his heated chocolate gaze.

“Wow,” she breathed, still trying to get her heart rate under control. The exhalation ended on a slight laugh. “I’m so glad I gave you a key.”

“Oh, you can still talk?” he parried. “I must not’ve done my job.” He walked her around the corner of the open shower onto the soft bathmat and grabbed a couple of towels. After drying himself in his normal slap-dash manner, he took his time drying her off, then swept her off her feet and carried her into the bedroom.

Share what you thought about Falling For the Other Brother and earn reward points.