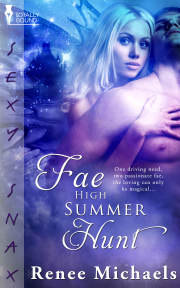 One driving need, two passionate fae, the loving can only be magical.

Banished by Titania, Queen of the Fairies, sensual and wilful, Naeme longs to bask in the heat only a lover with fae blood can generate. With the High Summer Hunt about to begin, all she has to do is capture the interest of a member of the royal guard to re-enter the queen's gilded, decadent court.

Baylor intends to claim Naeme. But he is the captain of the queen's guard and the last man she would take to her bed. Titania is a jealous sovereign and given the reason for Naeme's exile, he knows he has a battle on his hands in order to coax Naeme to his arms.

But the forbidden is so tempting, and there is nothing like making love after war.

Naeme bent over the glassy surface of the pond and studied her reflection. She’d dropped the blurring she’d used to lessen her beauty. For the first time in a year, she stared at her true self. Her Fae form.

She’d gathered moonbeams and infused her skin and hair with them so she glowed with an unearthly silvery luminosity. Her almond-shaped eyes, the pale translucent green of a new leaf, sparked with excitement. Her oval face and lush pink mouth shimmered with Fae glamour. Vanity aside, she’d never looked better.

She’d chosen her gown with care, fabricating it from the same material as iridescent dragonfly wings. When she moved, it rippled to show the full spectrum of colours. It was constructed so the collar stood up to frame her face, but with a slit that cut down between her breasts to end just above her plump mons. It’d offer enticing glimpses of the silvery dusting of hair protecting her core.

Naeme trailed her fingertips between the exposed inner curves of her breasts and watched with satisfaction as her nipples popped up like pebbles.

The relentless pounding of hoof beats approached and a grey mist spread across the forest like hoar frost. Titania’s guards were on the hunt. She’d capture a guardsman’s attention and hope he’d be worthy to service her needs.

Unfurling her wings, she rose and hovered above the small clearing. She shone like a bright beacon suspended in the air with Fae allure dusting the air around her.

A horseman passed through the trees, bringing with him the innate virility and magical appeal a male Fae possessed. Naeme’s body sang with the sweet symphony of need.

Her mouth dropped open, and her wings froze in mid-motion. Naeme started to plummet to the ground, but she righted herself before she landed.

Baylor… Austere, taciturn Baylor—the captain of the Queen’s guard who hadn’t partaken of the Hunt in two centuries.

She didn’t want him. It’d be torturous to be bound to him for a year. He was Titania’s man. He wore her colours, a deep rich crimson piped with gold.

Baylor slid off his mount, and her eyes were drawn to the intricate codpiece he wore. She’d heard the laughing titters bandied about that it didn’t need any stuffing to fill it out.

He’d secured his waist-length, midnight-black hair at the back of his neck. This bared the strong bones in his face, the firm jaw and chiselled lips. However, his eyes were what disturbed her most.

His gentian-blue eyes were heated with a mystifying anticipation, tinged with a possessive inflexibility. Baylor had never shown any marked interest in her before when they’d encountered each other in passing at court. Naeme knew when a man wanted her. She read desire like a second language. His desire spoke in volumes with a hunger that was both primal and lustful. Perplexed, she frowned at him.

The urge to flee clamoured over Naeme’s senses, but the responsive flesh between her thighs throbbed.

“You made it so easy for me. I claim you.” The very sound of his voice, melodic with a deep bass of thunder, held Naeme in place.

With a flutter of her wings, Naeme rose into the air to put height and distance between them. Wariness had her poised for a fight as she untangled herself from the thrall of his voice. “What are you blabbering about? I don’t think your lady would like you consorting with the likes of me.”

“I used the Hunt as a way to return you to court. Titania knows I have a need. She has granted me leave to fulfil my wish.”

“A need?” She tilted her head. Suspicious of his sudden verboseness, she surreptitiously checked the shadows.

“My burgeoning will coincides with yours come the spring.”

Her pride pricked, she said coolly, “A vessel. You seek a vessel to bear a babe.” She couldn’t help but be astounded by the sheer arrogance of the man. Masking her growing rage with amusement, she laughed. The sound tinkled through the air with a bell-like clarity. “At the moment of the forming, we’d have to both want what we’d create, which I won’t even consider for many more changes of the seasons.” She sent him a mocking smile. “I doubt very much that once-in-a-blue-moon event would occur.”

Share what you thought about Fae High Summer Hunt and earn reward points.