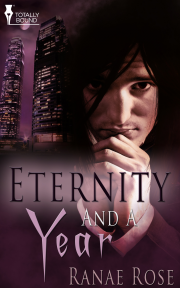 Eternity and a Year

Having already lost her fiancé once, Carrie is determined when he finds her again to see that their love lasts for the eternity that he promised her — even if he is a vampire, and being hunted by another who's already proven that she'll kill for him.

Carrie never expected her fiancé Brendan to disappear without a trace three months before their wedding, and she certainly never guessed that he would return a year later as a vampire.

A torrid romance between a bloodthirsty vamp and his still human bride-to-be is bound to present challenges, but Carrie and Brendan both feel that being apart any longer is out of the question.

There's only one major problem: the evil seductress of a vampiress who robbed Brendan of his humanity and has returned on the anniversary of her crime to take his life in her quest for more power.

Carrie clutched the lapels of her jacket tightly against the chill of the early autumn evening. It was unseasonably cool for October in Charlotte, North Carolina, as if the weather had decided to match the climate of her emotions. She walked slowly as she covered the distance between the small boutique where she worked and her apartment. There was no one waiting for her at home, no reason to hurry.

“Huhh!” she gasped sharply, the fabric of her jacket straining across her bust at the sudden expansion of her chest. She had seen it—there! A large shadow, darker than the nine o’ clock streets, darting quickly out of sight. Her heart hammered, hard and fast. A mugger. A rapist. A murderer. Each possible explanation her mind conjured up was worse than the last, but none of them—terrible as they were—prepared her for the shock of the truth.

“No.” The network of neurons and synapses in her brain might as well have snapped and been sparking like broken power lines for all the good her powers of reasoning were doing her. Her heart stepped up in their place and assumed control. Yes, it cried to her, yes, God yes!

“Brendan,” she whispered, as the shadow revealed himself.

Carrie trembled and fell, swallowed by the blackness and quiet of unconsciousness before her body could even hit the sidewalk.

The place where Carrie awoke was a little less dark and quiet than the nothingness that had filled her mind when she’d fainted, but not much. The ceiling above her was rough, wooden, its rafters barely visible in the dimness. The hardness beneath her indicated the floor was made from a similar material. She pressed a palm down by her hip, where a folded blanket protected her from the worst of the cold and stiffness that came from lying on an unheated, hardwood floor.

Where am I? she wondered desperately. The only source of illumination was moonlight, which drifted in through a jagged hole, about two feet across and two feet high, in the brick wall. That shadow... So it was a rapist! Why else would she be lying on her back on a blanket in an old, abandoned building?

She took a quick inventory of her clothing and found it was all still intact. And her body felt as closed and unvisited as it had on any other given day of the past year. Where was she, then, and why?

A face appeared above her, and the rest of the street-side events flooded back in a rush of wild emotion. “Brendan!” Carrie gasped.

It was really him, it had to be. She would have recognised the slightly coppery gleam in his dark locks anywhere—she had never seen hair quite like his. It had grown, though, so it brushed his shoulders. A year ago it had been cropped quite short. She had always wanted him to let it grow out. She’d even begged him once. And his eyes—there was no mistaking the shape or the fringe of dark lashes. But there was something off about the colour. Maybe it was just the dim lighting, but they appeared almost red in hue. His face, however, was just as it had always been, if a bit paler. She could have traced its every line and contour with her eyes closed and known who he was—and the same went for his body, which bulged beneath dark, simple clothing with a strength she had once known so well.

His breath caressed her face, stirring a few stray wisps of her hair. His voice was thick with emotion, and his mouth, still full and soft, quivered somewhere between smiling and frowning.

“Am I dreaming?” Carrie reached out to brush the backs of her fingers against his cheek. His skin was surprisingly cool to the touch. Maybe it was just a dream.

The dust and coolness that surrounded her were real enough, and when she glanced out of the hole in the wall she could see the moon, almost full and mottled with blue craters. The only surreal thing about the situation was Brendan. “You’re not dead?” she asked, her voice cracking slightly.

Brendan hesitated for a moment before answering. “No,” he finally said, “I’m not dead.”

“Then where the hell have you been?” she demanded. She felt like an old glass bottle that was riddled with cracks, full to the point of bursting and in danger of exploding into a puddle of uncontained emotion at any second.

Brendan licked his lips—something he’d always done when he was nervous. A flash of tooth gleamed white in the moonlight for a moment. “I’ve been here. Right here.”

Carrie shook her head in confusion, and her nutmeg-coloured locks stirred on the blanket laid out beneath them. “What’s that supposed to mean?”

Brendan paused and frowned as if deciding how to answer.

Carrie drew her hand away from his face in a flash of anger. “Well, if you don’t have an answer for that,” she said, “at least tell me why the hell you left in the first place.” Hot tears pricked her eyes, threatening to spill over.

A tear slipped from Carrie’s eye and streamed down her cheek. Brendan reached out and wiped it away with a cool thumb. “I never meant to leave you, Carrie. I had to, and I…I’ve come back. I came back as soon as it was safe.”

Ranae Rose is a bestselling author of over a dozen paranormal, historical and contemporary romances, all of them delightfully steamy.

She lives on the US East Coast with her husband, child, dog, horses and overflowing bookshelves. She spends most of her time letting her very active imagination run wild, penning her next story.

When she's not writing, she can usually be found in the saddle or behind a good book with a cup of tea.

Share what you thought about Eternity and a Year and earn reward points.