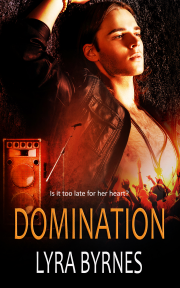 A good-girl journalist falls under the spell of the most dangerous man in rock and roll. Amid the madness, she tries to keep her head, but is it too late for her heart?

Good girl Josie Arrington knows what it takes to be the only female journalist at a renowned music magazine—work hard and take every assignment, even if it means knocking on the dressing room door of Domination singer Bram Hunter, an intensely private, devastatingly sexy rock god. But when Bram mistakes her for a groupie with expertise in feisty submission, Josie realizes she still has a lot to learn.

Over the course of a scorching two-week tour with the band, Josie is pulled into Bram’s world, and his heart. As a writer, Josie can’t help trying to make sense of her sinful new secrets through a private blog. After all, no one will ever see it, right?

Josie dug through her messenger bag outside the dingy metal door, the roar of the crowd still echoing through the shabby backstage hallway. Tape recorder, notebook, pen—all present and accounted for. Now where was that slip of paper that had the door number on it? It was thirteen, for sure. Unless it was three.

She had already missed the show, having been asleep like a normal person at midnight when the call came from her editor. The hard-rock critic’s wife was having a baby. Could Josie get to City of Angels Arena on the double to interview the bassist for the English heavy-metal band Domination? Bring a tape recorder, he’d added.

That made her roll her eyes, although Artie had meant it kindly. Of course, she recorded all her interviews. You didn’t get to be the only female journalist at Rock Star magazine by winging it. You got there by working harder than the guys and jumping at the chance to do a story, any story. Heavy metal wasn’t her beat but she needed to prove herself willing and reliable, especially now that the very existence of Rock Star was in jeopardy. She had pulled her hair back into a ponytail, slipped on a pair of flats she hoped matched and arrived at the venue in time to hear only one song, if a song it could be called. Violation. The singer had introduced it as one written that very day. The music was dark and loud and horrible, but she could pick out lyrics—“something something All must pay!” the singer bellowed. It did not offer the easy pleasures of dance-pop but had a rough, compelling power.

And now here she was backstage, catching her breath outside dressing room number thirteen. She had little doubt this Domination bassist would be like the others—sexy, arrogant, dumb as a rock. She chewed the already frayed end of her pen and lifted her knuckles to knock.

The door swung open and her jaw dropped. Josie forgot to lower her hand. He was more than six feet tall, broad-shouldered but lean as a whippet, wearing nothing but a pair of skintight leather pants low on his hips. Way low. She forgot how to breathe. One more moment staring at the flat abs and the slanting cuts inside each hip bone pointing down like arrows and she would forget her own name.

“Are you the one I’m waiting for?” His voice was a soothing rumble with a touch of threat.

Josie’s throat closed up. Sweaty, dark hair framed his face, but what a face. Killer cheekbones, intense midnight-blue eyes with a suggestion of crow’s feet in the corners and ringed by black lashes. Her reporter’s eye kicked in automatically. Guyliner? No. He was one of the lucky black-haired, blue-eyed types with a weirdly piercing stare. A half-empty bottle of Jack Daniel’s dangled from one hand.

Sexy—check. As for the rest, she’d have to see, although in her experience there was no such thing as a smart bass player.

“Josie Arrington.” She stuck out her hand. “Rock—”

“Let’s not fuss with introductions, love. You’ve got a job to do.”

She padded into the dressing room, empty but for a couple of plastic chairs and a table holding a vegetable platter and a huge pitcher filled with something brownish. Where were the groupies, the hangers-on, the usual backstage mess of wilting flowers, overflowing ashtrays, kicked-off shoes and congealing Chinese food?

Josie recovered enough composure to lift her head and meet his eyes. She had grown used to the sexism and paternalism of her work, not only in journalism but also in the music industry.

“Well, surprise,” she said, gratified that her voice didn’t shake. She reached into her messenger bag. “Just let me get the equipment…”

“No need for that either. I’ve got it sorted. So my walking calculator of a manager sent you.” He shook his head and swigged from the bottle. “He knows what I like. Dark hair, tiny waist, lovely eyes. And the getup—that’s extraordinary, that. Who’s the bird with the specs in Scooby-Doo?”

“Velma.” Self-consciously she pushed up the bridge of her glasses. No one had ever called her eyes lovely. In truth, they were smallish and gray. It was her wide mouth the guys at work whispered about, adding various offensive gestures. DSLs. Dick-sucking lips.

“Velma, right. With Daphne’s body. You’re a wet dream come true, sweetheart.” He began to unlace the crotch of his leather pants. “On your knees.”

He looked down into her eyes, not kindly. “Knees, slut. I don’t have all night.”

“I’m not a slut,” she snapped. And I’m not getting on my knees for you, even if I was fantasizing about that exact thing just a minute ago.

“Ah, you want to fight back.” He put a hand on the top of her head and pushed. “Normally I like that but the bus to Salt Lake leaves in an hour.”

Panic kicked in. This is unprofessional. It’s not you. Explain the situation, have a laugh, get the interview and go home. But somehow she found herself kneeling in front of him, her bag sprawled on the floor.

He kneaded the crotch of his pants, his bulging erection straining against the leather. “You’re going to suck my cock until I see stars. And if you don’t suck it good, sweetheart, you’ll be punished. Time enough for that.”

“I don’t…” But her body did want to. Very much. Even as her brain protested like crazy, her panties were wet and her nipples were making a humiliating spectacle of themselves.

“That’s good,” he sighed, rubbing a hand against his cock. “Tell me what a good girl you are. That will make it so much hotter when I violate your mouth.”

Something pinged in her head—the song Violation. Against her will, Josie giggled.

“The fuck you laughing at?” he snapped.

“I just realized what the lyrics were of the song you wrote today. ‘All may park / All must pay’,” she said, stifling another laugh. “‘Violation’. That’s written on the sticker on all the local parking meters.”

That brutal, dark song had been nothing but a joke. Maybe this guy wasn’t so dumb after all.

His hand stilled, although the bulge remained. He gazed down at her, the faraway look gone. His eyes seemed to penetrate hers.

Lyra Byrnes has been a writer her whole life, which is her way of living entirely in a fantasy world. After years in Los Angeles, Washington, D.C., and New Orleans, she made herself at home in Indianapolis by decorating her house to look like an exotic 19th-century bordello. In between concocting scintillating scenarios, she can be found playing accordion, reading, haunting various jazz clubs or in the basement making soap.

I really enjoyed this story... Absolutely up my rock star romance alley, I found myself engaged and enjoying the story play out.

Share what you thought about Domination and earn reward points.