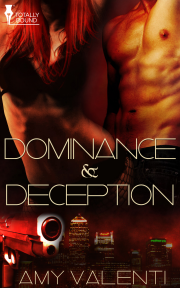 To catch a killer, you have to think a little kinky…

Submission is a dangerous game… Faye Tate is a police forensic scientist, a switch, and secretly in love with a police detective.

Detective Zach Pierce has made many enemies, but his attraction to Faye is too strong to be denied. Can Pierce protect his submissive from those who seek to use her against him, or will her devotion to her Dom cost Faye her life?

Reader Advisory: This book alludes to scenes of F/F intimacy. It also has scenes of ménage à trois.

“What do we have, Layton?” Draining my coffee cup and throwing it into the trash, I looked over at the rookie cop, who was frowning at something on his computer screen.

“Surveillance camera footage from outside the club—the smoking area.” Layton beckoned us over to his desk, and Beaumont and Santoro rose from their chairs to join us in front of the screen.

“There’s our victim, Samuel Leigh,” Beaumont pointed out, gesturing to a figure leaning against the wall, smoking a cigarette.

“There’s a seriously hot chick,” Santoro added, tilting his head to the side as if that would enable him to get a three hundred and sixty degree view.

Wait. I know that face… I scowled at the screen, recognition clicking into place in my mind.

“And there’s Santoro’s hot chick picking Sam Leigh’s pocket.” Layton glanced over at me. “We can get Faye to clean up the image, get a possible ID?”

“I already know her ID.” That got the team’s attention, and they remained silent, waiting for more. I gave them the bare minimum. “Laura Morgan.”

In my peripheral vision, I was dimly aware of someone stopping dead in their tracks, then changing course to approach. Glancing over, I recognised Faye Tate, one of our forensic specialists. She was the most efficient and the most beautiful, though I’d never breached the precinct’s protocol in order to ask her out.

I was gonna have my hands full enough with the woman who’d shown up in my case’s security footage.

“You know her, boss?” Layton asked.

“Uh-huh…” I stared at the image of the tall brunette, remembering times past and wondering exactly what else she’d been hiding from me back then.

“Let me guess,” Santoro said. “Gotta be an ex-girlfriend.”

“Yup.” They were gonna find out anyway.

Might as well get the revelation over with so they can focus on the case, rather than my romantic connection to Laura.

“Layton, pull me up her phone number—I don’t have it on me.”

As Layton obediently began to tap information into his computer, an interruption came from an unexpected quarter. “Cancel that order, Layton. I have her on speed-dial.”

Now Faye had my attention. She leaned against Santoro’s desk, toying with her cell phone and avoiding my gaze, and my mind came up with an idea I hoped like hell wasn’t true.

Santoro beat me to the question. “How do you have Pierce’s ex’s number, Faye?”

She shrugged. “If you have the security tape of the dance floor, you’ll see.”

Layton switched to another tape, which showed the bar area and part of the dance floor. I transferred my suspicious glare from Faye to the screen and, in silence, we all watched Laura enter the picture, tucking something into her purse before grabbing the arm of a familiar, red-headed figure.

While her image on-screen turned with a smile and hugged Laura, Faye stepped away from the team, hitting speed-dial and raising the phone to her ear. Quietly, she spoke to Laura, her voice a murmur I couldn’t quite make out.

“Ahh.” Empathetic as always, Erica Beaumont was the first to catch on, and she shot a sidelong glance at me, which I chose to ignore. Before my eyes, Laura and Faye headed onto the dance floor, beginning to move together in a dance that began as flirtatious, then became teasing, then overtly sensual.

I hardly needed to look over at Santoro and Layton to know they were both acting as though Christmas had come early. If it wasn’t for the fact I knew both of the women involved, I’d probably have found the wonderstruck expressions on my male cops’ faces amusing.

The whole team knew Faye was bisexual—when we’d all gone for drinks on Santoro’s birthday last year, she’d brought a female date. I didn’t get how Santoro and Layton could react exactly the same way today as they had then, but I had bigger things to worry about.

Faye ended the call just as the tape showed her pulling Laura into an almost possessive kiss. With an impatient growl, I rounded on her. “Stairwell, Faye. Now.”

She hesitated, then nodded. Without waiting for her to move, I took off at a stride, trying to quell the conflicting emotions demanding my attention without identifying any of them.

Behind me, Faye plucked the remote from Santoro’s hand and gave it to Beaumont with a pleading smile. “Do me a favour? Analyse the footage, but don’t let them—”

“Over analyse? Don’t worry, Faye.” I glanced back to watch Beaumont give her a knowing nod. Before anyone could begin to bombard her with questions, Faye took a deep breath and walked towards me.

We waited in silence for the stairwell door to close behind us, then I stepped forward, invading her personal space to scowl down at her. “You know she was my ex when you started dating?”

“We met the night you two split up,” Faye said, scuffing one boot against the concrete floor. “Laura was crying into her drink, and I asked her what was wrong. She told me she’d split up with someone, and I offered her a sympathetic ear, but it was nearly an hour before I figured out it was you, Zach, I swear.”

Exasperated, I verbally pushed her. “But you started a relationship with her anyway.”

“Why not?” Her voice was slightly rebellious. “You didn’t want her anymore. And don’t tell me you’ve never hit on a girl who’s on the rebound, just because she’s too pretty to be hurting alone?”

Faye and Zach have unknowingly been attracted to each other for a long time now. The erotica in this was scorching, and the storyline was engrossing. Amy Valenti did a great job of making Faye strong and...

This is a page turner right from the start. The main character development is pretty good and you can see there is potential to turn it into a series by providing the officers their own book.

Share what you thought about Dominance and Deception and earn reward points.

Do you have any suggestions/tips for aspiring writers and authors you’d like to share?
Read a lot, write a lot, do things that inspire you. If you really want it badly enough, you’ll find the time to sit down and write. Plan if it feels right for you, but don’t force it if it doesn’t work for you. You should know your ending in advance, though.