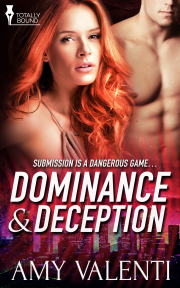 Submission is a dangerous game…

The one question you never expect your hot, Dominant co-worker to ask: “Faye, are you dating my ex-submissive?”

Great. Now Detective Zach Pierce will think I’m a Domme and a lesbian. I’m actually a bisexual switch who’s been dying to kneel at his feet for years. And the reason he’s asking this question? My casual sub has been pulled into the interrogation room at work and is showing every sign of being a duplicitous, possibly murderous bitch.

Then again, if she’s had a hidden agenda this whole time, I’m taking my collar back—and that means I’m single. As far as I know, so is Zach.

With the embarrassing secrets our shared ex is revealing about me to him, this could be the start of a very interesting relationship…or the ruination of a treasured friendship.

Publisher's Note: This book was previously released by Totally Bound under the same title. It has been expanded, revised and re-edited for re-release.

Every time I came up to the squad room, it was harder to focus on what I was actually there to do. There were six teams that worked out of this particular open-plan office, but one man turned my head every time.

Lately, it was as if my brain and my hormones had forgotten years of comfortable friendship with Detective Zachary Pierce. He’d been here when I’d started working for the precinct’s forensic department, and I’d always been able to keep my crush on him safely tucked away during working hours. But ever since my current submissive had confirmed what I’d always suspected about him, my switch side had swung to the submissive every time I was in the room with him.

I cast a glance over at Pierce while I was waiting for Detective White to scan through the report I’d brought up for him. He was frowning at one of the junior detectives on his team as she presumably outlined her findings on their current case. Pierce had always been the prickly type on the outside, but on the few and far between occasions when he let himself relax, his gentle side warmed my heart. And lately, it made me think of what he might be like after a scene, administering aftercare to a lucky submissive.

There I went again. Daydreaming about what I couldn’t have—as though I wasn’t in a casual D/s relationship already. Still, I was a Domme there, and my unfulfilled submissive self yearned for Pierce’s brusque orders and rare smiles.

Turning my attention back to Detective White just in time for his question, I gave him clarification on a few forensic details. He thanked and dismissed me, and I was free to go back down to the forensics lab where I spent most of my working day.

I couldn’t help but take the long route past Pierce’s team’s section of the squad room, though. I was friendly with his team, so it wasn’t that much of a stretch that I’d stop by to say hi.

I slowed my pace as Pierce’s voice reached me. “What do we have, Layton?” He drained his coffee cup and threw it in the trash, and I knew it wouldn’t be long before he took a break to go out and get a fresh coffee. Like most of the precinct, Pierce could never do without caffeine for long.

Layton, the rookie of the team, was still green but gaining confidence by the day, especially when he was dealing with technology. I wasn’t surprised to hear him say, “Surveillance camera footage from outside the club. The smoking area.”

He beckoned, turning his monitor screen so they’d be able to see better, and as the other three team members gathered around, I drew closer as well, curious to see what they’d found. I’d been working on the forensic evidence for a different case all day, so I had no idea what their newest one involved.

“There’s our victim, Samuel Leigh,” Beaumont pointed out, gesturing to a figure leaning against the wall in the video, smoking a cigarette.

“There’s a seriously hot chick,” Santoro added, tilting his head to the side as if that would enable him to get a three hundred and sixty degree view.

Wait. I know that face… Recognition kicked me in the gut. This was footage of the club Laura and I had been to last night—she was Santoro’s ‘hot chick’.

If the victim of this homicide had been murdered while we were at the club, no one had found the body until after we’d left. Either that, or the management had been extremely discreet about it.

I opened my mouth to interrupt them, but thought better of it. If Layton had a point to showing the others this video footage, I didn’t want to derail it.

“And there’s Santoro’s hot chick picking Sam Leigh’s pocket.” Layton glanced over at Pierce. “We can get Faye to clean up the image—get a possible ID?”

Obviously he hadn’t seen me standing behind the others. “I already know her ID.” And so did Pierce, though I wasn’t sure if I should reveal that.

That got the team’s attention, and they remained silent, waiting for more. Pierce’s gaze was stormy—did he know I knew about him and Laura? I gave them the bare minimum. “Her name’s Laura Morgan.”

“Really?” I couldn’t help but test him. “She mentioned you.”

His jaw set as he gave me a stare akin to one he’d give a suspect, only I hadn’t committed a crime. He was trying to figure out if I knew, and irrationally, I wanted to laugh.

“You know her, boss?” Layton asked.

“Uh-huh…” He looked away from me, stared at the image of the tall brunette.

“Let me guess,” Santoro said. “Gotta be an ex-girlfriend.”

I was surprised he’d admitted it so easily. Then again, if she was about to be pulled in for questioning, he’d want to get that out of the way in case she mentioned it in interrogation.

“And you, Faye?” Beaumont asked, raising an eyebrow. She’d always been the quickest to put together new information.

I changed the subject, taking my phone from my lab coat’s pocket and holding it up. “Need me to get her in here? I have her on speed dial.”

Santoro beat Pierce to the obvious question. “How do you have Pierce’s ex’s number, Faye?”

I shrugged. “If you have the security tape of the dance floor, you’ll see.” I wasn’t quite sure what to say. Better that they come to their own conclusions.

As Layton switched to another tape, which showed the bar area and part of the dance floor, Pierce rounded on me. “You were there last night and didn’t mention it. Why?”

I glared at him. Even if he was concerned that Laura had outed him to me, that was no reason to treat me like a suspect. “One, I had no idea what case you were working on until now, and two, we left before anyone found the guy’s body. Do you want me to take a lie detector test, too?”

He transferred his suspicious glare from me to the screen, and in silence, we all watched Laura enter the picture, tucking something into her purse before grabbing the arm of a familiar, redheaded figure.

While my image on-screen spun with a smile and hugged Laura, I stepped away from the team, hitting speed-dial and raising the phone to my ear. I only got Laura’s voicemail, so I hung up and sent her a text message asking her if she was free to meet me earlier than we’d planned for our lunch date.

As I returned to Pierce’s side, the images of Laura and I headed onto the dance floor, then started to move together in a dance that began as flirtatious, then became teasing, then overtly sensual. I had to admit, we were a hot couple. I was starting to feel a little embarrassed about how good we looked together on the tape.

I hardly needed to look over at Santoro and Layton to know they were both acting as though Christmas had come early. What was it with guys and the whole girl-on-girl thing? Okay, there was twice as much to look at, but that whole fantasy of the girls inviting the man to join in only worked if both of the women were bisexual. And actually wanted a man around at that moment.

Pierce was showing more class. Or maybe he was just a lot more unsettled that Laura and I were together than he should be.

The whole team already knew I was bisexual, anyway—when we’d all gone for drinks on Santoro’s birthday last year, I’d taken a female date. I didn’t get how Santoro and Layton could react exactly the same way today as they had then, but I wasn’t about to start a debate with them about it.

I watched Pierce as the tape showed me pulling Laura into a possessive kiss. No one but him would pick up on the Domme/sub power play between us, but he’d be looking for it.

Well the book started right off with drama and making it a turn pager. However it was concluded quickly and the rest of the book was smooth sailing until the ending. So the beginning and ending are page-turning...

The fans of the CSI franchises should like this with its forensics and cop action.  Fans of kinky erotica will love it. A decent read.

Share what you thought about Dominance and Deception and earn reward points.

Do you have any suggestions/tips for aspiring writers and authors you’d like to share?
Read a lot, write a lot, do things that inspire you. If you really want it badly enough, you’ll find the time to sit down and write. Plan if it feels right for you, but don’t force it if it doesn’t work for you. You should know your ending in advance, though.