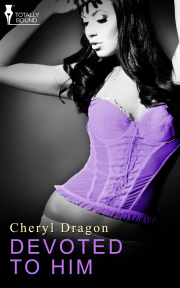 Both from broken homes, Jason and Fiona take marriage very seriously. Will tradition ruin their kink or make them even more committed?

Jason Abbot is a man who has everything, including the perfect submissive fiancée. His parents' ugly divorce and Fiona's lack of a father at all in her life has him convinced that commitment and tradition are the only ways to make them both feel safe. Marriage won't curtail their bondage play or his dominant side. However, one change seems only logical—Jason has shared Fiona with other Doms before, but how can he share his wife? When she starts questioning that change, his doubts grow. Being a good Dom is one thing but being a reliable husband is another.

Fiona loves only Jason but enjoys letting Doms-in-training practise on her and pleasing two men in role-playing scenes. She also knows just how much Jason loves to share and watch her in action with other men. Her entire sex life is about what Jason wants since he fulfils her needs perfectly. Commitment doesn't have to mean cutting out what they both enjoy. She knows she can live without other men, but marriage is forever and she doesn't want him to grow bored with her. Pleasing him is all that matters and she knows when pushing back is better than obedience—especially when he punishes her so well!

Surveying his Malibu compound as the limo pulled up the long horseshoe drive, Jason Abbot smiled. He’d hated being away from the calm order of his California life. With the wedding only a week off, he needed to keep his fiancée free of jitters.

She’d never show a hint of panic or stress, and his sub was eager to please in bed. There he could work out all of her nerves, because weddings were stressful times, whether she admitted it or not.

There she stood, poised on the porch waiting for him. Fiona Brandon’s curves couldn’t be missed in the proper skirt suits she wore. Her wavy reddish brown hair was pulled back but he could see her inquisitive brown eyes on him. Over a year ago, she’d been hired to provide his chain of luxury tourist bed-and-breakfasts with custom flower arrangements. Back then she’d worked for a place in Beverly Hills. Now she had her own company. The work and vision had been hers, he’d only encouraged her.

The woman to thank for the match was their housekeeper, who’d originally picked Fi’s flowers for the compound. Mrs Caster stepped out onto the porch and waved as the limo stopped. The round woman took no crap and made no fuss about any kinky games played in private.

The driver opened the door as the staff of maids unloaded the luggage. Jason had two sealed boxes in the car with him. Carrying them out carefully, he glanced back at his friend, who said, “Have a good one.”

Jason nodded to the driver. “Take Teddy home so he can freshen up and settle in. He’ll be back for dinner in a few hours.”

Fiona waved at Teddy as well. When the limo was gone, Jason followed Fiona into the house and she hugged him tight. Without fail, her mouth found his. “I missed you. Did you have a good trip?”

“Profitable, in the end. Don’t make me drop these packages,” he warned.

She grabbed one box and set it safely on the entry hall marble table, which was graced with a gorgeous creation of hers. Only she could make cactus so dazzling.

“What are they?” she asked.

“Gifts for you. Be careful with them.” He set the other box down and hugged her from behind. Her flared hips and round ass pressed back against him.

“May I open them here or are they private gifts?” she asked.

The woman had self-control and he loved it. She wasn’t a whimpering lost sub nor was she annoyingly bratty. Fi knew herself and her limits well at twenty-nine. He’d never imagined getting married but she had been the one to change that in his mind.

He slid his hand up and pinched her left nipple. The piercing was a gift for the engagement—a proper ring for her finger and the custom stud for her breast. She leant back and kissed his cheek before opening the first box.

“Oh my. These are so rare!” She lifted out the samples of purple lady slipper orchids.

“They are. But that is your favourite colour. I asked them to get me something very uncommon. You can grow your own.” He smiled.

She opened the other box and found more purple.

“Those are campion. Another rare one but I’m sure you can grow them here. If anyone can, you’ll do it,” Jason said.

She turned in his arms and kissed him hard. “Thank you. I’ll do my best with them, but they’re so hard to make thrive.”

“That’ll be a great challenge. Upstairs in ten minutes.” He smacked her ass.

The communication necessary to this lifestyle is well defined and explored by Cheryl Dragon: conversations are real and believable, with a solid exploration of each character’s thoughts through some...

I absolutely loved Jason and Fiona. Jason is a hot number. He likes to keep his fiancée on the edge, but he’s also quick to pleasure her. Their symbiotic relationship is evocative, making me...

Share what you thought about Devoted to Him and earn reward points.