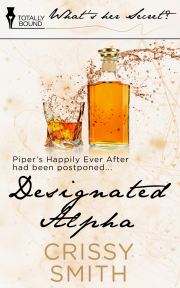 The scent of salt water hung heavy in the air as the full moon lightened the dark crashing waves. Piper Maxwell stepped from the dense woods surrounding the area and onto the cool sand of the beach. Her paws made deep impressions as she climbed down the small sandbank.

Her heart pumped a frantic tempo while her body trembled in anticipation. She’d spent a couple of hours playing alone and letting her wolf enjoy freedom. Now she would hunt down a completely different kind of prey from the rabbit she’d chased only an hour before.

Though his time she had no intention of hunting the prey for dinner.

She caught a faint trace on the light breeze of someone close and lifted her head. She breathed deeply, her nose twitching, trying to determine the direction of the smell.

There, to the right.

Piper leaped down the rest of the incline and silently stalked toward her reward.

Even in her shifted form she kept her human intelligence. However, the more time she spent in her other form, the more she could feel the wolf’s instincts strengthen. She didn’t know whether it was normal for her to feel her wolf getting stronger. There was no one that she could ask the hundreds of questions she had.

The only connection she had with another shifter was the man who had turned her into what she was. After running for years, six months ago Joe had found her, and she’d had to kill him to protect herself and Jace.

If she hadn’t ended Joe, he would have killed her, Jace and anyone else who had gotten in his way. Still, although she knew she’d done the right thing, she had bad nights when she remembered her teeth sinking into Joe’s flesh. Sometimes the nightmares were so realistic that she almost believed he was haunting her.

She stumbled over a broken log and that jolt brought her attention back to the present. She wouldn’t let the memory of Joe ruin her night. She refused to go back and relive it again. While the human part of her was still mortified about what she’d done, the wolf was proud. Piper had protected her mate.

Satisfaction that she could—and did—defend her lover, had her wolf side gloating inside.

Piper pushed away the feeling by mentally blocking the thought. It had taken a lot of time for her to realize that she was able to do that.

To get control of herself once again, Piper shook her body and raced down to the shore. Her wolf enjoyed the exercise and she could use it to tire her animal out.

She knew she was going in the right direction by small catches of a familiar scent. Several yards down from where she’d started she slowed, darting a look around.

Panting, she stopped and listened.

She had no idea what her face would have looked like right then but she was smiling. The aroma of her quarry was close and she could even pick up the faint crackle from a fire.

She followed the trail up the beach farther back away from the water. The sand beneath her paws was soft and helped her move in silence. She was coming up from the south, down-wind, knowing the element of surprise was on her side. He had his back to her as he crouched over the fire poking at it with a stick.

Piper hunkered down and waited.

There was no chance that she would ever hurt this man. Jace Anderson was her mate. The word floated around in her mind and it was her wolf side that liked that word.

As a human she loved Jace as her partner. As a wolf she ached to claim him, for everyone else in the world to know that he belonged to her.

For several months she’d struggled to keep the animal instinct from doing just that. To claim Jace, she would have to bite him, and that scared her. She had no idea what consequences would come from her sinking her teeth into his flesh.

She would not let Jace be changed the way she’d been.

He straightened and tossed the stick in his hand away. Piper admired his strong, broad back. She loved to run her hands and tongue over his bulging muscles. Squirming, she bit down on her tongue to hold in the sound of her need that wanted to escape.

Piper was impatient for the man to turn toward her so that she could see his face. Considering her options, she came up with an idea. She thumped her tail against the log to her side in three quick beats before she froze again.

He turned, his gaze roaming around the fallen logs and darkness. She didn’t have long before he would spot her. The muscles in her legs bunched as she prepared herself. Just as he rotated to face her fully, she pounced.

In a well-practiced move, she leaped at his chest, knocking him back. His arms closed around her as the fell to the ground. She let out a rumble as he buried his hands in her fur and held her tight. She loomed over him, running her long, rough tongue over his cheek.

“Okay,” he said with a laugh and pushed her head to the side. “You got me.”

Pleased, she climbed off him so he could sit up. Settling next to him, she rested her chin on his leg.

Jace liked to talk to her, even if she couldn’t respond back. She pawed his hand, wanting to feel it back on her.

“All right, I get it,” he said petting her side again.

Piper wiggled around until she was comfortably laid out listening to Jace’s voice.

“I got an email from Mitch today. He downloaded several files that he wanted me to take a look at.”

Mitch Ryan was Jace’s best friend whom he’d known since their Special Forces days. So far Piper hadn’t met the man, but she had the feeling that soon she would no longer be able to put off the introduction. Not that she didn’t want to meet him…exactly. She just knew she wasn’t what anyone would expect or want for their best friend. Fully aware of her shortcomings that didn’t even include the fact she turned into a freaking wolf, she was lucky to have Jace.

Jace loved her. Sometimes Piper still waited for him to catch on that she wasn’t good enough to him. She was certain when his best friend was there that Mitch would point it out to Jace as well.

Time was running out and she knew it. Jace had contacted Mitch, the best hacker he knew, in hope of Mitch being able to help in their investigation on her shifter origin. There weren’t many avenues they could search without drawing attention to themselves. Jace believed one hundred percent that Mitch would never betray them. Jace had saved Mitch’s life not once, but twice.

Her secret would have to be revealed to a stranger for the first time, if Mitch hadn’t already figured it out by what Jace had requested from him. She sure hoped that Jace knew what he was doing. As much as she wanted to find out about what she was, she still feared what would happen if the wrong person found her.

In the years she’d been on the run, she had met very few people like herself. The ones she had met had either wanted nothing to do with her or hadn’t given her the chance to talk to them before disappearing. It was upsetting that she’d had the chance at getting real information from someone who knew what she was going through and had ended up disappointed every time.

Jace strongly believed that the more they could find out about her gift, the better chance they had at protecting themselves. Piper hadn’t been so sure but over the last couple of months, Jace had talked her into looking more into it. She knew he was doing it because he loved her.

She went along with his plan for the same reason.

There is a good rapport among the characters, not just the sexual chemistry between Jace and Piper. Mitch and Bobby add an important element to the storyline, as does the introduction of Brian and h...

Share what you thought about Designated Alpha and earn reward points.

Jen:  Tell us about your newest release.
Crissy: When I was asked by Totally Bound to be involved in their new imprint What’s her Secret? I wanted to write something different from my usual style while still remaining true to what I wanted to write.

I am super excited to be here today! I would like to talk to you about my latest release Designated Alpha and how I switched the gender roles by having a strong Alpha female. Yes, you read that right… our heroine is the Alpha and she’s the one in charge.