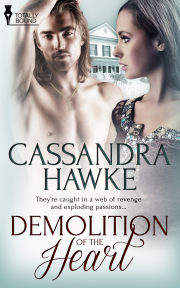 Demolition of the Heart PRINT

Wade Faxton and Kayla Mackenzie clash heads on for the ownership of her beloved family home. They are caught in a web of revenge and sizzling passion that puts both the house and their hearts at risk.

Still glowing from a passionate encounter, Kayla is devastated to find out the object of her passions, Wade Faxton, intends to demolish her historic family home. Fiery tempered and impetuous, Kayla challenges his ownership and finds herself caught in a complex web of revenge, lies and murder.

The smouldering lust between them cannot, however, be ignored. Kayla can’t resist succumbing to his charms, falling into his arms and bed at every turn as their attraction explodes into an inferno of desire. Kayla must learn to face the truth, though, and soon nothing matters to her but exposing the reality behind her suspicions and bitter accusations. Will she find a way that they can be together without making untenable sacrifices?

Kayla slipped on her new gown, feeling the sensual swish of the satin lining slide over her freshly washed skin. The tight bodice clung to the fullness of her breasts and the delicate green chiffon drapes swirled around her knees in feather light caresses. With the current heat wave, she was glad she had chosen a short dress with a low neckline and little beaded cap sleeves. She pulled her long auburn tresses up into a neat chignon, attached her sassy little fascinator with its sparkling peacock feathers to the side of her head, and slipped on her strappy slides. There. All done.

Despite the remnants of jet lag that still clung to her mind, she was determined to enjoy herself today. Her early return from Scotland and attendance today at the annual Melbourne Cup Luncheon meant a lot to her dearest friend, Jessica. She wanted to express support for her as she struggled to find a positive outcome in her younger brother’s cancer diagnosis. While her parents dedicated their lives to supporting Robbie, Jessica worked tirelessly to raise funds to support the organisation that had supported her family during their crisis.

When they arrived, the function room was buzzing and Jessica held her arm tightly as they made their way through the swirling crowd. They were barely seated when a short, matronly woman rushed up and hugged Jessica.

“Oh my dear, it is so nice to see you here today. How’s our darling, Robbie?”

“And this is your friend…” Mrs Lindsay-Jones waved her hand slightly to indicate Kayla.

“Yes, this is Kayla Mackenzie. Kayla, Mrs Lindsay-Jones.” Jessica smiled from one to the other as she made the brief introduction.

“Well I hope she won’t mind, but I am going to steal you away for a short time. There is someone I want you to meet.”

“You go, Jessica. I’ll have a look at the silent auction while you’re gone and see if anything takes my fancy.”

While Jessica was dragged into the milling throng by the older woman, Kayla made her way to the silent auction. There were some impressive items, and this was just a sideline to the main fundraising auction to be held between the main course and dessert.

Keen to make a contribution she picked up the pen and bent over the bidding sheet for a couple bottles of good Barossa wine. She sensed someone close behind her.

“A nice drop.” The male voice was deep and well modulated.

With her name signed she straightened and his tangy aftershave wafted tantalisingly around her. She felt the heat radiating from his body as she turned and looked up into a pair of golden hazel eyes that were attractively emphasised by fine lines crinkling the corners.

She held out the pen. “It’s for a good cause. Are you going to place a bid?” she asked.

He reached out and took the pen, his fingers brushing delicately over hers as they closed around the writing instrument. Kayla stared up at him, her light-hearted animation shimmering into a liquid shower of awareness under the mischievous spark in his eyes. He slowly let his gaze slide from her face, over her breasts, and down the length of her body, right to the strappy slides on her feet.

“Of course,” he replied. His grin blossomed into a genuine smile that tugged his wide, shapely mouth into a generous curve that accentuated the fullness of his bottom lip and moulded the slightest of dimples on his cheeks.

The deepening lines on both sides of his mouth added strength to his angular jaw that was lightly dusted with designer stubble. He stepped around her, sliding past in a sinuous dance step, not touching her, but so close the force of his movement ruffled the chiffon of her skirt. Involuntarily, she stepped back as he bent over in front of her to reach the bidding sheet and scrawl a bid. The masculine aura that emanated from him held her entranced as she openly studied the muscular curves of his back and shoulders and his neat derriere, stretching the seat of his trousers before they hung lightly over long muscular legs. There was something familiar about this man, as if she should recognise him or had met him before, but she couldn’t put a name to the face.

Frustrated by her inability to recall where she knew him from, she dragged her blatant ogle away from his derriere just in time to meet his when he straightened and stepped to the side of the table.

“Now that I have completed my obligations to the cause, perhaps you would indulge me in a circuit of the dance floor,” he asked.

“I’m not much of a dancer…” she murmured.

In response to her trailing silence, he held out his hand. “Wade Faxton—a client of Douglas, Moore, and Associates.”

She flinched and almost snatched her hand from his. Of course…Wade Faxton, the gambler and loan shark’s son—the one she had the hots for in university, but stayed away—not because he was the boy from the wrong side of the tracks, but because she had still been smarting from her bitter break up with her childhood sweetheart.

She took a deep breath and slipped her hand into his warm, encompassing palm. “Kayla Mackenzie,” she announced.

His clasp was firm and the shake controlled, but there was no overly masculine posturing that had in the past left her with numb fingers. As he shook her hand, she studied him—the impressive height, his unruly, collar length hair, the designer stubble that accentuated the square chin indented with the slightest of clefts, and the gold earring in his left earlobe. He was an assured, confident man most women would sneak a second glance at. As she looked back up into his eyes, she realised he had not released her hand.

“Ah, the Kayla Mackenzie, the one who wouldn’t date me in uni because my pedigree wasn’t prestigious enough…”

Her face seared hot. “That’s not true, Wade. It had nothing to do with who you were…”

He raised his eyebrows. “Really, but that’s what all the society girls said,” he murmured. A sardonic grin distorted the line of his mouth ever so slightly.

“Well, in my case, it’s true,” she said. “I was nursing a bitterly broken heart. It was a bad time in my life. I didn’t have any room for romance in my heart when I finally snapped out of it, you’d graduated.”

He gave a genuine beam of pleasure now and a little bow. “Well, seeing it is bad manners to argue with a lady I will accept your explanation but in exchange, will you indulge me in a dance or two? Just to show there are no hard feelings,” he asked.

In an effort to break the spell he seemed to have cast over her brain, she laughed lightly, glanced at his shoes, then back to his face. “If you do not value your toes, Mr Faxton, the answer is yes. I will join you on the dance floor.”

“Never mind my toes, and please, call me Wade. I think we go back far enough to dispense with formalities.”

She smiled and nodded as she allowed him to lead her towards the dancers.

His palm rested with deceptive lightness on the bare skin of her back as she reached up to his shoulder. With practised ease, he clasped her hand in his as he swept her onto the crowded floor. With ease they glided between the other dancers in perfect rhythm, he drew her closer until their bodies touched with the lightest of contact. A glowing spark of uncertain sexual awareness slipped uninvited through her body and she found herself nestling into his embrace as they moved as one.

Share what you thought about Demolition of the Heart PRINT and earn reward points.