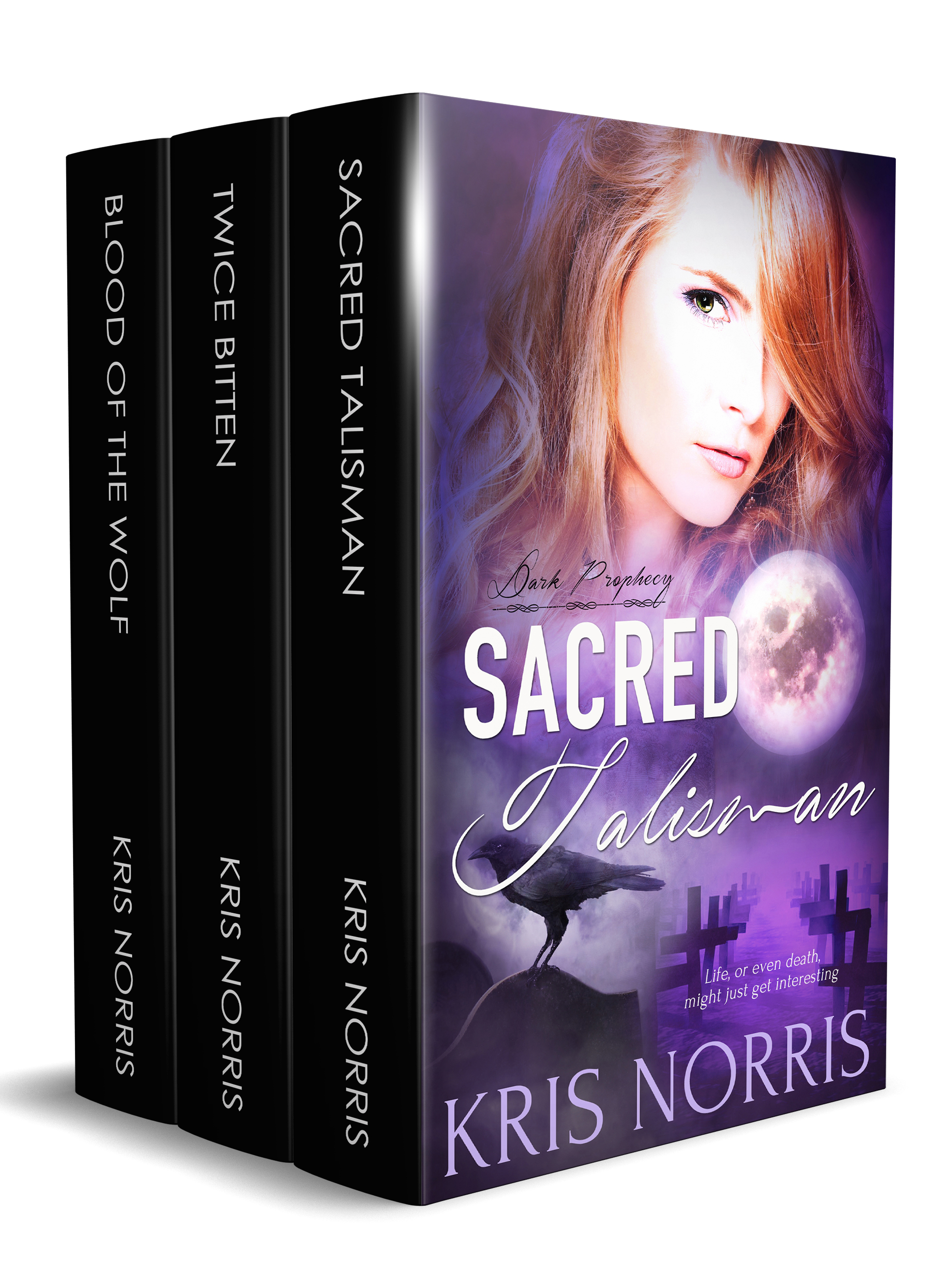 Dark Prophecy series
Sacred Talisman
After roaming the earth for five hundred years, Rafe's life is about to begin.
Rafe isn't your ordinary vampire. He's an enforcer-a vampire created for the sole purpose of guarding a sacred talisman and preventing its power from being unleashed on the world. There's just one problem. He has absolutely no idea how to find it.
The last thing Terryn expected was to have a handsome stranger come to her rescue when some creep drags her into an alley on Halloween. With blonde hair, blue eyes and a body rivalling every wet dream she's ever imagined, she can't help but wish her hero would keep her pinned to the wall. Too bad she doesn't do one-night stands. But when the guy claims her necklace is an ancient talisman, and it's his job to protect it, she's launched into a world of prophecies and vampires, and discovers sex with the undead is hotter than her wildest dreams.
Now if they can only survive the night and prevent a hoard of rogue vampires from claiming the pendant's power, life-or even death—might just get interesting.
Twice Bitten
Twice bitten…once saved.
Despising the sight of blood isn't a desirable quality for a vampire, never mind an Enforcer, a vampire sworn to protect a sacred talisman from those seeking its power. Couple that with a twin brother who can feel and taste your every sensation and immortality feels more like a curse. Too bad Gabe and Mathias' troubles have just begun.
When the guardian of their talisman literally falls into their lap, they discover the draw of the pendant goes much deeper than just their pledge. It rekindles their sexual desires, and they'll use all their vampire tricks to lure Ripley into their bed, and into their withered hearts.
But when Ripley discovers the truth, her life and the fate of the talisman are put to the test. Can the men earn back her trust or will this sunset be their last?
Blood of the Wolf
Ruled by instinct—bonded by blood.
A simple task—all Gideon had to do was find the guardian possessing the talisman he’d been sired to protect and keep them both safe until the first rays of dawn neutralized the power hidden within the pendant. Coupled with the fact he’s one of an elite band of vampires—enforcers, chosen for their superior fighting skills and unyielding fortitude—the mission should have been Gideon’s finest achievement. Except for the part where he’s been searching for five hundred years and the only thing he’s found is a loss of faith.
He didn’t count on stumbling upon the girl in the midst of a full moon. Or that the bond between them would be more than just a necklace—a sense of honor. Driven by desire, the only thing that burns hotter than their need to touch, and taste, and claim, is their mutual inability to mark each other as mates.
A simple task that’s quickly falling through his grasp. For how can a vampire truly bond with his mate if her very blood is poison?
Reader Advisory: These books contain scenes of mild bondage and anal sex.

Rafe walked along the sidewalk, his collar turned against the late fall rain. He cursed the endless drone of humans parading down the street, dressed up as vampires and demons. The morons wouldn't recognise a demon if the fucking thing bit them in the ass. And their take on vampires...hell if he bumped into one more cape wearing, cliché sprouting, Angel wanna-be, he'd forgo his usual animal fare and suck the asshole dry.

He huffed and turned down an alley, needing to distance himself. The constant cheer only emphasised his own inhumanity, and he didn't need the reminder. The distant thrum of music vibrated through the air, as he stopped midway, shouldering up against the wall. He recognised the beat, familiar with the type of dancing that accompanied the song. Women, dressed in nothing more than bras and boy shorts, undulated across the dance floor, rubbing against any male body within reach. Then they'd follow their catch into the back rooms, fucking them against the wall or on any handy surface. The rooms were videotaped, but he doubted most of the lovers gave a damn.

A sharp clicking rang behind him, drawing his attention. He turned, pushing his back into the rough brick. A woman strutted along the pavement, dressed in what he guessed was a black cat costume, sporting a bustier with a lace garter and matching thong. Her fake velvet tailed swished across her calves, the soft sound echoed by the light patter of rain. She stopped several feet in front of him, casting a long, seductive gaze back across her shoulder. Her lips twitched into a smile as she rubbed her leather flogger across the sensual curve of her ass, slapping it against her pale flesh. She shrugged at his indifference and continued up the alley, no less confident she'd be able to sell her wares inside the bar.

Rafe growled, letting the rain cool his skin. How long had it been since he'd felt any form of desire heat his body? Since he'd revelled in the feel of a woman's skin against his, her feminine scent surrounding him like a sensual fog? Breathed in the earthy sweet aroma of arousal until he could taste the flavour on his tongue? He loved eating a woman's desire, the warm, wet juice filling his mouth until the succulent essence was all he knew.

There was a time he would've been more than willing to take the woman up on her offer. To watch her body beneath his, her hands bound in silk ties, stretched out in front of her. He liked to bind both arms to the same post, accentuating the play of muscles across her back as she fought to free herself. Her skin looked pale, and he couldn't help but wonder how dark the bands would contrast against her flesh, or how much it would flush as he brought her within reach of her climax.

Rafe cursed, slamming his fist against the wall. It'd been over a century since he'd indulged in pleasures of the flesh, his ability to couple fading along with his hope. He was a vampire, for fuck's sake. Yet one cursed like few others-an Enforcer-destined to roam the earth searching for the sacred talisman he"d been created to protect.

"A vampire with a overactive conscience...who would have thought such a wretched creature existed."

He turned towards the street when a faint whimper vibrated the air. He looked over his shoulder when it sounded again. "Damn it." He glanced longingly at the street. He shouldn't care, shouldn't get involved. He was supposed to be a soulless, bloodsucking parasite...what the hell did he care if some woman was raped or killed? He'd saved his share of damsels in distress, and was just as likely to get a knee to the groin as a simple thank you.

The words cut through Rafe like a knife. He shook his head, allowing his body to shift, giving the illusion he simply appeared at the end of the alley.

"You know. The more you fight, the more this will hurt."

The creep chuckled, trying to rip the woman's pants down. She countered his attempt, deftly connecting with the moron's cock when he opened his legs to get a better vantage point. The guy doubled over, cupping his shaft in one hand as the other locked around her hair, pulling her face even with his.

The Dark Prophecy Box Set contains the three stories of the Dark Prophecy series. In it, we meet Rafe, Gabe, Mathias, and Gideon. All vampires, all charged with keeping a talisman safe... once they...

Share what you thought about Dark Prophecy Box Set and earn reward points.