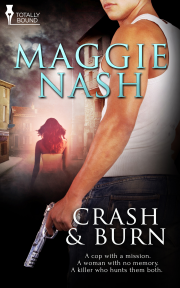 A cop with a mission. A woman with no memory. A killer who hunts them both.

Plagued by nightmares of a horrific train crash, Beth Hamilton returns to the scene of the accident. Her attempts to regain her memory unwittingly put her in the firing line, leaving her fleeing from a deadly enemy she can’t remember.

An unlikely partnership with sexy federal agent Daniel Wyatt triggers a dangerous chain of events and thrusts her into world where secrecy and subterfuge rule. The enemy appears to know their every move, and has them running for their lives.

They must learn to trust their instincts, because in this race against time, the enemy might be closer than they think.

Publisher's Note: This book was previously published elsewhere. It has been significantly expanded, revised and re-edited for release with Totally Bound Publishing.

Beth jolted awake, the crumpled sheets damp and musty as she shivered in a pool of sweat. She attempted to shake off the haze of another nightmare, but the fear that had her stomach in knots was too much for her to go back to sleep. If only she could remember what the dream was about. She’d had the same one over and over since the train crash eight weeks ago. Now, home from the hospital, she’d hoped they would stop, but they hadn’t—not yet anyway.

Her doctor had told her to give it time. Easy for him to say. It wasn’t just the dreams. There was the concussion and the banged-up knee. Apparently bad dreams were common after any head injury, but after a severe trauma such as a train crash, they were almost a foregone conclusion. Lucky me.

Post-traumatic stress disorder, the psych team called it. Yeah right. Of course it was traumatic recovering from her injuries—and stressful? Definitely. Who wouldn’t be stressed when they’d lived through an accident like that and had no memory of it? Not remembering wouldn’t have been so bad, except for the fact that part of her subconscious must remember something and it was torturing her. Why else would she be having nightmares every night?

But time—and giving a name to her fear—hadn’t stopped the feeling there was an important part of what happened that day that she needed to remember.

Something had definitely happened that day on the train, she was sure of it, and it had everything to do with how the train crashed. Why didn’t anyone else seem to know? Certainly not the hospital staff, nor the police who’d been to interview her. Or were they hiding something?

The official report said the driver had suffered a heart attack and the dead-man’s switch had malfunctioned. But if that was all there was to it, why were the detectives spending so many hours questioning her? What aren’t they telling me?

She needed to know. If she could remember, the nightmares might stop and she could get on with her life. She threw back the covers then grabbed her stick before shuffling to the side of the bed to stand up. Her knee continued to be sore after the surgeon had repaired the damage, although the sharp pain had lessened after she stretched the stiff muscles. By the time she reached her bathroom, she’d forgotten the pain in her leg completely as her mind was elsewhere, thinking about the uncertainty of her situation.

She couldn’t afford to wallow in self-pity, there were things to do, people and places to see, starting with an appointment with an old friend that she shouldn’t miss.

The silver-haired man sat and stared at his phone. He hesitated, taking extra time as he straightened himself in the chair. How was he going to fix the mess he’d gotten himself into?

He reached for the phone and his shaking hand punched in a long number from memory. A heavily accented voice answered on the first ring.

Silence stretched the moment, sweat tracing a path down his already damp neck as he waited for a reply.

“We expected this day would come. You’ll have to watch her closely. Do you believe she knows anything?”

He dragged the crumpled handkerchief over his brow and blew out a breath before he answered. “I don’t know for sure. According to my source inside the hospital, she has no memory of the train incident. We don’t know if this is a cover or the truth. And if it is true, we have no guarantee that she won’t get her memory back.”

“Either way, we will need to watch her.”

“Yes, of course. And if she does know something?”

Eliminate her? Could he do it? He didn’t know if he had the stomach for it anymore, but if it came to that, he knew someone who did—for a price.

“Have you thought about what you’re going to do next?” Dr. Bennett pushed his wireframe glasses back from the tip of his nose in a familiar gesture. “What about your studies?”

Beth smiled at the family doctor she’d known all her life. Normally she felt comfortable discussing her future with Dr. B. He was a trusted family friend, after all. But her University course could wait. It was an Internet-based course she could pick up whenever she wanted to, and she didn’t feel quite ready for that right now. “I’m not sure what I want to do yet. I should probably think about going back to work first. The insurance payout won’t be available for months yet and my bank balance is going to run low soon.”

“Don’t worry about that. You know I’ll help you out with money anytime. You do need to get back to your usual routine as soon as possible, but you should wait for the leg to heal before you go back to work.” Dr. Bennett’s voice held genuine concern as he hauled his big frame across the floor to wrap his arms around Beth. She’d always felt safe in Dr. B’s office. As a child she’d visited him often and had fond memories of him offering her jellybean bribes. The smell of the tan leather chesterfield brought it all back to her. But she wasn’t a child with tonsillitis now. She was twenty-six years old and needed to stand on her own two feet.

Lot's of twists and excitement! Fun read! Well written....could not put it down. If you like mystery, suspense and hot sex you'll love this book.

Share what you thought about Crash and Burn PRINT and earn reward points.