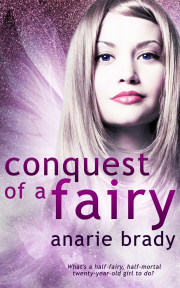 Conquest of a Fairy

What’s a half fairy, half mortal twenty-year-old girl to do? For Saoirse, the choice is simple—go to the world of the mortals and have a lovely adventure. What she didn’t count on, though, was becoming possessed by the Lianhan Sidhe, the same love fairy who took possession of her mother.

Once the Love Sidhe gains control of a fairy, the poor fairy has no choice but to seduce the first man who comes along. If the man succumbs, as Saoirse’s father did, he is doomed to death, but if he resists, the possessed fairy becomes his slave. Luckily for Saoirse, the first man she comes across is Angus—a strong-willed Irishman who will do anything to drive the Sidhe out of Saoirse.

What’s the mother of a half fairy, half mortal girl to do when her only child is trapped by the same powerful Sidhe she once was? Having traveled the same road, perhaps Morganna can help her daughter exorcise the Lianhan Sidhe. What she didn’t count on, though, was meeting Pat, the brother of her first love.

Pat likes a woman who knows her place and is willing to enforce his expectations with sound discipline when needed!

Reader Advisory: This book contains a scene of attempted rape.

Publisher's Note: This book has been expanded, re-edited and was previously published at Totally Bound Publishing by the author under a different pen-name.

Saoirse gazed at her own reflection in the crystal lake, mesmerized by the sadness deepening her emerald eyes. Then she sensed a presence next to her and saw a second set of eyes shadowed with concern, shimmering in the depths just behind her own. She gave a watery smile as her mother’s hand came to rest upon her shoulder.

“I feel a great loneliness in my spirit,” Saoirse sighed. “An incompleteness.”

“I’ve sensed it,” Morganna commented as she sat beside her daughter. “You are now twenty years old and are embarking upon the age of love. From now on, your body will age very slowly, allowing you to experience and enjoy life for a very long time. Why, in the world of the mortals I would be middle-aged. I’d be fifty!” Morganna laughed. “But here in our realm, no wrinkles mar my skin.

“Nonetheless,” she continued seriously, “you have reached a difficult time for any Sidhe. I don’t know how to assist you, but I feel something within that frightens me. I want only your happiness, but for that you must follow your own path, as we all must.” She gently stroked Saoirse’s long blonde hair. “For you, though, that path will be rocky, uneven and filled with danger.”

“How do you know?” Saoirse cocked her head, furrowing her brow.

“Because, my darling, a prophecy was told at your birth.” Morganna gently rubbed Saoirse’s back, offering what comfort she could. Saoirse could only stare at her mother. “Today I have finally been given leave by Cerridwen to share that prophecy with you.” Morganna wrapped her arms around her daughter and laid her cheek atop the fair hair.

“How I wish for a different path for you, Saoirse, but what is to be, will be. For you to understand, I must tell you a story.

“When I wasn’t much older than you, I wanted to take a journey to the other world, the world of mortals. I went to Cerridwen to ask permission. But she cautioned me that the attraction to a mortal man, a human, could be an awesome force, powerful enough to cause me to forget my home, this beautiful land. I only laughed. How could a mere mortal compare to our fairy men? Cerridwen continued her warning of possible sickness, hardship, hunger, even death, all of which I waved away. I wanted adventure, danger. I wanted it all. Finally she gave her permission and I was off.

Share what you thought about Conquest of a Fairy and earn reward points.