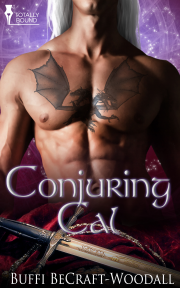 Love and Mercy are powerful forms of magic.

Gennie Pendragon understands magic isn't always good for the body or the soul. Born from the descendants of the mystical King Arthur and Merlin, she also knows the legends are real.

Excalibur, the King Maker, has remained hidden away for the past century awaiting his next master's hand to claim him. Once awakened, he has four days to test this unknown Pendragon. Only the Good and Just can wield his immense power, but Gennie is something he never counted on.

Nothing can change his destiny—not even their passionate love.

This book has been released previously. It has been expanded, revised and re-edited for release with Total-e-bound

“Hey, Gennie? Why couldn’t the knights get the sword out of the stone?” Sixty-two, with balding grey hair and sagging cheeks, Stevie bounced on his toes, an aging, but sweet six year old. Smudged, thick-lensed glasses slipped unnoticed down his nose. He clasped his favourite book tight against his chest, his moss green gaze following her every movement as she turned to put the lid back on the pot of sauce.

To Gennie Pendragon, the residents of Camelot House were not mentally defunct. Her charges depended on her to keep the order that they needed to lead productive lives. Gennie planned meals, oversaw medication, and kept the peace. Her guys were way more than a pay cheque every week. They were the children she’d never have. Smiling, she held out a hand for book number two of The Round Table Children’s Readers, The Boy Who Would Be King.

A few Christmases ago, her grandfather, Merle gifted the guys with the entire series. The gift was another blatant play on her guilt for abandoning her studies. Oh, Merle could play hardball with the best of them, but she appreciated the gesture on her guys’ part. Stevie loved King Arthur’s story best. After that, he claimed to love Gennie most. She had little doubt that by having his hero’s surname went a long way in keeping the peace on her shift. Gennie had been dubbed official house mascot years ago. With Merle’s bag of magic tricks and big heart, the guys adopted her grandfather as their own.

She stifled a laugh at Stevie’s persistence. A stranger would never guess that she answered the same question every afternoon. “You know, Stevie. You could just read it for yourself.”

“I like the way you read it.” Following her to the ‘Round Table’, a huge oak monster that took up most of the dining area, they sat while Gennie found the correct page.

Tracing a finger over the lovely caption, Gennie marvelled anew at the artist’shandiwork. Merle’s books held all the detail and rich artwork of an ancient tapestry. Young Arthur Pendragon, a gangly tow-headed teenager struggled to pull the sword from a boulder. That sword, Caliburn, would later be remade into the legendary Excalibur. Above, Merlin presided in fine robes and the traditional trailing white beard. Below, the crowd of knights and ladies pointed and laughed.

“See. Only the old king’s son could get the sword out.” Gennie traced the picture with one finger. No artist could truly capture the power and beauty of Arthur’s sword. At night, when she closed her eyes, she could feel the warm metal of the oversized hilt in her child-sized palm. The giddy rush of magic always woke her, yearning for more.

Another resident sidled up behind her, pulling her out of the reverie. Ben peered over her shoulder at the book. His pudgy body leaned into hers. Ben had almost no concept of personal space. In a slightly slurred voice, he began his favourite argument. “No, no, no. That’s not what Merle said.” Ben patted the pages with the hand curled from his stroke last February. “Tell me what Merle said, Gennie.”

Somewhere outside, the sound of a small engine started up. This came as no real surprise. In the last decade, East Texas winters didn’t get started until January. Here in Tyler, a well-maintained lawn might have growth until then. Slow growth, but enough to make the yard Nazi next door haul out his equipment for that sparse one-inch ruining the symmetry of a perfect lawn.

“Okay, just this once. Then, I have to start dinner.” Gennie still had her third charge to locate and find out if Rory was into anything.

Rory liked to help...a little too much. He drove their neighbour nuts, hanging over the fence to give advice on lawn care. On more than one occasion, Gennie had to make amends for Rory ‘weeding’ the neighbour’s flower beds. A lot of people didn’t understand that mentally limited individuals like Stevie, Ben, and Rory wanted the same love and compassion as everyone else. People shun what they do not understand.

Gennie turned the page. The next caption showed the wizard taking Excalibur from the old king, Uther Pendragon. She began to read. The artist had taken a lot of artistic license with the story, but he’d done an amazing job of simplifying it for young readers.

“Excalibur can only be used by a good man for a good cause. You are not just or good.” The wizard ignored the king’s whining argument and thrust the sword into a small boulder. Once Excalibur is released, one of your line has three days to prove himself worthy. On the fourth, the sword will return to its stony sleep.”

“Wow.” Stevie grinned. “I bet you could keep the sword, Gennie. Right, Ben?”

Ben shook his head, always on the opposite side of the argument. “Gennie’s a girl. Only boys can be king.”

Stevie took the book back, holding tight against his chest. “I bet Nick would help you keep the sword. He’s our friend.”

Gennie laughed. Poor Nicholas Myra, better known as Nick, was one of her grandfather’s failed schemes to see her happily married again.

Nick, a widower himself, sympathised with Gennie’s reluctance to move on. He was fabulously cover model sexy, an attentive date, and generous. Chumming around with him made the holidays fun. Too bad the sexual zing between them equalled zero. To her, it had been a bit like dating one of her brothers. Ick.

“Yes, Nick is a good friend. But with Christmas only days away, he’s a little busy right now.” Gennie gave the guys a conspiratorial wink.

Nick didn’t keep his job secret. If the world’s jaded attitude about magic bothered him, Nick never let on. That guy spread Christmas cheer for the three hundred and sixty-four days a year he worked at his other job raising exotic livestock.

Making little shooing motions, Gennie cleared the kitchen. “It’s time to start dinner. Just in case Nick decides to drop by early to let us beat him at video games.”

I loved the twist on this book. Buffi has a way of taking what is considered old, or even overplayed in the genre and makes it her own and buffs it up like new. I had never imagined a plot like this...

Share what you thought about Conjuring Cal and earn reward points.