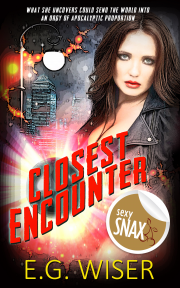 A strange object of alien origin has been found and the Department of Ufology has sent its top agent, Beth August, to investigate. Once there, she meets Brad Davis, a handsome security guard with a secret of his own. Together they both succumb to and struggle against the object’s aphrodisiac powers, eventually finding themselves in a race to prevent the world from exploding into sexual anarchy, even as the two of them grapple to understand how much of their own mutual attraction is due to an unexplained supernatural energy and how much is the more natural chemistry of two people falling in love.

Beth August felt it the moment she stepped out of her black government-issued sedan. A tingling somewhere behind her forehead that crawled down her face and neck like a mild electric shock. The feeling spread out as it reached her chest—professionally contained as it was in her well-tailored black suit—and intensified as it moved lower and deeper inside her.

She hadn’t expected this. This was only in the warehouse parking lot. The object that she was investigating was still at least a hundred yards and several steel doors and walls away. But she’d read the stories in both the official and the unofficial reports—vague accounts, from questionable sources mostly, but there had been enough for the governor to send her down for a look.

Beth wiped the sweat off her brow with the back of her hand.

It was a warm day but not that warm. The sweat was from something else—from the thing inside the warehouse.

She walked toward the front door of the warehouse, every click of her heel on the walkway like the tick of a clock counting down to something… What, exactly, she did not know.

At the door she hit the buzzer, waited for a minute. There was some small commotion inside—a sliding of bolts, a turning of keys. Finally the door opened to reveal the security guard.

He was the single best-looking security guard she had ever seen. There wasn’t even a close second. He looked like the guy they would use for the cover of a security guard catalog. Black hair, broad shoulders, strong jaw. In fact, he was the person they would have rejected for the cover for having too much sex-appeal. Get me someone blander, the editor would have shouted to his much-put-upon assistant.

“Can I help you?” the sexiest security guard in the history of time said. His lips were of the sort of fullness Beth preferred, which was to say, enough to be pronounced—to seem always a fraction away from forming a pout—but not so much as to seem petulant or anything less than masculine.

“I’m from the state,” she said, surprised at how her own voice broke a little, like she was a schoolgirl startled by the school’s star athlete while simultaneously trying to remember her locker combination. But she was not a schoolgirl. She was Beth August, Special Agent from the state’s Department of Ufology, and she was not a woman whose voice was in the habit of breaking. She attributed it to the strange tingling sensation.

She flashed her ID and swallowed hard to clear her throat of any more residual ridiculousness. “Someone should have told you I was coming.”

The guard stood back, held the door open, smiled.

“I was told,” he said. “But I didn’t even know the state had a Department of Ufology.”

Beth shrugged, entered the building. “The governor watches a lot of TV,” she said.

“So do I,” the guard said. “Still didn’t think the state had any Department of Ufology.”

“Maybe she watches different stations than you do,” Beth said.

Inside, the tingling sensation was about ten times stronger. Her panties became slightly damp. What the hell is that? And the tall and handsome guard wasn’t helping matters any. She could practically feel the heat of his body from where she stood. And the scent of him—some faintness of cologne with a more natural, manly scent on top of it. Jesus, he practically smells like sex.

This was funny, cute, sweet, and entertaining. I'd love to read more about Beth August and will "keep hope alive" that she gets a full length novel in the future!

This was funny, cute, sweet, and entertaining. I'd love to read more about Beth August and will "keep hope alive" that she gets a full length novel in the future!

Share what you thought about Closest Encounter and earn reward points.

Jen: Today we welcome E.G. Wiser to Romancing the Book. E.G., will you share a short bio with us?
E.G.: I have been a published writer and novelist since some time in the last century, but have only recently begun writing under the pseudonym E.G. Wiser. Closest Encounter is my first of what I anticipate to be many works under that name. Changing identity has completely revitalized me as a writer.