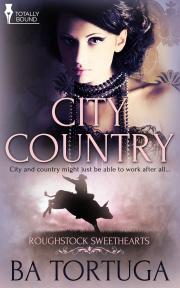 Book 1 in the Roughstock Sweethearts series

Traditional cowboy Cotton and tattooed Emmy couldn’t be more different. That’s part of their attraction, but different worlds can make for a lot of heartache.

Emmy doesn’t really like cowboys. She might be from Texas, but she’s a city girl, truly invested in keeping Austin weird, just like the slogan says. With her corsets and tattoos, she stands out at the western bar where she ends up after being abandoned by her friends. That might be why she catches the attention of Cotton, who’s a bull rider by trade, and definitely a cowboy. Cotton thinks Emmy might be the most fascinating girl he’s ever met. She’s not a cowgirl, and she’s not model skinny, but she’s beautiful and smart and he wants her like he’s never wanted anything before.

As one date turns into months of seeing each other in between bull riding events, Cotton starts to think that Emmy is the all-important One. Cotton’s friends and family might not be so sure, though. As Emmy’s life starts to unravel around her, Cotton has to fight his fears and his confusion to prove to Emmy that city and country might just be able to work after all.

“You’ve got to be fucking kidding me, Em.”

Emily was going to beat her best friend to death. With a hammer. A dull, rusty hammer. “Oh, stop it, would you? My fucking feet are tired, Ricki, and I want a goddamned beer.”

Ricki’s kohl-rimmed eyes went wide as she stared at the neon sign above the club. “The Wagon Wheel. Yay.”

Emily sighed and nodded, knowing this wasn’t the best possible choice, but the bus didn’t run for another hour and fifteen this late and Sixth Street was another hour’s walk and… Hell, her feet were killing her in her thigh-highs. Really. Even with the platforms, the heels were deadly.

Ricki blinked, looking more and more like a raccoon with each passing minute. “No, but the shit-kickers might.”

Country music types milled around out front, and a guy with worn-down boots and a big cowboy hat was perched on a stool by the door. “Ladies’ night. No cover for y’all, ladies.”

“Thanks, man.” She grabbed Ricki around one rubber-and-lace-clad arm and tugged. “Come on.”

Hell, if Ricki hadn’t fought with Preach and Tin Lizzy, they wouldn’t be hoofing it home from the rubber ball, would they? No. No, she’d be in the back of that weird-assed conversion van heading down toward SoCo.

Conversation just inside the door stopped dead when they walked in. The girls were all plaid shirt, Daisy Duke, straw hat types, and they obviously didn’t like the Goth aesthetic.

“Just one beer, huh? Then we’ll go.” Em doggedly tugged Ricki toward the bar, her desperately tragic-looking, waifish best friend managing to dig those Doc Martens in good and hard.

She was never going to live down The Wizard of Fucking Oz. Ever.

“Thanks, man. You’re a pal.” She rolled her eyes and let go, trying not to rejoice too hard at the way Ricki stumbled backward and almost fell. Knowing Ricki, she’d at least get her cab ride free. The skinny girls always did better that way. Em made her painful way to the bar, then propped herself up on a stool, and waited for the bartender to notice her.

As if anyone in this hick bar hadn’t noticed her five foot nine, corsetted, stiletto-heeled, pink and green highlighted hair, tattooed self.

The bartender was more freak-friendly than expected, with a ponytail and a gold tooth. “Hey, darlin’. What’ll you have?”

“A Shiner, please.” She smiled back, propping her heels on the rungs of the bar stool.

“You got it.” He gave her a wee napkin and some nuts before heading off to get her beer, which was when she noticed the little pod of cowboys standing off to her right.

Did they call a group of cowboys a herd? A round-up?

A posse. That was it. A posse of cowboys.

God, they were all tiny.

Her head was as big as some of their shoulders.

There was one who kept staring at her out of the corner of his eye. He was adorable, all red hair and big green eyes—that smile enough to light up Rockefeller Center at Christmas.

In a totally aesthetic way, of course.

He stood as if he owned the world, hips thrust forward and to the side a little, thumbs hooked in his front pockets. He glanced over every few minutes, each look longer than the last.

“No. No, the bottle’s fine, thanks.” She was a girl—she knew how to work a longneck bottle with the best of them.

“I… Yeah. Yeah, I am.” She pushed over a credit card for him to run. She wouldn’t have more than two.

“There you go.” He left her after that to fill a bunch of froofy beer orders for a little group of cougars dressed in really tight clothes. There was no way on earth those tits were all real. No fucking way.

She glanced down at hers, which were, if not little and perky, at least firm and very well presented. Not to mention the ink and the pretty little rings that no one could see. That made her grin, made her feel settled in her skin a little more.

She was getting good at ignoring the crowd and had just about finished with beer one when the bartender, whose name was Jib, came to check on her. “Want another one?”

She checked her watch. “Yeah. Yeah, one more. I have half an hour before the bus comes.”

“I’ll get this one, Jib.” The cowboy had a surprisingly light voice. Not girly or anything, but the kind of voice tiny people have.

“Oh? Thanks, man. That’s sweet.” It was the pretty cowboy, too, with a glint in his eyes that promised pure evil.

“Sweet.” He nodded, his chin strong enough to pound nails. “That’s me. Soul of kindness. What’s your name?”

“Emily.” She chuckled. Someone had lost a bet and had to talk to the scary girl. “What’s yours?”

“Cotton.” He held out a square, oddly pale but freckled hand. That single hand said a lot about him. It looked like it had been through a war.

That hand was strong, solid. Firm.

“Yep. When I was born, my momma thought I was an albino. I had little tufts of cotton white hair.” He grinned, and the world almost caved in. He had the most amazing smile ever.

“Oh, man. That is a wicked fun story.” She laughed, clapping a little bit. When his eyes dropped to her chest, she couldn’t help the little sense of ‘score’. “I’m just named after my grandmothers—Emily Cecilia.”

“I have an aunt named Cecilia. ’Course, she’s Mexican.” He laughed, too, nodding at the bar. “There’s your beer. Want to go sit?”

“Sure, for”—she checked her watch—“fifteen minutes. I have a bus to catch.”

She stood up and shook out her little skirt.

“A bus, huh?” He put the hand not holding his beer under her elbow, steering her a little. When she glanced over, his little cadre of friends were long gone.

“Yeah. I was at a party and my ride went AWOL.” Sort of. “So I walked a bit and thought I’d catch the bus home.”

He was stronger than he seemed. Really.

“I could give you a ride, Emily Cecilia. Got my truck.” At her raised eyebrow, he held up his beer in a defensive gesture. “No strings attached. I been on foot when the gang disappeared.”

“Yeah? It’s a little aggravating, especially in the boots.”

“I bet. I wouldn’t want you to have to ride the bus at this time of night.” They sat, him waiting until her butt hit the seat to slide into the booth.

“You’re sweet. Are you from around here?” Austin was one of those places where you couldn’t tell, not really. All sorts of people came from everywhere.

“I’m from up north of here some.” That glinting, pure-devil smile came again. “And you keep saying I’m sweet.”

“You keep not proving me wrong.” She took a drink of her beer, the cold bitterness just what she needed.

“Well, I’ll try not to let you down.” He tapped his foot, the boot toe making this neat sound. “So what do you do?”

“I design first person shooters with Fractal Monkeys.” It was a great job. She’d been the secondary designer of Betty Bosoms and of Crackhead’s Gang. She wasn’t going to get her own game, not any time soon, but… Right. Focus. Small talk. Pretty cowboy. “What about you?”

I have to say, the character pairing is very unique and not something I have seen done in a book before. I was skeptical when I first started reading it, but Emmy and Cotton work. Why? I’m not sure...

I liked the pacing of this book. I also liked the chemistry between the main characters. Even if they seem to be opposites, any reader will immediately see that they were right for each other. Of co...

Share what you thought about City Country PRINT and earn reward points.

Other books in the Roughstock Sweethearts seriesView Series Page