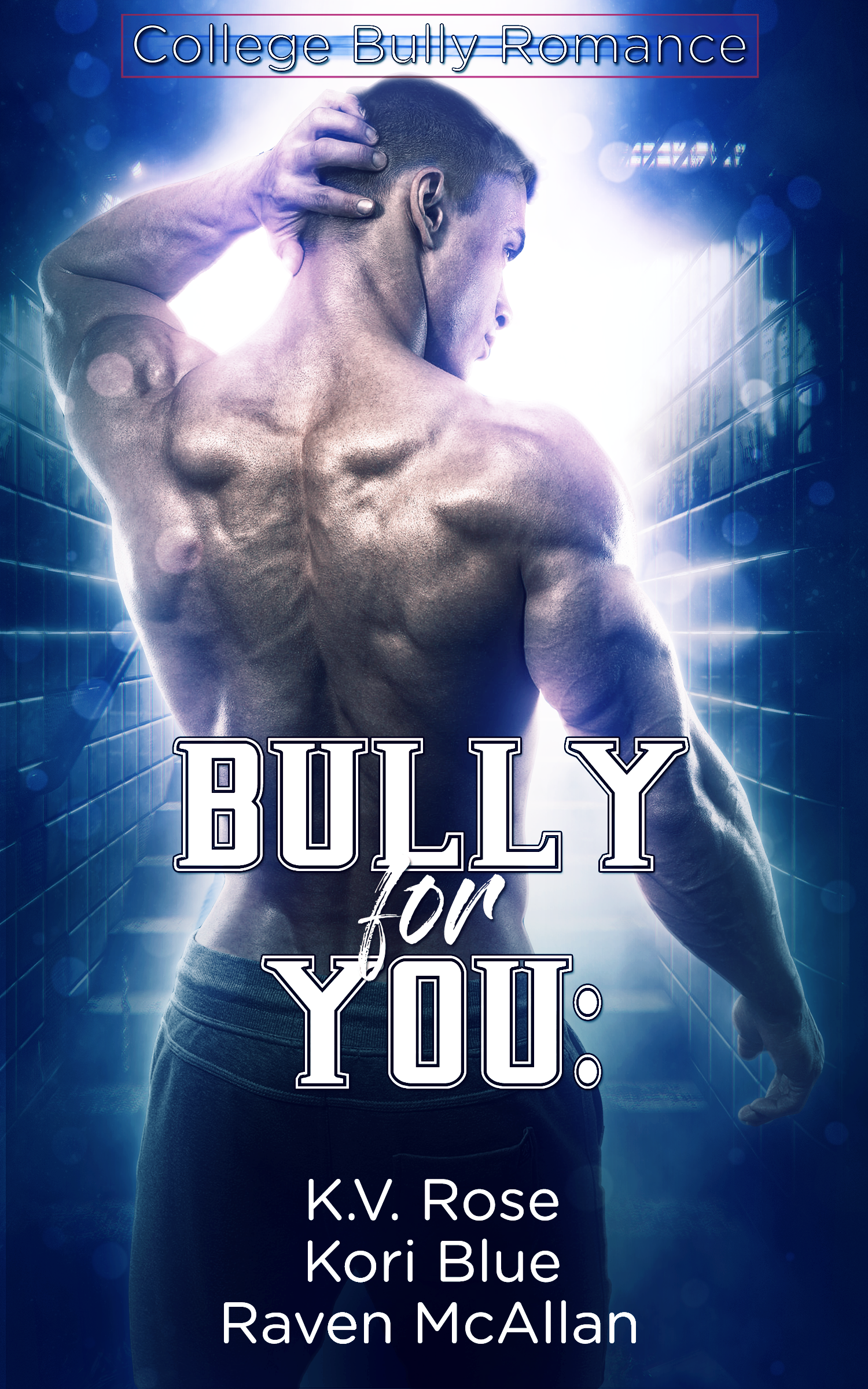 The Darkness at Fall's Creek by K.V. Rose

Sometimes it’s not the dead who haunt us.

Terrify us. Torment us.

I’ve been watching her for two years.

Two years I’ve dominated this college, on and off the court, and she hasn’t looked my way once.

And tonight, she’s the one who’s getting haunted.

Tonight, she’s going to find out that she’s mine.

Hot Off the Press by Kori Blue

College reporter Jax North hates working with arrogant rich boy Lucas Hargrove, but there’s an arsonist on the loose, and the sparks are already flying.

Journalism major Jax North has her eye on a scoop that could launch her career, but getting stuck working with arrogant rich boy Lucas Hargrove wasn’t part of the plan. Lucas is stubborn, sarcastic, privileged… all the things Jax can’t stand. Unfortunately, he’s also the hottest guy on campus. He drives Jax crazy in more ways than she could ever have imagined—despite her better judgment—and, when the unlikely duo’s investigation wanders off the beaten track, Jax finds herself in serious trouble.

A series of blazes have broken out across the small college town of Dalesburg, and Jax is trapped with Lucas in a burning building, with more than one fire to put out.

As the heady mix of lust and danger rises higher, the prickling tension between Jax and Lucas reaches fever pitch, and the flames aren’t going to be easy to extinguish.

He’s never had to chase a female before. Jake discovers it’s make a move or miss out. Chasing Charlie isn’t as simple as it sounds.

Jake Bannerman, aka Jake the Rake, isn’t used to doing the running, it’s usually the other way around. He hasn’t been given that sobriquet for nothing.

Charlotte—Charlie—Allsop, newly arrived in Scotland, is in for a culture shock. She has no time for his attitude and no intention of making his life easy. If he wants her, it’s up to him to make the first move.

Which he does—just not in the way anyone expects. He teases, she retaliates, and when he discovers her middle name, she enlists his sister’s help.

As they continue the most unconventional courtship, where neither will give way, sparks fly. It’s amusing to watch, not so much to be part of it.

Until the cookery contest.

When they both enter, the competition takes second place to their one-upmanship. Or does it? Will Jake be Jake the no longer rake? Will he have no need to be chasing Charlie? Only time will tell.

<p><b>Excerpt from ‘The Darkness at Fall’s Creek’ by K.V. Rose</b></p><p> I was the only one in the entire jock-filled classroom dressed in black. There was a sea of orange and blue—Caven University’s school colors—and a few boys in blue-gray sweats and white, fitted V-necks.</p><p>But I was the only one in black.</p><p>And, probably, the only one here who wasn’t planning to go on to play a professional sport or fall back on Daddy’s dream of law school.</p><p>I didn’t have a daddy.</p><p>I had no intention of going to grad school.</p><p>And my hand-eye coordination meant the only sport I was okay with was running, and that was just to stay in shape.</p><p>Thankfully, the lecturer dismissed sports psychology early, and I threw my notebook into my bag and stood, ready to get the hell out of there. It was Halloween night. How no one here in this bubble of testosterone and sweat could respect that with appropriate colors was beyond me.</p><p>“You dropped something.” <i>Fuck</i>.</p><p>I looked up, startled, and stopped trying to edge my way out of the stadium-style seats. A boy in a gray hoodie and dark blue shorts blocked my path.</p><p>“What?” I asked, confused, hefting my backpack higher on one shoulder.</p><p>The room was emptying and I wanted to get back to my dorm to prepare for horror movie night with my best friend, Holland.</p><p>The boy smirked.</p><p></p><p><b>Excerpt from ‘Hot Off the Press’ by Kori Blue</b></p><p> It was such a great dream. Jax was stretched out on a sandy beach, feeling the sun warm her skin and smelling the salt on the air—just like home. She could taste mango on her lips, and there was no sound but the waves and the distant chirping of birds. Sure, their calls were a little weird, but then she hadn’t been back to the island in a long time. Maybe she’d forgotten some of the details.</p><p>Slowly, Jax opened her eyes, watched her bedroom ceiling swim into focus, and realized where the noise was coming from.</p><p>“Oh, shit!”</p><p>She kicked off the covers and grabbed her phone, struggling to shut off the chirruping bleep that should have woken her thirty-five minutes ago. What in the hell had possessed her to use a new alarm app on a morning like this?</p><p>Heart pounding, Jax leaped out of bed in a flurry of swearing and panic, and almost tripped over her laundry hamper.</p><p>“God damn it!” she yelped, giving the wicker a solid kick.</p><p>Of course she’d oversleep today. Her interview with Paula Cox—design mogul, legendary entrepreneur and one of the biggest donors Stockard College had—was a coup for a humble student journalist, the kind of byline Jax had been working toward for her whole three years on the school’s prestigious media program. Of course she’d find a way to screw things up, or make it harder for herself, because when didn’t she?</p><p>A knock at the door sounded as Jax was halfway through stripping off her sleep cami and panties, and grabbing the day’s clothes from the hanger on the front of her wardrobe.</p><p>“Um… Jax? You up?” Ava’s voice came through the white-painted wood. “It’s gone seven thirty and I didn’t see you yet, so—”</p><p>Jax, still shimmying into her bra and trying to find a spare pair of hands to fasten her skirt, paused to wrench open the door.</p><p>“Late!” she squeaked. “So late! Oh, god…”</p><p></p><p><b>Excerpt from ‘Chasing Charlie’ by Raven McAllan</b></p><p> A red nose and freezing ears were not the best look. Especially when she wanted to appear cool, calm and collected and not at all bothered that instead of heading to uni in Hong Kong, across the harbor on the Star Ferry with her mates, she was standing in the freezing cold, waiting for the local bus back on the east coast of Scotland. Without any mates.</p><p>Life and its bloody curve balls.</p><p>Charlotte Xiao Méihua—phonetically Shu-Mai—Allsop, usually known as Charlie, stamped her feet to try to keep the circulation going and swore under her breath. Who on earth thought it a good idea not to bring hat and gloves out? It might say it was only autumn on the calendar, but no one had told the east coast of Scotland that. The uni playing fields which she passed on her walk to the nearest bus stop were white, and the pond nearby appeared as if it would freeze you if you went within three feet of it. Not that she intended to. She preferred to swim in warm and probably chlorinated, or salty, water. For one wistful moment she allowed herself to remember Big Wave Beach in Hong Kong, and long, hot, fun-filled days with her mates. One in particular, but that was over now, with no regrets. It was as they say—good while it lasted—but it wouldn’t have lasted much longer, even if she hadn’t moved away again.</p><p>Charlie blew on her fingers—it made no difference, and she suspected her nose was blue with cold because her hands were white. All she needed was something red and she could have a job imitating a flag!</p><p>Great look—not.</p><p>Why the hell had she chosen to live where she did? Okay nice house, great garden and independence, but shit, maybe she should have said sod it and found a flat share.</p>

K.V. is an author of dark romance living in Toronto. She enjoys iced coffee, writing villains, and everything in black.

Kori Blue writes adult romance with an edge. In her stories, you'll find sharp, sassy women who know what they want... and strong, sexy men who've got just what they need.

Kori's stories often involve some kinky fun, and explorations of fantasies from the sinfully sweet to the downright dark and dirty. From the intimate stories of couples in Kori's Between Lovers series to the daring exploits of a call girl-turned-madam in the Midnight Candy books, and the dark, twisted tales of passion and obsession in Juniper Lake, a Kori Blue book is guaranteed to pull you into a world of intrigue and intensity, with characters you'll love, and heat you'll never forget!

Ah, bully stories, love them or hate them, doesn’t seem like there’s much in between. I’ve been on the fence with them for a while now but have found that the ones I have read, I’ve enjoyed. Nothi...

Share what you thought about Bully for You and earn reward points.