Book 2 in the Club Serenity series

All seems to go well until a spanner is thrown into the works.

Kyle has had his share of women who weren’t the right ones for him and he’s quite happy being single—until he has a run-in with a redhead in his garden who triggers all his bells. Instant dominance, lust and intrigue flow through him and he wants her more than anything.

Just when things are looking up, Sellie is overcome by the phenomenon ‘sub-jealousy’, and all they have together seems lost. Now everything hinges on the strength of their bond, Sellie’s ability to bounce back and Kyle’s perseverance.

He looked up from his work and a frown spread across his face. He was busy with intricate calculations and he needed peace and quiet. That was why he had chosen to work in his home office for the day.

He stormed out of his office and stalked into the living room. The hi-fi was on there all right, but the music floated in through the open patio doors. It was coming from the gardens. Someone had switched the hi-fi to the speakers there.

Kyle walked outside, music drifting to him from the lanai area. Unable to see it as it was nestled in tall bushes for privacy, he’d have to walk through the gardens to get there. Or go back indoors to enter it via the hallway.

“Too much hassle,” he mumbled and strode across the slate path, veered around flowerbeds and shrubs, and crossed the wooden bridge over a bubbling stream. The landscaper he had hired was doing a good job, but he wasn’t interested in plants right now. He wanted to know who had trespassed on his premises.

The closer he got to the lanai, the louder the music became.

A slight smile curved his lips as he recognized the song. He liked it, but the punk who was listening to it was going to be in serious shit.

He slowed down when he heard someone singing. A woman. What the fuck?

The sweet, tingling voice sang another line, followed by a husky giggle.

Was there a siren in his gardens? His dick twitched and he grinned. He had to be in dire need of a woman if a mere sexy giggle stirred his cock to life. The thought of a woman was nice though. A submissive would be better. A willing, moaning sub, her body writhing under his flogger, or underneath him as he took her.

He was hard now.

“Pathetic,” he said to himself.

The woman—whoever it was—continued singing in her sparkling, sweet voice. Not the right voice for the song—nevertheless, his skin prickled.

For a minute he stood enthralled, staring at the hedge that blocked his view, as if that would magically make it disappear to reveal the singer. Then he walked around the last obstacle with a few decisive steps, only to stop dead in his tracks when he saw her. His jaw dropped.

Slender, an angel face, adorned with flaming, dark red hair that was twisted in a knot on her head. A few wavy strands had slipped free and were brushing against her cheeks. Kyle grinned when he saw the knot was kept up with a pencil. Why bother with a clip when you have pencils? The girl was singing into a paintbrush, the tip gleaming with red paint. Her eyes were closed as she sang her heart out in the paint brush microphone.

It made him smile, and he sized her up, intrigued. The baggy paint-stained T-shirt did nothing to hide the wonderful curves of her breasts. Worn jeans underneath enhanced her figure more than any fancy dress would have done. Long legs, good hips and a full, round ass.

A sudden desire to hold her welled up inside him. Not just hold her—he wanted to kiss her and fondle her high breasts.

He tried to rid himself of the sensation and failed. Her singing drew him even closer.

The song went on with “La-da-dis” and she started to twirl around, her hips swaying, arms up in the air.

Fuck, she is beautiful.

Her movements tugged at the knot and the pencil that held it up started to slip and dropped to the ground. Kyle sucked in a breath as her long, wavy red hair cascaded down and spilled over her back and shoulders. It caught the sunlight and sparks flew off it when she swirled around.

As he stood there, mesmerized and bewitched by the dancing redhead before him, he recalled the siren legend. It spoke of beautiful women who lived on an island surrounded by cliffs and rocks. Dangerous creatures that lured nearby sailors in with their enchanting music and voices until they crashed their boats on the rocks. Kyle could feel his boat crash underneath his feet as he was watching this beguiling creature with her flaming hair.

He held his breath as she stopped twirling, raised her arms up to the skies, threw her head back and sang the last line of the song.

A smile appeared on her face, then she lowered her arms and gaze, and looked straight at him with her green eyes that now flared wide in shock. An “Ooh!” broke from her lips and her face turned as red as the paint on the brush.

He zoomed in on her little round mouth that resembled a perfect rose bud. Thoughts of what he could make her do with that made his dick throb, and he was unable to stop it. He was a Master, but not Master of his cock.

Choosing to ignore his lust, at least for now, Kyle flashed the girl a devastating smile. She glared in turn.

“Who the hell are you and what are you doing here?” Her eyes sprayed fire as she snapped at him. “Are you some kind of perv or something?”

A corner of his mouth turned up.

“I have quite the reputation.” 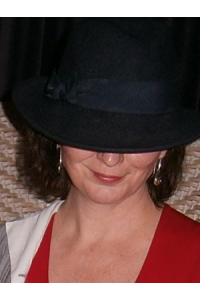 Share what you thought about Boundless Hope and earn reward points.

Other books in the Club Serenity seriesView Series Page