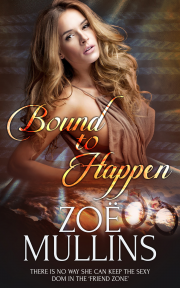 Jaymie knows better than to date her best friend’s brother, but there is no way she can keep the sexy Dom in the ‘friend-zone’.

You don’t date your best friend’s brother. At least not without prior permission from said friend.

Jaymie left Port Ellis for the big city, but she remained a townie at heart. After pinching pennies and clipping coupons, she and her best friend Melissa have enough cash to move home and open The Mudhouse Café. But where there is Mel, there is her sexy older brother Maxwell, who Jaymie has been crushing on since high school.

When Jaymie discovers Maxwell is Master M, the online Dom she’s been chatting with for months, her first thought is ‘yippee’. Then reality hits. She can’t risk her friendship with Mel just to date Maxwell. She should keep him in the friend-zone but she is destined to be in his bed and under his kinky control.

Maxwell’s divorce offers him a new beginning in his hometown and the freedom to explore what it means to be a Dom. He never guessed his online submissive, Jay, was his little sister’s best friend. She is almost like family and she should be off limits. But he’s done denying what he wants, and what he wants right now is Jaymie in his bed, preferably tied to each corner.

It may have taken them years to get to this point, but it was always bound to happen.

The line at The Mudhouse was out the door. For the first time since Jaymie and her best friend had opened the little café six months ago, she was convinced it was going to be a hit. It didn’t hurt that it was crazy-hot out and they were offering large iced coffees for only two dollars a cup.

The crowds were larger on the weekend when the city people from Toronto drove up to their cottages on the lake. Even though she had studied in Toronto and forced herself to work there for a few years, she would always be a townie and proud of it. She hated the city, hated the late hours she’d put in at the magazine, resented the commute from downtown to the suburbs where she’d lived with another graphic designer and two additional roommates.

She’d been biding her time, skipping the parties and the clubs and saving her pennies until she could move home to Port Ellis. That she’d opened a coffee shop and bakery was entirely an accident of fate. It had been her best friend’s idea. Mel’d had the know-how and Jaymie’d had the capital. After finding what Mel called the perfect location, it had all fallen into place with ease.

The Mudhouse was located on Founders Street, the town’s main road. The shop itself was, to put it plainly, a hole in the wall—or maybe a closet. The coffee bar and bakery case were on one side with a row of tables against the other wall. The front of the café was also wide open to the sidewalk, with doors that could be retracted for the summer. What had convinced Jaymie that the location would work was the large deck off the back. It was the width of their shop and half of the florist’s next door and had direct access to the boardwalk.

“You’ve done a good job at reinventing yourself here,” Mel said, passing her a cup of iced tea.

“You mean co-owning a café when I neither bake nor drink coffee?”

“Ssh, we aren’t telling the townsfolk about that. We’ll lose the true coffee aficionados if they discover you scorn them.”

“I don’t scorn them or the coffee,” she insisted, sipping her mango-pomegranate iced tea. “I just don’t worship at the altar of the bean.” They served a large selection of fair trade organic coffees, but Jaymie had made sure they also had the largest tea selection in Port Ellis.

“You don’t know what you’re missing.” Mel took a large gulp of her iced coffee.

They leaned against the back railing, watching as their well-trained staff moved people through the line quickly. Their pastries were all homemade. That was Mel’s passion, and while it would be better if they had a commercial kitchen on the premises, her partner seemed content to bake at home. Jaymie hoped they might one day be able to take over the florist shop next door and turn it into the kitchen of Mel’s dreams, but that was a long way down the road.

As director of finance, Jaymie was well aware of their fiscal realities. She also handled their human resources and marketing needs—all roles that did not require her to get up at the crack of dawn. She was not a morning lark.

“So Max keeps telling me.” Jaymie smiled. Like his sister, Maxwell loved his coffee.

Mel sighed. “I am so excited that you and Max are dating.”

“I don’t know that we’re dating.” It sounded so juvenile—dating. She wouldn’t go so far as to say they were serious, but what they had wasn’t kid stuff. “We are friends with some benefits.”

“Whatev.” Mel waved her hand. “You were meant to be together. I’ve known that since high school. He looks happier than he has in a long time.”

“Don’t get your hopes up, okay?” Jay pleaded. “I don’t want it to get weird. He’s your sibling, and though I’ve known him my whole life, he’s always been ‘Mel’s big brother’.”

“It won’t get weird.” Mel shook her head. “Why would it get weird?”

“If it doesn’t work out or turn into what you hope it will. We’re just seeing each other.”

Seeing each other. That was a good description and it was more than she’d ever expected from her online Dom, Master M. But that was before she’d discovered that her Internet lover was her hometown veterinarian—the guy who used to pull her pigtails and snap her bra strap.

Maybe she shouldn’t have been that surprised. They’d met in a chat room on Fetlife for people from Western Ontario. They’d talked about how much they loved cottaging and Lake Huron, because it wasn’t all dick pics and pussy portraits online. She liked him and she liked exploring where that could lead now that they lived in the same town.

But they had to be careful—not because they were worried someone would find out what they got up to behind closed doors, but so as not to get everyone’s hopes up that they were a ‘couple’. Neither of them had a good track record with relationships.

Max had married his high school sweetheart as soon as he’d finished university. It hadn’t lasted. He’d told his family it had been the stress of opening his own practice. He had never been around, and when he had been, he’d been distracted. They’d grown apart.

Jaymie knew the truth. What he’d wanted out of a relationship, especially sexually, had not been something Shawna could offer. It seemed strange to her that after movies like Fifty Shades, there could still be people who thought thong panties and doing it in the living room was ‘out there’.

“I don’t care what you call it,” Mel continued. “Shawna was a doll and we loved her, but they were too different from the very beginning. She was a mouse and he needs a feline.”

“Excuse me?” Jaymie nearly spat out her tea. That was the first time Mel had even mentioned Shawna.

“You know what I mean,” Mel elbowed her. “He needs someone who will challenge him—someone with claws. You weren’t the terror of Terence Ellis High for no reason.”

“You need to switch to decaf,” Jaymie told her, but she didn’t argue that she had always been a little forthright. Okay…opinionated and arrogant. It was her defense mechanism for being an introvert in an extrovert’s world. She’d learned better coping mechanisms over the years.

Jaymie finished the last of her iced tea before continuing. “I need to take the deposit to the bank and get change.”

Mel frowned, but she followed Jaymie into the shop. “I need to restock the bakery display. I am going to have to start making more of the chocolate energy bars. Those are a hit.”

“It’s a good position for us to be in.” Jaymie had cute little ‘Sold Out’ placeholders made to put in the case when they ran out of something so that customers knew what they had missed. “We are actually making a go of this.”

“I never doubted it,” Mel sing-songed as she tied on her apron. “Say hi to my brother for me.”

Jaymie rolled her eyes and shoved the deposit bag in her purse, but she didn’t dispute her friend’s assertion. There was a good chance she’d stop in at the vet clinic on her way back from the bank. Maybe. If the line at the bank isn’t long, she bargained with herself.

A prolific writer, even in elementary school, she was jotting down poems and stories whenever she had the chance - usually during math class.

After many years of working in corporate communications, Zoë decided in 2015 it was time to focus her energy on the kind of writing she loved – hot romances with strong, alpha heroes and quirky, independent heroines.

Zoë’s husband of nearly 20 years threw his full support behind that dream and loves to tell people his wife is a romance author. They live in Atlantic Canada with their two crazy collies. When not at her computer, you will find Zoë chasing after her muddy dogs, working in the garden or helping to renovate their money-pit of a house.

Share what you thought about Bound to Happen and earn reward points.