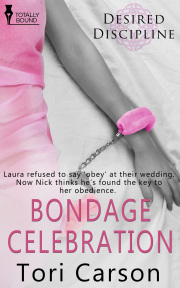 Book 2 in the Desired Discipline series

Laura refused to say ‘obey’ at their wedding. Now Nick thinks he’s found the key to her obedience. Will Laura fall into line or rebel against his unfair sex-tactics?

Nick has tasted Laura’s submission and can’t get enough. Now he wants his headstrong, stubborn wife collared once and for all. When a disgruntled ex-employee sets Laura in his sights, the stakes become deadly. Nick must bring Laura to heel before it’s too late.

Laura is both enchanted and repulsed by the platinum and diamond slave collar that Nick is determined she will wear permanently. While Laura loves and gladly accepts his domination in the bedroom, he demands more. Nick will stop at nothing until he owns her body and soul.

Laura fears losing her independence, but one incredible orgasm at a time, Nick is drawing her further into his silky web of bondage and dominance.

After Laura is attacked, she learns there is more to being a good submissive than simple obedience. If they are going to find their happily ever after, Laura must be strong enough to battle both Nick’s demons and her own.

Laura wondered if the breakfast nook was the proper place to discuss building a bondage playroom. It felt so wrong to talk about a rope station at the table where their kids used to eat their sugary cereal before tearing off to school. But of course, their kids were now adults with lives of their own.

“With Frank coming over tonight to discuss the renovations to the basement, we need to make sure we’re on the same page. Today, while you’re at work, I want you to think about what we should include in both the floor plan and the equipment.”

Nick, her husband, didn’t seem to have any trouble discussing sex toys over breakfast. Maybe she needed to lighten up. It wasn’t like he was bending her over the table and eating her for breakfast. Although she had to admit the idea held a certain naughty appeal, it was a little too brazen for her to suggest it. She remembered during their anniversary getaway he’d done just that.

Laura felt Nick’s thumb and index finger on her chin nudging her to look at him. “I was speaking to you, Laura.”

“Sorry. I zoned out for a moment.” She couldn’t help it if she kept thinking about sex. He was just talking about tying her up for heaven’s sake.

“What were you thinking about?” Nick’s tone was sharp.

Her face heated. Damn it. Whenever Nick asked her pointed questions like that, her mind went blank. The only response left floating around her suddenly vacant mind was the truth. The pure embarrassing truth. “I was remembering what we did on the table at the hotel a couple of weeks ago.”

Nick looked amused. “Refresh my memory. What in particular drew your attention?”

He was expecting her to wimp out and use vague terms. He knew she had a hard time discussing sex, but his smirk riled her a bit.

Laura accepted his unspoken challenge, “You fucked my pussy hard and rough just the way I like it, then you left me hanging until we’d finished going over our hard and soft limits contract.” She couldn’t believe she’d just said that. From Nick’s shocked expression he couldn’t either.

To his credit, he recovered quickly. “Yes, I got you aroused then kept you there on purpose. In addition to loosening your tongue, keeping you hot and delaying your climax significantly increases the intensity of your orgasms. Not to mention, it’s a major turn on for me. Deciding when you come is one of the many perks of being your Dom.”

Laura remembered the orgasm she’d had later that evening. She’d never felt anything like it before. Since they’d embraced their Dominant/submissive relationship, Nick had trained her body to crave his touch. She had to earn every climax, but she had absolutely no complaints. He knew exactly how to bring her the utmost pleasure. “Is sending me to work with wet panties part of your Master plan?”

“If we were following my Master plan, you’d never go to work again. You’d stay home and be my love slave twenty-four/seven.”

She thought he was only slightly kidding. They’d discussed this before. He did want their D/s roles extended beyond their sex play, but he didn’t expect her to give up her career. He said he was proud of her work and she believed him. “Be careful what you wish for. If the Feds don’t approve this merger soon, I might just surprise you by taking you up on your offer.”

“Feel free to surprise me like that anytime you wish.” Nick was silent for a moment, he seemed to want to tell her something.

She waited patiently even though she should have left for work half an hour ago.

“Speaking of surprises, I planned one for you today. It’ll arrive around one p.m. at your office. Don’t let it mess with your head. I don’t expect you to give up your career. I know what your job means to you.”

Laura sat there staring at Nick. He looked nervous and apprehensive. Nick was never unsure of himself, that, more than anything else worried her. She had a sneaky suspicion she knew what he had planned and she hoped she was wrong. Ignoring the sense of dread in the pit of her stomach, she plastered a smile on her face. “I can’t wait.”

At one o’clock sharp, Jessica buzzed Laura’s office and let her know a courier needed her personal signature. Laura signed for the package, knowing she was in over her head.

Bringing the entire bag into her office, Laura placed it on the edge of her desk. For nearly an hour she let it sit there taunting her. Finally she opened the bag and pulled out a white, gift wrapped box with a scarlet red ribbon and bow. Looking at the box she could guess what she’d find inside. Her heart pounded too fast. She ran her fingers along the bow unable to bring herself to pull the ribbon’s end. Once she opened it, there’d be no going back.

Maybe she was wrong. Maybe it was just a regular necklace or bracelet. Maybe pigs could fly too. Damn it! She’d never been a coward before, why was this scaring the hell out of her? Then again, it wasn’t everyday a girl was a given a slave collar. Her hand trembled as she grabbed the offending bow and pulled. Halfway there.

Nope, she couldn’t do it. Laura pushed her chair away from her desk and escaped to the windows forming the east wall of her office. She longed to be outside, to feel the wind blow through her hair.  There wasn’t enough air in the room. She struggled to keep her breathing slow and even.

Pacing back and forth in front of the window, she acknowledged there was nothing wrong with the air, she was having a panic attack. Had it come to this? Laura Branson, ball-breaker of the boardroom, afraid to open a damned box? Drama queen behavior was not her normal style. She took a deep breath and regained her composure.

Returning to her desk, with her chin held high, she willed her hands to stay steady. Laura turned the box over and slid her perfectly manicured fingernail under the fold. A tug or two and the crisp, white pleated paper fell away leaving an intimidating red box with delicate, gold scroll staring up at her.

Her head felt like it was in a vice, each beat of her heart ricocheted in her skull. She looked at the window longingly. No more running. She needed to put on her big girl panties and take care of business. Not opening the damned box wouldn’t change what was inside. It wouldn’t change Nick’s expectations either.

Before she could chicken-out, she pushed the lid open. It was both a nightmare and a fantasy come true. She gasped and covered her mouth with her hand at the same time. It was beautiful. There was no denying that. Her hand, of its own design, reached out to touch the platinum and diamond clad collar. In mid-air she stopped and pulled her fingernail to her teeth, biting the edge. Her emotions ran the gamut.

What the hell is that? In the middle of the box lay an instrument looking oddly like a miniature golf club. At first she couldn’t figure out what it was for. Then she noticed the collar didn’t have a traditional clasp, just a tiny indention that matched the short end of the fastening tool.

Oh. My. God. Once put on, it couldn’t be removed without that special tool. She stood again and paced back and forth in front of the window. Laura had no idea how much time had passed, but her aching feet inside those four inch heeled pumps told her she’d better get her thoughts together quickly. At the far end of the wall, she leaned against the glass and stared at the box.

The diamonds and platinum glinting in the light were both seductive and abhorrent at the same time.

Could she make this commitment? Was it such a horrendous thing Nick was asking of her? Mind blowing orgasms, physical and emotional attention, sexual excitement that only a few weeks earlier she hadn’t known was possible, all from a man she’d loved for her entire adult life. But at what price?

She loved and trusted Nick. So why was it such a big deal to wear his collar? She proudly wore his wedding ring. Was a collar such a different commitment? Then again, she could take her ring off if she chose too. It didn’t take a special tool to remove it.

While that was frightening, she understood it was more what the collar meant than the actual physical attachment. Relinquishing control frankly scared the fuck out of her. As Nick’s wife she didn’t have to do a damn thing he said, as his collared submissive, she’d be expected to obey his commands.

After a few deep, calming breaths she returned to her desk and rummaged around inside the courier bag. She knew Nick. There had to be a card. Nick always made the most beautiful cards. Before she opened it, she grabbed a tissue knowing the waterworks weren’t far away.

Share what you thought about Bondage Celebration and earn reward points.

Why do you love your stories to be so scorching hot?

Subtlety has its place in the world, but my characters feel a burning passion for each other that doesn’t lend itself to veiled innuendos. Besides, I’m about as subtle as a bulldozer; it would be contrary to my nature.