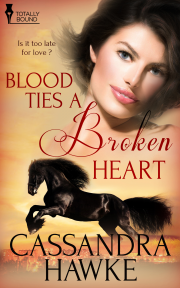 When Ashford St. Clair takes the rap for his sister’s horse doping, he loses his true love, Rylee O’Shaunessy. Is it too late for love when he finally admits his mistake?

When Rylee returns to Adelaide to take over her godmother’s stables, seeing Ashford St. Clair brings back memories of past events—when he sacrificed a promising equestrian career and alienated Rylee in the process.

Ash is determined to win Rylee back and they reach an uneasy compromise when their passion for each other is reignited. But the deeds of the past still haunt the present, threatening their relationship. An old enemy returns to cause trouble for Rylee—Ash’s sister, Arden—the one who brought about Ash’s downfall in the first place. She makes it clear that there’s no room for Rylee in Ash’s life and she’ll do anything she can to make sure that the lovers remain apart.

Will Rylee come to terms with the mistakes she and Ash made in the past and learn to love and trust each other again?

Reader Advisory: This book contains references to past violence for one of the main characters.

The white canvas awning put up by the funeral director did nothing to cut the searing heat of the summer sun as Rylee stood silently by the hole in the ground that would soon hold her godmother’s coffin. Her heart ached with grief for the woman she considered her second mum. They had lived on opposite sides of the country for the last ten years, but distance had done nothing to weaken their closeness. She clenched her brother’s sweaty hand in a tight grip, taking what little comfort she could from the contact. A damp band formed where her little black hat was crushed onto the damp tendrils of her dark wayward curls and perspiration trickled between her breasts, making her feel sticky and uncomfortable.

Her high heels sank into the green cushion of buffalo grass, tightening the stretch on her calves and making it difficult to keep her balance. She stared with desperate concentration at the rosewood coffin balanced above the gaping cavern of earth. The one single stunning pink rose wreath that decorated it was already wilting in the vicious sting of the sun fired by the forty-degree day. She wished the torture over, as her tears dried on her cheeks. The priest droned on, but Rylee barely heard the ritual words that were supposed to provide comfort and respect. Her thoughts were filled with how her beloved Aunt Aileen had died of a heart attack, alone, amongst her horses, as she tried to maintain her once thriving business. If it hadn’t been for the St. Clair siblings she would have been here and the stables would have been successful.

The scent of toasting eucalyptus tickled at her nostrils and she took a deep breath of burning summer air filled with the scent of gums, the sea and the roses and knew she was home. The priest intoned the Lord’s Prayer and was echoed by the mourners. Rylee glanced from under her eyelashes to examine who had attended this final farewell. The mourners made a small gathering—a few strangers, friends of Aileen Jones, and a half dozen well-known faces from the equestrian fraternity. Rylee sighed, such a sad end to endure for a special lady.

She halted her scan of the gathered mourners. He stood at the back of the crowd, different, but the same. She was attracted to, and yet repulsed by, the familiarity of his features. A barrage of emotion slammed into her chest, clenching her heart in a vice of anger entwined with unrequited passion. Only Regan’s relentless grip on her arm ensured she stayed upright as her knees buckled under the unexpectedness of his sudden appearance. Her throat, already dry and rasping from grief, now burned with sandpaper dryness as she tried to swallow. She stared at him, mapping every contour of his beloved face, the tinge of gray at the temples, the new lines around his eyes. She wanted desperately to reach out and touch him, to feel the smoothness of his tanned skin under her fingertips, her body sizzling inside with unbridled sexual need. In her mind, she heard his voice, smelt his scent, and remembered the taste of his mouth on hers. Her chest clamped tight against the sobs that threatened to choke her.

A whimper of agonized misery escaped from between tightly compressed lips, and Regan squeezed her hand, thinking to comfort her in her grief. Beyond responding, she clutched frantically to the last threads of composure as she stared silently at him.

Ashford St. Clair, the love of her life, the destroyer of her dreams. Her beloved, who had turned his back on their love when he had very publicly put his sister before Rylee in a nasty tangle of horse doping, misguided loyalty and lies.

Then he was gone, farther back in the gathered mourners. She searched the unfamiliar faces surrounding her with a despairing need to find him, to catch another glimpse of the man she loved. The urge to break away and push through those congregated at the graveside screamed at her, but she held still, for Ashford St. Clair could never be part of her life and she would never disrespect her godmother in such a way at the very last moment of farewell.

As the priest conducted the final rites, Rylee acquiesced to Regan’s gentle urging to walk forward and scoop up a handful of the red soil offered and sprinkle it on the coffin. Frozen in the moment of seeing him, Rylee robotically went through the motions of saying her personal goodbye, thanking the mourners and speaking to all who came for refreshments back in the chapel. She anxiously scanned the crowd, but he had gone.

The man she had fallen in love with ten years ago—Ashford St. Clair. The man who had done such wrong that she had fled across the country to the bosom of her family, knowing that single act made him forbidden to her. It was inevitable that she would see him now she had returned home, but did it have to be so soon, so unexpectedly and cause such burning anguish? She had fled after the incident, taking her smashed heart with her in the hope that it would heal. She still yearned for him, her feelings just as intense, painful and unrequited as they had been so long ago.

She would never be able to forget the sight of Ashford St. Clair standing by his sister’s horse with an empty syringe in his hand days before an important three-day event in which she would be competing. The reverberation down her spine from the terrible roar that had burst from her godmother still echoed in her ears and the flushed, guilty expression on his handsome face while he had tried to conceal what he had in his hand remained clear in her mind as if it had only happened yesterday. When she had seen his sister Arden skulking in the shadows, Rylee had stayed silent, despite knowing immediately that Arden was to blame. The love she had for Ash had quivered under the resulting scandal but not died, even when she had been forced to cut all ties with him lest she be implicated and lose her standing in the equestrian world.

The following month she and Arden had fought it out in the eventing arena with Arden driving her horse, Lord of the Manor, unmercifully over the cross-country course. Her burning ambition to win had ended with a nasty fall that injured Arden and left Lord of the Manor with a broken leg that had cost him his life. Rylee had taken first place, but she’d lost the desire to compete that day and had sunk into a deep depression. At her godmother’s encouragement, she had fled to Tasmania in the hope she would forget Ashford and heal from the betrayal of their love.

Share what you thought about Blood Ties a Broken Heart PRINT and earn reward points.