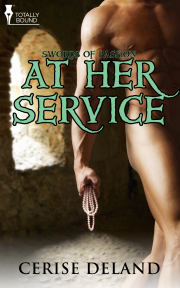 The one man Elise Dumond has always craved is the one man she should not have in her bed - or in her heart.

Elise Dumond has always done her duty to her aging husband. But when the lovely Countess learns her dying spouse has paid a bounty to her childhood friend to father a child with her, Elise trembles at the prospect of being possessed by the famous knight who is now a legendary lover.

Simon de la Poer is determined to claim Elise in all the imaginative ways he has yearned for these past ten years. As he teaches her the joys of exotic pleasure, she revels in their passion. Their rekindled love burns fast and bright, inciting their enemies to try to tear them apart with lies—and murder.

What's a gal to do to if she lives deep in the heart of Texas, travels often everywhere, and adores Paris, Florence, London, Tokyo and all points east and west?

Visit her website for info on all her books.

Go to her blog for headline news, ~ and email her at cerise.deland@ymail.com too! You can also follow Cerise on twitter

I love the story of Elise and Simon, my other favorite part is that it’s a medieval story. Elise is married, her aging husband is on his deathbed and has asked Simon a very special favor, to father a...

The heat between the two were amazingly orgasmic. His naughty words so unlike a gentleman of the time era and that was a great touch. Then the plot thickens, untrusting servants, murder, and a...

Share what you thought about At Her Service and earn reward points.

I've written love scenes for a living all my professional life. That's nearly four decades…and totals more love scenes (and many more love affairs) than this lady has had. Ever.