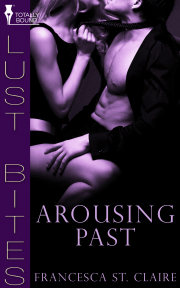 Joe Bradley was the love—and heartbreak—of her life. But that was all in the past. Now he's back claiming a place in her heart that he no longer deserves.

Eight years later, Melissa has moved on and made a life for herself. Then Joe re-enters her life, claiming a place in her heart that he has no right to expect. But how is she going to cope with the constant reminder of the past when he's now her new boss?

From the moment they meet again Melissa realises the old attraction is still there, but she's determined not to give in, even if it means quitting her job. Her will power is put to the test when she's forced to stay at the hotel over the weekend and Joe promptly lures her into joining him for dinner. When the conversation turns intimate, Melissa leaves the table and runs back to her room in tears. Joe follows her and Melissa reveals a secret from the past.

Joe does not take the news well. But after eight years, is there enough left between them for a second chance?

Today she would see him again…the first time in eight years.

Eight years. And yet she remembered the last time they were together as vividly as if it were yesterday.

"The new boss is here…" Nicole announced as she rushed into Melissa’s office, interrupting her thoughts. "Are you going to the welcome party?" Nicole asked, taking a chair across from Melissa’s desk.

What choice did she have? As department head she had an obligation towards her future boss. Besides, her absence would be noticed and excuses would have to be thought up. Such behaviour would be too unprofessional, and all for nothing. In the end, she’d still have to meet him.

After the initial shock that followed the announcement of Joe Bradley as the new CEO of her hotel, she’d considered quitting her job. Reason, pride and curiosity had stopped her from acting cowardly. She’d tackle this new challenge with the same professional finesse she’d used through every hurdle of her life.

Not every hurdle. Well, no, but she would overcome this new challenge just fine. Besides, Joe Bradley meant nothing to her anymore.

"I asked if you’re going to the welcome party."

"I thought you had a date."

"Not until later." After I’ve met Joe Bradley.

"Good. We’ll go together. Two hot babes in a sea of suits and uniforms are bound to impress the hot, single and"—she wiggled her eyebrows humorously—"available new boss."

Melissa almost snorted. Impress Joe Bradley, indeed, fat chance of that happening. From what she’d heard, Joe Bradley didn’t get impressed easily these days. In or out of the boardroom… His reputation as a tough, demanding manager was only upstaged by the multitude of partners he dated—each new woman outdoing the previous one both in looks and glamour. Instinctively, she combed her fingers through her blonde hair. Stop! This wasn’t a date and she wasn’t going to the reception because of Joe Bradley.

This was strictly business only. He was reputed to be a brilliant professional and she was looking forward to working with someone who she could admire, even if the admiration was limited to one level. Sure!

Melissa examined her ash-grey pencil skirt and double-breasted short jacket, matched with a pair of pumps and a silk white top, and decided she had the precise appearance she wanted to portray—modern, elegant and professional. He surely couldn’t fault her clothes.

There had been a time when Joe Bradley had admired and complimented her choice of clothes and accessories. And there had also been a time when she’d dressed to please him. The thought of him admiring her physique brought on an old forgotten tightness in her chest. I must ignore him! He’s not important to me now. It doesn’t matter what he thinks of me. Right! If she kept telling herself that her agitation was nothing to concern herself with, she’d be okay. Joe Bradley is no longer important to me on a personal level. Good. All she had to do now was keep reminding herself of that and she’d be fine.

"These clothes will have to do. They’re all I’ve got with me."

Nicole eyed her with puckered lips and assertive eyes. "And as always, impeccable taste."

"Thank you. I’ll bear this compliment in mind when you next want me to try on leopard tights."

Nicole laughed, a rich, throaty gurgle that always made those listening smile. "Touché."

"Will you come by my office?"

"Of course! Wouldn’t miss our grand entrance for the world," Melissa teased, but the minute Nicole was out of sight her self-assurance crumbled and she slumped her shoulders.

Why did Joe Bradley have to come to her hotel and disturb her well-earned peace of mind? Why?

Francesca St. Claire was born on a ship in the middle of the Indian Ocean. She believes this unique event set the scene for an exciting life of romance and adventure, basic ingredients for her sexy short stories.

After experiencing life in six different countries, she's currently living in southern Europe with her husband, their three daughters, and a thirteen year old cocker spaniel.

Olga Korbut (the famous Olympic gymnast from the seventies) once said she never competed for the medals but for the adoration of the crowds.

With her third published title, Francesca also hopes to captivate and excite her readers with her stories, and to have their support for years to come.

Quick and sexy was Francesca St. Claire's Arousing Past...The sex was stimulating and well written. Melissa and Joe ignited the pages as they came together. Arousing Past demonstrated that life...

A good read and Arousing ... look forward to the next one!

Share what you thought about Arousing Past and earn reward points.