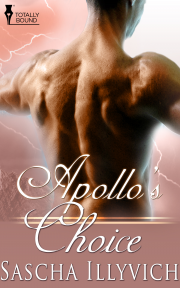 After gaining in popularity to the point of causing the other gods fear on Olympus, Apollo is banished to a different time and world by Hera. Cursed to remain in 1990's in the body of a bass player for an up and coming grunge band, Apollo must figure out a way to return to Ancient Greece and restore his powers.

Only a beautiful redhead crosses his path and forces him to choose between his former home and his heart.

Reader Advisory: This story was released as part of the Nectar of the Gods Anthology by Total-E-Bound.

Apollo looked at his temple. Marble stone columns stood tall with a slight influence from Thrace architecture. He knew it was odd to mix cultures, but a party was a party. And Mother Nature shared her bounty with multiple species, right?

The mere splendour of his temple was a sight to behold. Ornate purple cloths hung on the walls, framing exquisite tapestries woven with the finest of silks. Gold adorned everything from goblets to his throne. A fountain stood in the middle of an open space. The statue of Apollo playing his lyre while surrounded by beautiful women reminded him of his love of music and sex. Many of his followers had worshipped at this temple, drinking from this very fountain. Hell, last night’s party with Dionysus had ended with an orgy of him and six beautiful women who’d had a little too much of the fountain’s gifts.

What a wonderful way to forget an affair that had gone awry.

Now, he lay across a chair, legs thrown over the sides with a drink in hand. His blond hair fell over his face, hiding his eyes and the smile he still wore from last night.

Sighing, he remembered this one buxom redhead who had offered herself completely to him. He took her in every imaginable position, let her do anything to him she wanted. They’d both come several times and still, after several hours, he wasn’t satisfied. She, of course, was out cold. Tired, being human and all.

Being the fertility god as well as god of wine had certain advantages. “Who wants to be god of war when we can drink and fuck for eternity?” Apollo laughed aloud.

He’d decided to send a message to his followers that another festival was to be held in his honour this evening. Zeus and the other gods be damned, but Apollo was really becoming accustomed to having the masses worship him. Apollo was the god of Nature, of wine. The two were related. From nature came grapes. From grapes came wine. From wine came indulgence.

He scoffed at the mere thought that Zeus had even the kindest thought for one of his sons, let alone one who actually served a purpose. It seemed that both humans and gods alike shared the problem of discarding unwanted children.

Those weren’t the worries of Apollo though. His biggest concern was trying to figure out just how many women he could fuck in one night. It didn’t matter to him who, as long as fun was had by all.

Hell, he even wondered if some of the other gods would show themselves tonight. To see Hera drunk and dancing could be a total mess, or it could be great fun. He was betting on the latter.

He knew his little redhead would be present tonight. She’d been so intoxicated from his love and wine that he sent her home with Hermes, the messenger god, just to make sure she arrived home safely.

He yawned. A nap was in order. Even the gods had to rest from time to time.

A Reviewer Top Pick! Sascha Illyvich's latest release, Apollo's Choice is an entertaining and unique spin on a classical Greek icon...I really enjoyed this book and am definitely adding this book to...

Sascha Illyvich paints an unflattering and yet probably quite accurate picture of the god of wine and sex...Not to mention the sex scenes are outstandingly hot, but what else should one expect when...

Share what you thought about Apollo's Choice and earn reward points.