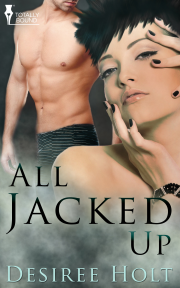 On his fortieth birthday Jack Manning had his own private pity party until a pixie showed up and he was soon "all jacked up".

Jack Manning had carried an image with him all of his adult life of the woman he planned to marry. She'd be every man's ideal-slender with masses of blonde curls and sapphire blue eyes.

Darcy O'Connor has been the odd-girl-out all her life. Barely five feet tall, she wears outrageous clothes, styles her short black hair in spikes and has developed a smart mouth to cover her insecurities.

When she walks into Eli's, the favoured neighbourhood hangout, and meets Jack on his birthday, it's like a collision of the planets. Instantly they rub each other the wrong way. But very hot sex keeps drawing them together.

Will they burn each other out before they realise what their feelings really are?

I loved this charming story of two very different people who need just what the other has in order to get on with their own lives and personal evolution...It was superbly written, with strong and compelling...

I loved this book. It hit a note with me, as I am getting older, and realized that what I am looking for, may not be what I need or what does it for me.. I loved the characters, the fact they are not...

Share what you thought about All Jacked Up and earn reward points.