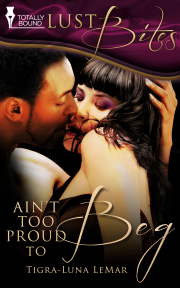 Ain't Too Proud to Beg

Angel 'Cora' Moreno visits The Garden to watch. But watching turns into craving when she lays eyes on the sexy and elusive DOM, Hunter. After a few words of caution from her best friend, Angel decides to take what she wants—a rough toss in the hay with Hunter. But when she finally gets up the courage to approach him, he orders her on her knees and all she can do is obey. Then they meet outside the club in the most unlikely of places and her world is about to take a spin.

Jackson 'Hunter' Morgan has been into the Dom/sub lifestyle for as long as he can remember—but he's not a hardcore fan. When Angel walks over to him and demands to be his for the night, Jackson knows there's something about the plus-size beauty before him because she tests his control and burns his body. He knows he cannot resist her and will do anything to make her his—completely.

A jamaican by birth, Tigra-Luna lives in Toronto. She visits Jamaica regularly, especially when it's minus 35 with a windchill outside in Toronto. In her spare time she loves movies, travelling, trying to sing in the shower and watching Giants baseball and UFC.

Share what you thought about Ain't Too Proud to Beg and earn reward points.