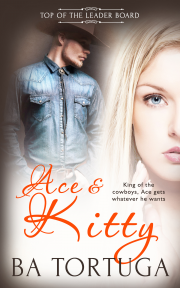 Book 1 in the Top of the Leader Board series

King of the cowboys, Ace gets whatever what he wants. Kitty is strong, independent, and madly in love, but will they go all the way?

Ace is a record-breaking all-around champion bull rider. He’s used to being the boss, and he knows what he wants. When he meets reporter Kitty at a black tie event, he knows he wants her, and he’s hoping she feels the same about him.

Kitty loves Ace’s strength, and his old-fashioned gentlemanly ways, which are rare in her world. She’s used to war zones and petty tyrants. Ace wants to protect her, and she’s willing to let him. To a point. She still has a job to do, though, and when danger strikes too close to home, Ace comes to the rescue. Will Ace be able to keep Kitty safe, and by his side?

Not one of the cowboys who saw him as the face of a major bull riding league would believe it, but Ace Porter hated celebrity-filled network parties with the fiery burning heat of a thousand suns. He hated the glitter and the fake smiles and the fact that he was the only one not wearing a suit.

Of course, he hated the suits more. They didn’t go with his cowboy hat or scars.

He stuck one hand into the back pocket of his jeans, the other holding the beer he’d wheedled out of the bartender. It wasn’t Bud Light, but it would do. The entire fucking room was filled with fake shit.

Hell, there were probably fake backsides, built just for kissing.

That idea made him smile, which was a decent thing, because that meant he wasn’t scowling when she came into view. Hoo yeah.

Blonde and lean, without a bit of fake anything showing, the lady moved as if those heels were the most natural things ever. Her hair was piled high, caught with a sparkly deal that caught the light, just like the jewels at her throat and ears. Damn, she was like a firefly or something—all shine and twinkle. Her dress was simple, dark and classy, showing leg, not too much chest, and he took a step closer.

Their gazes met, hooked on each other across the room, and she smiled back at him, eyes actually crinkling at the corners a little.

He hadn’t seen a woman in this town whose face could still move. Ace straightened up, figuring he’d make his way over, see if she wanted to have a drink. Maybe compare wrinkles.

Or even better, compare scars.

Bright blue eyes looked him up and down, giving him as much of a once-over as he’d given her. Whatever she saw in him must have worked, because Ace got another of those approving smiles, then she raised her wineglass—filled with white—and nodded, right before a suit came up, took her elbow, and she rolled her eyes.

There was nothing plastic about her, and Ace shifted from foot to foot, getting a little growly at the guy who monopolized her time.

Those pretty eyes kept returning to him, over and over, and once he could swear he saw her mouth make the words, “Save me.”

Well, now. He was a cowboy, right? He couldn’t deny a damsel in distress. Ace wandered on over, stepping neatly between the man and his prey. “Hey, there. Oh, sorry, man. You mind if I steal the lady for a moment? We were talking earlier and we got interrupted. Didn’t want to miss the rest of that story.”

Before the stuffed suit could reply, Ace had taken the lady’s arm and swept her right off past a group of ladies who might have been from Dallas, the way their hair was jacked to Jesus. One of them caught the suit’s arm when he tried to pursue. Boom. Day saved.

“Oh, you’re very good.” Her laugh was warm, not tittery or anything, just as right as rain. “Thank you. I was getting incredibly frustrated.”

“You looked like it.” He’d been pretty frustrated, too. “Ace.”

“Kitty.” Her hand was slender, long and warm, nails normal, not like claws or studded with diamonds or nothing. “Can I buy you another beer?”

“You can. You have to threaten someone to get it, though.” He’d been there. If it was martinis or white wine, you were safe, but God forbid you ask for a cold brew.

“Not if we find another bar.”

Well, hello there. Wasn’t that refreshing candor, and initiative, as well? Ace approved.

“You as bored as I am?” He took her glass and put it on the tray of a passing waiter along with his beer bottle. “I know a great hole in the wall with a mechanical bull.”

“Honestly?” Her eyes lit up like jewels and shit—he’d always thought that image was some made up deal, but hers were amazing. Genuinely. “I’m so in.”

It wasn’t cold or nothin’, but some of the LA types liked to have a fancy cover-up, and you had to stand and wait for an hour while the coat check feller hunted it down.

“I don’t.” Kitty grinned, winked. “I have everything a girl needs right here.” She patted the shiny leather purse on her shoulder.

“Well, come on, then, before someone else stops us.” He grinned too, feeling like a young cowboy at his first big show—part excited, part nervous. Mostly tickled as a pig in shit.

“Do you have a car here?” She headed for the elevator, pressing the ‘down’ button.

“Me either. Had to be out this way for an event anyway, though.” More than one of the other league officials had accused him of being a control freak, not letting a show go on without his approval.

“How did I guess that you weren’t from here?” She smiled, the words teasing, but not holding a hint of bitch in them.

“Oh, I don’t know. Must be psychic.” He winked. His Texas was hard to miss, from his accent to his boots, which were actually worn in.

She let her eyes go wide. “You know my secret! Everyone else here believes that you’re a surfer from Venice Beach.”

He laughed out loud, glad they were in the elevator because it would have drawn stares. “There you go. And you’re a hick from Oklahoma who can’t drive in cities to save you…”

He gave her face a careful once-over. “Nah. Too many teeth.”

He put a hand on the small of her back to guide her toward the parking garage. He didn’t quite trust them valets. The flashing lights and screaming from the paparazzi wasn’t down here, either. Just a security guard. A great big one. A great big giant one that stood and loomed.

“Mr. Porter. Miss Carpenter. Is everything okay?” the guard asked.

Ace waited until they got into the truck. “LA security is always sort of robotic.”

“They only hire Teamsters in the city.”

“So, where are you from originally?” Ace liked that she had that newscaster voice, really. Smooth and accentless.

“Missouri, right outside of Kansas City. You’re from Texas, yes?”

“I am. I have a place down by Weatherford now, but I’m from West Texas.” Small town, deep West Texas.

“I’ve been in Texas a few times. It’s a vast place. Missouri, not as much.”

“It’s big, yeah.” He steered away from the big hotels and convention areas, heading for the seedier bars.

It said something to him, that she didn’t tense up, didn’t ask where they were going. Hopefully it didn’t say she was stupid.

I found this story beautifully written. It started out like it was going to be just another erotica novel but there was so much more. The author covers everything from long distance rom...

Share what you thought about Ace and Kitty PRINT and earn reward points.