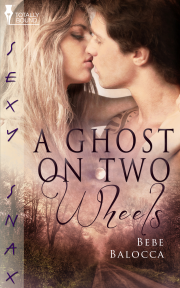 A Ghost on Two Wheels

An accident tore us apart, but I can't live without Michael. I'll find a way to love him, even if it's the death of me…

Ivy and Michael, her tattoo artist boyfriend, share a timeless, passionate love. Both work from home, so their breaks are spent together, making love and going for erotically-charged motorcycle rides through the countryside. They plan to make their bond official with name tattoos over each other's hearts, but fate and a reckless driver bring their world to a crashing halt.

Ivy and Michael learn that sexual pleasure remains after life ends, and that death doesn't stand in the way of true love.

I had been wanting to read this one since it was featured on my site on Halloween. I sat down to read it and even though it was short, was an OH MY GOSH read. Bebe tells you about the love these 2 share...

Share what you thought about A Ghost on Two Wheels and earn reward points.