Raven McAllan talks to us about mistaken identities

Raven McAllan talks to us about mistaken identities in her new release, Taken Identity.

How many have the same job? Probably a few, because let's face it, there's an awful lot of teachers or nurses or retail assistants around. Chances are several of them will be called Fred Smith or Josephine Bloggs. (I'm sure there are statistics somewhere, but I'm not that mathematically mind to be able to sort it out.)

Somewhere along the line it gets a wee bit scary.

This all started simmering in my mind, when one of my children said they'd met an old friend called, for this purpose, Claudia MacDonald. (That wasn't her name but her name was equally unusual.) I immediately asked, "which one?" because strangely in that child's school year there were two girls of the same name, same birthday, and both dark hair and brown eyed. Luckily their similarity ended there, and it was legit.

A few weeks later there was a spate of copycat social media sites, and not just those for celebrities either. Most of these were annoying, silly and people knew them for what they were. But some weren't. They were vindictive.

It got me wondering. How would you cope if someone 'borrowed' you, all of you, and in effect became you without you knowing?

After all, if they knew so much about you that they could 'borrow' your persona successfully, what else had they done? Set up a bank account? Taken out lots of credit cards and not paid them? Would you find debt collectors on your doorstep ready to take the T.V., the car or the cat?

Did they as you, you have another husband, kids or a life in the fast, (or slow) lane?

And what on earth would you do when you found out?

My heroine knew exactly what to do. Get it all sorted out and quickly.

Mind you she had a head start. A drop dead gorgeous guy on her door step, looking for her alter ego, and it wasn't to make mad passionate love to her either.

The thought of how someone could in effect be me, or you, or the man on the Clapham Omnibus, i.e. any one of us, fascinates me. Of course in this day and age it's so much easier to find out everything about someone else (even their knicker size and if their preferences is thongs or granny pants), and use that information.

Jules and Grey, my hero and heroine, found themselves in this situation. I was tasked with the challenge of finding out why, and if they could get their own happy ever after and how.

I hope so, but really only you the potential readers can tell me. 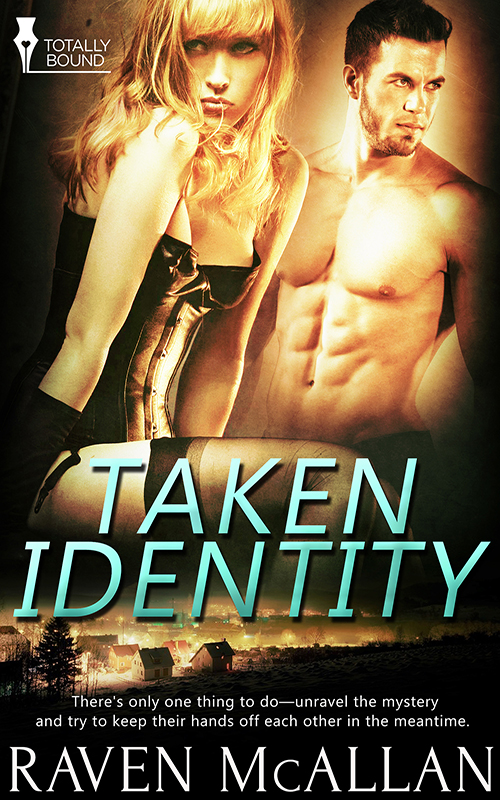 When the devastatingly handsome Gray turns up on her doorstep looking for his wife, and calling said wife by Jules name, Jules wondered briefly if she'd landed in an alternative universe. She knows she's not his wife, and so does he. But apparently someone with her name and history is.

Is it a case of coincidence or did his missing wife 'borrow' Jules' life?

Even though the dominant Gray sends her knickers aflame with just one look, with a missing wife in the equation, Jules knows there's no chance of finding out what else he could achieve.

There's only one thing to do—unravel the mystery and try and keep their hands off each other in the meantime. The first may well prove far easier than the latter.

“As a matter of great interest, how did you find me all of a sudden? I mean, if you’ve been hunting Julia Frayne since she left Gray, why has it taken you this long? I’m on Google.” Their attitude annoyed her. How up yourself do you sound now, Jules? “And Frayne isn’t that common a name. I’m the only one in the local phone book.”

Gray looked somewhat embarrassed. “Yes, well, er… Oh shit. I—we haven’t been looking that long. I mean, for God’s sake, how do you admit the woman you thought was madly in love with you has made a right idiot of you, left you and taken the family jewels?”

Jules and Sean burst out laughing.

“What?” Gray must have realized what he’d said because he coloured and gave a short, self-conscious laugh. “Yeah, well, the way I felt when I found out, you could have said she had. Put me off women for a long time, I can tell you—with the exception of one fiasco I am not going to discuss. Talk about being taken for a ride, twice. However, I have learned my lesson well. No more, never again.” He sat back, folded his arms over his chest and swung his chair on two legs. The action tightened his muscles and drew attention to his body.

“Ah, bless. Build a bridge,” Jules said. Shit I wish I could block out the image of what I think he’d look like naked. It made her mouth dry and her pussy wet. “Hell, where do I start?”

Back to the lava freezing, then. Boy could I warm him up given the chance. Argh no, he’s married, married and not for me—not even if I do have the right name.

“Pardon what?” If he could be short and shirty, then so could she. Probably better, and able to keep it up for longer. Not for nothing had she learned to hold her own against her brother. However, she’d be magnanimous. This time. “I’m sorry. What are you asking my pardon for?”

“Oh, that.” Jules laughed. “Build a bridge. Get over it. Stop feeling sorry for yourself. It’s happened. End of. If anyone should be feeling sorry, it’s me. There’s someone out there using me as them. Getting up to God knows what. Now that is something to worry about. Okay your jewels—all of them—are precious, but presumably, one lot is insured, and the other lot is now in full working order?”

She could see Gray trying hard not to laugh again. “Perhaps you’d like to try them out?”

“Mmm.” She tilted her head to one side, pursed her lips and tapped them with her index finger. “Who knows? Perhaps I would, sometime. When your wife isn’t your wife and isn’t me.”

She’d forgotten Sean. When she remembered his presence, she saw him watching the byplay with interest, until he cleared his throat. Gray snorted.

“Er, before all this bridge and jewellery lark, you said ‘where do I start?’” Sean ignored Gray and spoke directly to Jules. “So, start what?”

“Well, I was trying to be logical. Don’t laugh, you oaf,” she said to Gray, who still sniggered, “or I’ll stop before I do.”

She ignored the muttered, “Oh, that would be a pity.” Gray, she was fast realizing, was nothing like the upper class Rah she had first thought him.

“I thought perhaps we could get an idea of when she became me and might find a clue in my diaries,” Jules explained her thought process. “Long shot, but hey, we’ve bugger all else to go on.”

“It’s not a bad bugger all though. Good thinking.”

She didn’t know who was more surprised, her or Gray, when he pulled her out of her chair and took hold of her shoulders before kissing her hard on the lips. The tingle went all the way down to her—well, she thought hazily as she opened her mouth and took his tongue inside to let it swirl and circle her own—to everywhere, and especially to her pussy. Her thighs were damp, and she daren’t check to see if her arousal showed in the material that covered her mound. It took all her small supply of control not to moan and pull him back in for round two, as he slowly ended the kiss and moved backwards to lean against the table. He seemed as dazed as she was.

Raven lives in Scotland, along with her husband and their two cats—their children having flown the nest—surrounded by beautiful scenery, which inspires a lot of the settings in her books.

She is used to sharing her life with the occasional deer, red squirrel, and lost tourist, to say nothing of the scourge of Scotland—the midge.

A lover of reading, she appreciates the history inside a book, and the chance to peek into the lives of those from years ago. Raven admits that she enjoys the research for her books almost as much as the writing; so much so, that sometimes she realizes she's strayed way past the information she needs to know, and not a paragraph has been added to her WIP.

Her lovely long-suffering husband is learning to love the dust bunnies, work the Aga, and be on stand-by with a glass of wine.

You can find out more about Raven here…

Add to Cart: £0.00
Not Your Average Tuesday
The Vixen