Victoria Blisse talks to us about her busy life as an author of smut!

Some of my most valuable procrastination comes from being part of Smut UK as I get to organise and attend lots of events and chat to other authors, readers and smutty people. Other ways I procrastinate include facebook, twitter and pinterest and if push really comes to shove I’ll have to do housework.

I find inspiration everywhere I go. Many ideas come to my on public transport though I do find a local BDSM club, Club Lash and the Manchester Alternative and Burlesque fair to be very inspiring indeed. Check out my blog for reports on places and things that get my inspirational juices flowing.  I love that my life is full of excitement and fun people to share it with, especially my husband who is with me every step of the way. I’m eternally grateful to him because he started off my erotica writing career by his encouragement. Without him, there would be no Victoria Blisse.

2014 was a challenging year for me, I spent a huge chunk of it very ill indeed and found out eventually that I was gluten intolerant, I’ve had to give up many favourite foods but now I’m much healthier and happier and discovering new favourites all the time. I didn’t write much last year because of the illness but I’ve been making up for it in 2015!

This is the year of being brave. I’ve done so much this year I’d never have contemplated before, I’ve got a new lease of life and am writing more than ever. Big thanks has to go to the amazing, the gorgeous Matt S who has opened up a whole world of new inspiration to me and is now my resident Dom! Check out his Genesis of a Dominant Model posts to see exactly what I mean.

You might think it’s strange that a post about me mentions so many other people and places but I wouldn’t be me without all these amazing influences. I’m eternally grateful that my life is so very blisseful! 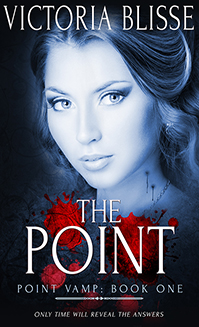 What is The Point? It is the hottest club in town for both Vampires and humans alike. It has a large dance floor and a bar like any other club but once you disappear behind the VIP only door you find out what makes The Point so unique. Sex, blood and lust all behind closed doors and only accessed by the chosen ones.

Now, you become a chosen one and get to see the sexy world behind that door.

Welcome to The Point.

All four books are out now. The first three have been expanded and revised with extra content to delight your eReaders!