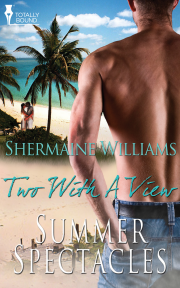 Two with a View

Living opposite one another, neither Natalie or Cyrus can resist spying on the other through their bedroom window. And they both soon find that look, but don't touch is a rule by which they can't abide.

Not long out of a relationship, Natalie is only too happy to maintain a friendship with her neighbour, Cyrus, that benefits them both. The fact that he wants more works to her advantage.

Knowing that he wants her enhances their voyeuristic games, allowing her to control his actions while remaining on the sidelines, merely needing to click her fingers when she wants him. As much as she'd like to, Natalie soon finds that she can't control her feelings, no better than she can control his.

Reader Advisory: This book contains a MMF ménage scene and a brief glimpse of wince-inducing sadomasochism.

The direction the greeting came from wasn’t immediately apparent. Turning to walk onto the empty street, she slowed her pace and looked around. As she finally recognised the black Lexus parked at the corner, a smile curled her lips and she lowered her sunglasses.

She leant down to the open passenger-side window and a soothing current of cool air hit her, contrasting with the hazy heat of the day. The man inside the car was just as cool, a smile on his lips as he leaned towards her. Undeniably handsome, he often had Natalie debating with herself about which of his features she liked best—his ample lips, his perfect Roman nose, his strong jaw highlighted by a lean face.

His hazel eyes were only a little darker than his warm complexion, yet somehow they seemed to stand out. She looked deep into them, the windows that allowed her to read him.

He held her with his steady, sparkling gaze. “I spotted you around the corner. I’d have given you a lift if I’d seen you earlier.”

She shrugged slightly, smiling with gratitude at the awareness that he would go out of his way to help her.

“You can get in now,” he suggested.

The widening of his smile let her know exactly what was on his mind. “Well, I can take you back to mine if that’s easier.”

She might have expected the comment from him, but it still caused a distinct, moist heat to develop between her thighs.

“I’d love to, but I can’t,” she admitted, genuinely regretful.

His smile faltered slightly. “Got a hot date?”

He shook his head.

“I’ve got a lot of work to do, but I might have something for you later.”

Natalie smiled knowingly, briefly raising her eyebrows before putting her sunglasses back on. “Hopefully I’ll see you later.”

Share what you thought about Two with a View and earn reward points.