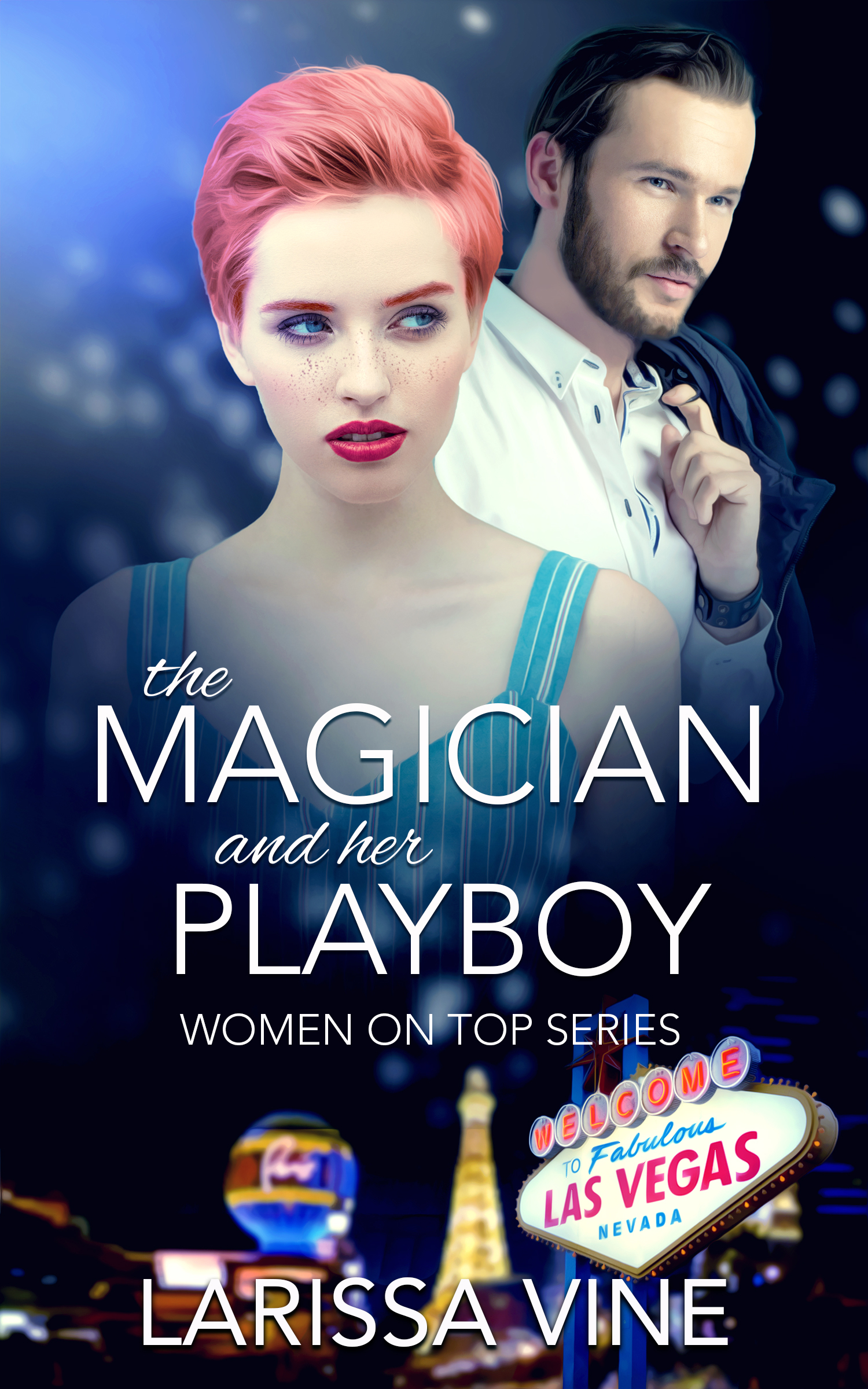 The Magician and her Playboy

Book 2 in the Women on Top series

Believe in the magic of love.

Lydia Greene is beginning to believe that magic is real. One minute, she’s an up-and-coming illusionist scrabbling to make a living and, the next minute, hot billionaire Conner McCullagh offers to take her show to Las Vegas. It’s not like she trusts him. After what happened with her dad, she refuses to believe in any man. Even so, she’s delighted that handsome Conner is giving her a chance at the big time.

Property developer and playboy Conner is facing a test. He has two months to make a failing hotel profitable. If he succeeds, he’ll get to strike out on his own in a new career with his father’s blessing. Conner believes that Lydia’s astounding act will be the solution. Hopefully, she’ll work her magic on the hotel just like she’s working it on him.

In Vegas, Lydia becomes caught up in the excitement of her unfolding romance with Conner. But things aren’t as they appear. The magician who’s helping her to prepare for her show isn’t as well-intended as she first thinks and, suspicious, she turns detective…and discovers an underbelly of darkness beneath Vegas’ glitz.

Conner and Lydia are two people from two different worlds who believe in the magic of love. But if they want their future together to be more than an illusion, they’re going to need more than abracadabra…

Lydia gulped back a breath, hoping it would calm her, then took a step forward out of the wings. Her feet became tangled together and she half ran, half fell onto the stage. Flushing, she turned to face the audience. “Can you please turn up the house lights?” she called to the technician.

Snap. The lights went on, illuminating the crowd. She eyed them from the stage. There were so many of them, the rows stretching back as far as she could see. More faces peered down at her from the balcony. She felt a buzz that so many people had come to watch her.

For the last three months, she’d been touring Canada, moving from city to city. She’d started east in Halifax then moved west to Toronto until she’d finally worked her way back to her home town of Vancouver. And now she stood at the Elysium Theater, where the smell of the greasepaint was stronger, the stage lights hotter. And there were faces, hundreds of faces, watching her, stretching back far and rising up in two levels toward the ceiling.

She cleared her throat then spoke, her voice echoing through her head mic. “For my next trick, I’d like to ask someone from the audience to join me on stage.”

A few hands went up.

More hands went up, a sea of them, from most of the rows.

She cocked her head and made a show of deliberating who to choose, when really it was simple. She always went for a woman. Why risk a dumb-ass man spoiling her routine?

She scanned the front row until she spotted a woman in a purple mohair sweater who had her hand raised. The woman was middle-aged and kindly-looking. Perfect.

Lydia was about call to the woman when she noticed the man next to her. He didn’t seem to be with the woman but with the group of men on the other side of him, who, like him, were also wearing suits. The man’s arms were crossed, his body tense. He was acting as though he didn’t want to be there with every pore of his being, as if he’d come to watch the show under protest.

Lydia called to the woman. “You, madam, in the purple sweater. That’s right, stand up.” She turned to her assistant. “Troy, can you bring this lady onto the st—”

Lydia’s head whipped back to the audience to see who’d spoken. Oh God. It was the bored-looking man in the suit. “I’m afraid you’re too late, Sir.” She labored the word, pouring as much sarcasm into it as she could muster.

She knew his type. He was probably a lawyer or a high-level manager, the sort of person who expected everyone to work around him, who always made sure that he got his own way. Well in this case, he’d missed his chance. He should have acted faster.

But wait. Now the man was leaning toward the lady. He whispered into her ear. The woman smiled.

“Madam? Care to join us?” Lydia’s voice held a hint of desperation.

The lady shook her head and said something that Lydia couldn’t hear. The man stood and strode past the row of seats at the front toward the steps that led to the stage. Lydia swallowed. Things were spiraling, slipping out of her control.

As if in a daze, she watched Troy head down the stairs to collect the man. Usually this worked well. Women loved being escorted by Troy. Lydia had flipped the gender stereotype. Most magicians were male and had a female assistant, a cute-looking gal. Well, she had a cute-looking guy.

Troy—his stage name, while his real name was Tim—was ripped, jacked. When he wasn’t touring with Lydia, he worked as a spin instructor at a gym. He had a sunbed orange tan and his skin shone with baby oil. She had dressed him in the perfect beefcake outfit of a pair of Lycra hot pants—booty shorts that hugged his butt cheeks.

“Hey, buddy. Watch it.” He shrugged off Troy’s hand, as Troy tried to guide him toward her.

There was a dark stain of baby oil near his buttonhole.

Troy led the man up to Lydia. The house lights had dimmed and the audience was watching her, clearly wondering what she’d do next. It took a lot of her willpower not to glare at the man, who was tall and in his early thirties. His hair was so dark that it was a shade off being black. He was handsome, surprisingly so, which for some reason irritated her.

“What’s your name?” she asked.

“Boy, were you in a rush to join me,” she joked. “You must really like magic.”

“Well, I’m here to convert the non-believers,” she said lightly. “And what do you do?”

Someone in the audience booed. Lydia bit back a smile. “Pleased to meet you.”

She held out her hand and he shook it. His palm was warm, the grip perfect. It was the best handshake that a man had given her in ages. It wasn’t metro-sexually limp or finger-crushingly aggressive. She was surprised at how much she liked touching him.

She let go and turned to a small table behind her while trying to ignore Conner, who was as alert as a hawk. She felt on edge. Of course, she and Troy had spent ages rehearsing each illusion, but even still, she could never be totally certain that it would work. Tricks could still go wrong, like some had in the past, especially earlier in her career.

The table held a packet of cigarettes. She picked it up then, in her nerves, she dropped it. Bending down, she scooped up the carton again and tipped out a cigarette, which she lit and passed to Troy, who’d come to stand beside her.

Next, she switched her attention to Conner. “Do you have a bill?”

She half expected him to make some slimeball quip about how women were always tapping him for money, but he didn’t. Then she wondered if he was so rich that he didn’t carry any cash at all, just platinum credit cards.

He reached into the back pocket of his pants and pulled out a wallet, the leather of which looked as soft as buttermilk. After opening it, he drew out the top bill—a U.S. twenty—from the wad, which she took from him.

“Troy,” she said to Troy, “can you pass the cigarette to Conner?”

She caught a waft of smoke as Troy handed over the cigarette.

“Now,” Lydia said to Conner. “This is what I want you to do. See this bill? Can you burn a hole through it?”

She held the bill out to him, flat and stretched out tight. Her hands were positioned in the right place—one holding one edge, the other at the edge, but in the middle.

“Now,” she said. “I want you to push the cigarette through. Slowly, mind.”

Good. So far, things were working well. “You can let go now,” she said then subtly repositioned her hands on the bill.

“See how the cigarette’s halfway through,” she said.

Conner gave a sound of agreement.

“Do me a favor,” she continued. “Grab the cigarette from the bottom. Under here. Carefully, so you don’t hurt yourself. See how there’s the hole? Pull, pull.”

Conner pulled the cigarette from the bottom. With the smallest of movements, she squeezed the paper around the burn hole. Then she gave the paper what she hoped was an invisible massage. Psyching herself up, she slowly flipped the bill to the other side. Then she ran her hand over the paper.

Casually, she handed him the bill. “Check. The hole’s gone. See.”

“There’s no way she could have done that,” Conner announced to the crowd. “It’s magic.”

The audience laughed hard, clearly drinking him up. They were enjoying him more than they were enjoying her, she thought. How had he managed to have more charisma than her when she’d been working on her stage presence for years?

He stepped up to her. “You’re beautiful. You know that? Let me take you on a date.”

He’d probably meant to say this softly, but he was standing so close to her that her headset picked up on his words and broadcast them out into the theater. The audience lost it and collapsed into thunderous laughter, which echoed around the auditorium. Some people even whooped. Lydia felt her face turn as red as her hair. As cute as he was, she couldn’t risk being around him anymore, not for a second longer. He was a hair’s breadth away from ruining her show, the most important thing to her in the world.

Then she panicked that the audience might think that she was a grouch. “When the show’s over, I’ll be vanishing,” she quipped. To her relief, the audience laughed. Yay, managed to get them back on side.

Conner stood looking so crestfallen that, for a second, she felt sorry for him. Then her resolve hardened. After what had happened with her dad, she couldn’t trust him or any man. She had to get him off her stage. 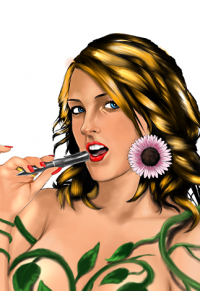 British-born Larissa Vine spent way too long traveling before settling in Vancouver, Canada. Now she lives close to the ocean and the mountains with her ever-patient family and her army of cats. Larissa tries to write what she loves to read – books which are tender, cheeky, even dirty sometimes. Books which are, above all…fun!

Share what you thought about The Magician and her Playboy and earn reward points.

Other books in the Women on Top seriesView Series Page

Buy Now: £2.99
The Plumber and her Billionaire
Larissa Vine

Buy Now: £2.99
The Comedian and her Caveman
Larissa Vine

Buy Now: £2.99
The Ghost Hunter and Her Guy
Larissa Vine