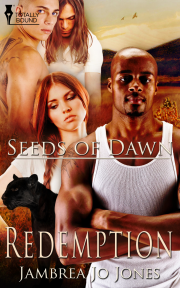 Book 5 in the Seeds of Dawn series

Redemption through love is the greatest gift of all.

Ive Sheppard travelled a great distance to save a man she'd only dreamt about—her mate. Now she is journeying to Africa to save not only his life, but his soul without losing her heart in the process.

Djimon is lost. For centuries he was locked inside his body while an evil spirit took over and controlled him. Now the spirit has been banished and Dji is lost. The horrors he witnessed won't go way and he has no idea how to redeem himself.

Greycen Sheppard is Ive's twin brother and when she left he followed only to find what he'd thought would never be his—a mate.

Peter Tyler has had a rough life, thrown out of his birth pack for being gay and wandering the world searching for himself until he finally finds the Master pack and is accepted for who he is, not who he's attracted to. When Grey shows up, the impossible is right in front of him, but can his heart believe that a gay man can have a mate?

Four lives will be forever changed—but will love be enough as they struggle through captivity, past prejudice and unimaginable horrors to fulfil an ancient prophecy.

Reader Advisory: This book has a secondary storyline with a M/M relationship

"I may be going on this trip to help out, but make no mistake about it, I’m not here for you." Peter Tyler declared to Greycen Sheppard before stepping on to the plane.

Damn his alpha for pairing him up with Grey on this rescue mission to save the missing pack members who’d left for Africa not so long ago. The pack needed to stop with the matchmaking. Peter would never have a mate. That had been beaten into his head time and time again by his family. He was an abomination no matter what Russ—the pack leader—or the others said.

Who cared if he thought Grey was hotter than hot with his bright blue eyes and shaved head? Who cared if every time he was in touching distance of the man he wanted to wrap himself around that thick muscular body and fuck for days?

He desired Grey more than he really cared to admit—even to himself. But he wasn’t playing into the whole mating thing. He’d help Grey get his sister, Ive, back and that was it. He was there to protect Grey—no, not that, he was there to retrieve the other pack members. Yes, that was his goal and if he watched over Grey while doing it that was his business and no one else’s.

"Whatever you say, man. I’ll let you have your way for now because I’m worried about Ive, but after this little trip is over, you and I will be having a serious talk."

Peter jumped out of the seat he’d just got comfortable in to confront Grey.

"Who the hell do you think you are? I mean, really? All you want is a piece of ass and I seem to be handy. I’ve already told you—fags don’t get mates."

"You keep telling yourself, sweetheart."

Peter moved closer and loomed over the other man, one of the advantages of being so freakishly tall.

"We’re gay and I’ll say it one more time so listen closely. We. Don’t. Get. Mates. Mating is for breeders. Didn’t you get the memo?"

Peter shouldn’t have been as worked up as he was, but he hated the ache in his chest when he was near Grey and it pissed him off no end that the fox shifter was so casual with his sexual orientation.

"I don’t know who screwed you over, but you have a lot of learning to do." Grey glared up at him, not backing down an inch. God he was sexy. Peter leant down and nipped at Grey’s lips in a show of aggression. Grey growled and opened his mouth as if expecting a kiss. The two breathed in and out, neither moving to break whatever spell they were under. Grey licked his lip and stared into Peter’s eyes.

"Please buckle in. We’re getting ready for take—off."

Peter backed away and moved as far from Grey as he could get. He’d started to shake and needed to sit down. Confrontation wasn’t his thing, but something about Grey seemed to bring it out of him.

Grey cleared his throat like he was getting ready to say something. Peter glared at him. He was done talking for now. He’d focus on what Bella, the Masters’ pack seer, had told him. It wasn’t much to go on. Joy, one of the four—member team who had been sent to Africa in the first place to dispose of an evil vessel that had taken over another shifter, had magically activated a necklace, flashing out a distress call. The team consisted of Joy and her mate Zareb, along with Ive and her mate Djimon. Djimon was the one who had been infected with the Vessel. It was a long boring story that he didn’t know all the details to, just what he’d heard.

Peter had no idea what they would find when they got there. He hoped it wasn’t the corpses of pack mates. He could handle just about anything, but not dead bodies. He’d seen enough of those to last him a lifetime.

Not wanting to think about his past, he moved his gaze to Grey. The one thing he could look at for days. The man was built with muscles everywhere. His reddish hair had been buzzed close to his head and Peter thought he’d glimpsed a tattoo or two when they’d shifted for their last run.

Looking wasn’t the problem. Taking action was. Hell, he knew what to do. He’d just never had the chance to experience it. Sex wasn’t an option for him. When he’d first figured out he was gay, he’d been scared shitless. Fifteen and knowing he wanted cock not pussy wasn’t something he’d relished figuring out when people were killed for less in his pack.

And now he was back to thinking about things better left buried. Until Grey had shown up he’d been able to lead a pretty normal life. Russ, the pack Master, had accepted him when he’d asked to join the pack. He was never left to feel unwanted. His hand was a perfect companion. He didn’t need sex, not when he had a family again. One who seemed to love him for just being him.

"Are you going to sit there and brood the whole way to Africa? If so, it’s going to be a long trip."

"I’m not here for your amusement," Peter huffed.

Share what you thought about Redemption and earn reward points.