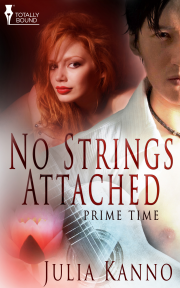 Book 1 in the Prime Time series

She's a puppet on a string—a guitar string, that is.

So why Stephanie Spiegel is standing in the middle of a rock concert, suffering the stench of sweat and stepping in puddles of only God knows what is beyond her. But then, if 'something' hadn't come up—as usual—her ex-husband Jacob would be doing the honour of escorting their teenage daughter, Amelia. The real mystery lies in how she's going to continue to keep up the charade of emotional stability, but as fate would have it, as soon as she's talked herself down from a mental ledge, she lays eyes on the lead guitarist for 'Whatever They're Called'.

There goes what little sanity she's managed to hang on to. Having won backstage passes along with the tickets, Amelia and her friends all but drag Stephanie to meet the band. And, lo and behold, Ren is every mother's worst nightmare—he's a young, handsome, arrogant, talented, arrogant, witty, arrogant rock star. Oh, and as if the man wasn't infuriating enough, Stephanie can't seem to keep her eyes off him long enough to walk without tripping. When she finds herself alone with him, sparks fly. And before she knows it, she's entwined in his arms, feeling safe and desired for the first time in a very long time. She finds herself submitting to his every desire like a puppet on a string—a guitar string, that is.

Reader Advisory: This book contains hot, steamy sex between an older woman and a younger man—including mild breath play and the titillating risk of being caught in public. On a less sexy note, the story also includes the horror of a mother inadvertently walking in on her eighteen-year-old daughter having sex…which is a nightmare for all involved!

'People can't just be tied together. They have to connect. Otherwise, they'll find themselves bound by hand and foot.'—Ai Yazawa, Nana

The Easter bunny, great credit card interest rates, and prizes promised by cereal box contests-some things just weren't supposed to happen, which was why Stephanie Spiegel couldn't believe she was standing in the front row at a rock concert.

Music barrelled out of the speakers, torturing her jazz-cultured ears until she was sure they'd burst at any moment. Dear God, when did this racket become music? Stephanie's grip on her designer handbag tightened as she gritted her teeth. It was nothing but noise, banging and garbled words the lead singer managed to squeeze in between howling monkey screams.

What the hell was I thinking? She'd learned a long time ago the only things teenagers were interested in were the things that drove their parents to distraction. Stephanie slanted an arch look at her daughter. Sandwiched between her two high school best friends—Sandra and Vanessa—Amelia clung to the front of the stage, screaming with as much vigour as the rest of Whatever-They're-Called's fans.

A loud screech sounded through the massive speakers set up on either side of the huge, smoking stage, and she nearly keeled over in horror. I'm in hell. For the umpteenth time since Stephanie had stepped into the auditorium, she cursed Crunchy Wheats and their damn contest. When Amelia had come screaming into the house, shaking a sheet of paper and a handful of tickets, Stephanie had made up her mind, right then and there, to boycott the inconsiderate bastard cereal company.

If it hadn't been for them, she'd be in the comfort of her home, nursing a nice glass of red wine as she read her book club's latest selection. Or maybe she'd be going over the event plans for the Ferguson banquet. Who knows, she might even be learning how to knit! But, no… Instead, she was standing in the middle of a bunch of screaming ninnies, and she was being forced to endure the stench of sweat and something else that reminded her suspiciously of urine.

God, grant me patience… She sucked in a deep breath and tried to distract herself from the chaos by creating a mental grocery list of the things she'd need for tomorrow's dinner party.

There was another disappointing thought.

Tomorrow she'd be forced to play host to her ex-husband and his new wife. Stephanie scrunched up her nose. Bastard. If he'd been nearly as responsible as he liked to claim he was, he would've been the one standing here in this throng of madness instead of her. But no, he'd made a huge deal of wanting to be the one to chaperone the girls and, of course, had called Stephanie at the very last minute to cancel because 'something' had come up.

Stephanie narrowed her eyes. 'Something' always came up.

'Something' was the reason they'd finally filed for divorce after ten years of marriage. Despite the righteous annoyance gnawing at the sides of her patience, a twinge of resignation shot through her chest and she blew out a breath. Jacob was never going to change. She knew that. Actually, neither of them would change. He would always be the fun, wild one. And she'd always be the responsible, rigid one. It was no wonder their marriage hadn't worked out.

Opposites attract—my ass. With a heavy sigh, she cast a glance at her daughter. Amelia beamed with excitement and happiness as she and her friends strained to get even closer to the stage. Stephanie smiled. At least Amelia was happy.

Her daughter hadn't taken the divorce very well. She'd been so excited about the concert that, when Jacob had called to cancel earlier, Stephanie hadn't been able to bear the idea of disappointing her. Well… I suppose this isn't so bad. She crossed her arms and scanned her surroundings. The fence that had been erected around the front row slash VIP section kept the raging hordes of fans from crushing her and the girls to death. And it wasn't as if the concert would be longer than an hour or so. Stephanie flicked her wrist and squinted down at her watch in an attempt to glean the time. Oh, let it be so…

The opening band finished their last song and the crowd roared in approval. The sound rattled Stephanie's eardrums, and for a moment she wondered whether she would just keel over. No such luck. All it took was a few blinks and she was right as rain. Damn it. The crowd continued their applause, although, judging by the shift in the atmosphere the praise had more to do with the impending headliner's performance than the opening band's show. She raised her eyebrows and took a deep breath that very quickly turned into an even heartier sigh. Only an hour or so. I can do this. She glanced at her daughter and smiled. I can do this for Amelia.

Stephanie caught a wolfish grin from the corner of her eye, and her musings screeched to a stop. Two college-age boys, both carrying suspicious-looking red plastic cups, stood a few feet back from the girls and were in the process of eyeing them like they were, in fact, the three little pigs. Apparently noticing them, Amelia tossed a saucy little look over her shoulder and smiled. Stephanie watched the whole exchange in absolute horror, and for a moment, the only course of action she could think of involved striking those two bumbling hooligans down with her purse.

Share what you thought about No Strings Attached and earn reward points.