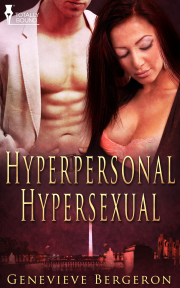 Juliette Bresson won't wait around for 'the man of her dreams'. That's because the heroine of 'Hyperpersonal/Hypersexual', knows that fantasies hardly ever manifest the way we intend.

Instead, Juliette—an energetic university instructor and savvy political consultant—imagines her men exactly how she wants them, and she forgoes real sex altogether. But eventually starved for tangible love and romantic excitement, Juliette replies to a string of anonymous yet provocative emails and instant messages she receives in response to an Internet forum post. She suddenly finds herself the recipient of a barrage of oversexed texts, salacious instant messages and requests for a face-to-face meeting. Finally, after a tantalising sexual encounter with her digital admirer, Juliette begins to think that real sex can be too good.

Now afraid of ruining her reputation, losing her job and her focus—or worse—Juliette must decide whether to give herself permission to love a lying man, a man who can fulfil her every sexual fantasy—or reject him altogether and cling to dreams that seem perfect but are really only mediocre, at best.

The hyperpersonal model of communication is an outgrowth of Daft and Lengel's 1980s—inspired media richness theory, which applies to electronic modes of communication. The hyperpersonal model affords users various advantages, including the ability to hone and represent an 'ideal' persona based on strategic pre-planning. Similarly, 'poor' media, such as texting and instant messaging, indirectly encourage users to project their own ideal formations on to their conversational partners. In other words, we imagine our partners however we want, whatever way we want, in whatever position we want, and let our deepest, darkest desires run wild.

DC_falcon01: bout time u handed that one over

Juliette dropped her chin into her upturned hand, sighed, and suppressed a half giggle, half scoff as she watched the new message scroll up on to her IM client. Had she really just given her phone number to a stranger? She was supposed to be grading papers while she was in her office, she thought, not chatting with secret admirers online.

A 'rando', her friend, Nicole from Chapel Hill, would say, even though Juliette had been chatting with him for almost three days now. He hardly counted as 'rando'. Anyhow, 'rando' was a face-to-face thing, not an Internet thing. Internet, she told herself, would be something a little different. She cocked her head to one side, thinking, and 'anonymous' was the first word that came to mind. 'Rando' might have been more fun, but anonymous was the strict communications term—the boring communications term. Juliette shrugged. Her netiquette—her knowledge of 'Internet etiquette'—was one thing she prided herself on.

But then again, maybe that was just what girls at her university liked—the 'randos', the anonymous ones. No commitment, complete anonymity, the freedom to do, say, pretend to do whatever they wanted. Now that was sophistication, Juliette thought, pleased with herself for rejecting old—fashioned traditionalism. She certainly wasn't one of those North Carolina Southern Belles.

But Juliette had to be concerned about her freelance communication consultation, her reputation—and her students. She was the best in the business, a dynamic adjunct professor, and all before she'd turned twenty—eight. She couldn't risk those things by pretending, by being raunchy online. Anonymity only went so far.

She certainly didn't have a prosaic job—at least, that's what she'd told her friends back in Colorado. She'd had a tougher time convincing the ones who lived just a few miles from her in DC. Everyone here was a teacher or a consultant of some kind, and more than one had had a fling with a senator or congressman. Sometimes twice. But Juliette herself couldn't claim the honour. Rather than cavorting, she spent her nights writing about how to communicate rather than actually doing it. She was content to remain anonymous and safe. In a sense, concealing your identity was like going unchallenged, unquestioned. There were no comparisons online. Because, after all, who could ever know what was true and what was a lie?

Nicole gave her hell about it, said Juliette needed to take chances. But chatting, and with a guy who'd lifted her email address from an online forum? That, Juliette hadn't even expected.

She straightened her back, pulling herself upright again. Her lips tugged to one side in a wry smile, and she poised her lithe, narrow fingers over the silver keys.

Genevieve Bergeron has been an avid reader and writer of digital fiction for nearly two decades. A veteran journalist, children's author and professional communicator, Genevieve now spends her time reading and writing hi-tech inspired romance and erotica, in addition to working a fast-paced day job as a communications director at a U.S.-based national nonprofit.

Genevieve, originally from Huntsville, Ala., has lived in New Orleans and Paris, and now resides in Washington, D.C., where she does her best to avoid any steamy political scandals. She holds a degree in International Communications and French from Tulane University and a Master's Degree in Strategic and Digital Communications from Georgetown University. She loves collecting condoms, cooking for friends, and trying boxed wines.

Share what you thought about Hyperpersonal Hypersexual and earn reward points.